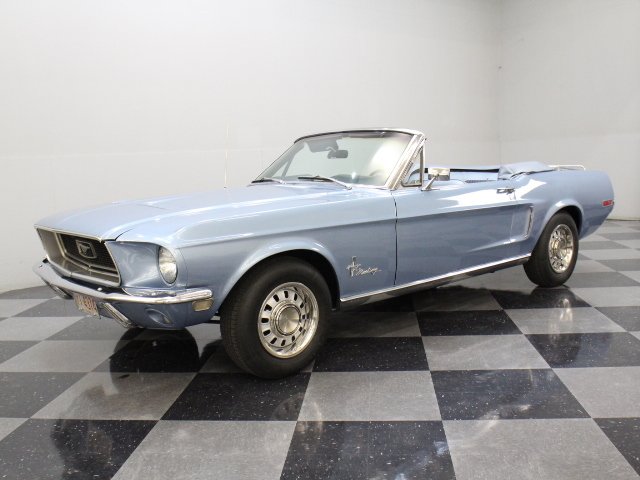 Who doesn't love Mustang convertibles? From the first Wimbledon White ragtop off the assembly line in early 1964 to this slick 1968 convertible, it's hard to go wrong with one of Ford's early ponies. This one also offers a snappy 289, a handsome two-tone interior, and a great playful personality that makes it a car you'll drive every time the sun is shining.

Brittany Blue (code Q) is this Mustang's original color and it looks as good here as it ever did. Subtle and sophisticated rather than muscle car brash, it seems to emphasize Mustang details like the side coves, the deep headlight buckets, and the concave tail panel that houses the taillights. The bodywork is also clean and looks great, which is what you'd expect from a car from down south. The two-stage paint gives it a much deeper shine than the factory enamel ever offered, but you have to catch it at just the right angle to see how wonderfully shiny it really is. This one also offers a cool trunk-mounted luggage rack that looks great, although I wonder if anyone has ever strapped luggage to it. All the brightwork appears to be new or restored, including the bumpers, grille, windshield surround, and Mustang emblems on the fenders. Seriously, just look at the reflections in the bumpers-impressive, right?

The freshened interior is nicely detailed, with snugly fitted two-tone seat covers, matching door panels, and carpets with the correct weave. Ford's Mustang was growing up, so the interiors not only got more spacious, they were more luxurious as well. The gauges appear to be original and in excellent condition, with everything working as it should and new bezels around them to add some sparkle, while goodies like a center console, woodgrained steering wheel, and an AM/FM/cassette stereo makes this a car that is a pleasure to drive anywhere. Recent work includes a new heater core and levers, so there's one major headache you'll never have to worry about, and overhead there's a pretty new light blue power convertible top with a matching boot.

Power comes from Ford's famous 289 cubic inch V8, which was rebuilt a scant 16,000 miles ago. The 302 would eventually supplant the 289, but it doesn't quite rev like a 289, which in my opinion greatly enhances the driving experience; it just sounds right. The engine was painted when it was rebuilt and is showing signs of use, but there are no major deviations from stock, so the driving experience is exactly what you'd get in 1968. The C4 3-speed automatic transmission was rebuilt at the same time and clicks through the gears without apparent effort, spinning the original 9-inch rear which is full of 2.79 gears, so this pony just loafs along on the highway. Underneath, the chassis is structurally solid with a rebuilt rear suspension and a great-sounding custom dual exhaust system. Handsome styled steel wheels wear 14-inch radials, but the original steel wheels and dog-dish hubcaps are included.

They can't all be Shelbys, and why would you want them to be? This Mustang convertible offers a ton of open-air fun for not a lot of money, with a great V8 soundtrack thrown in for free. Call today! 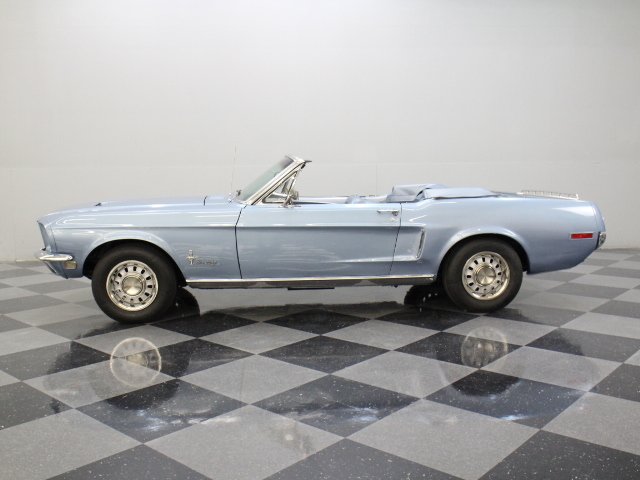