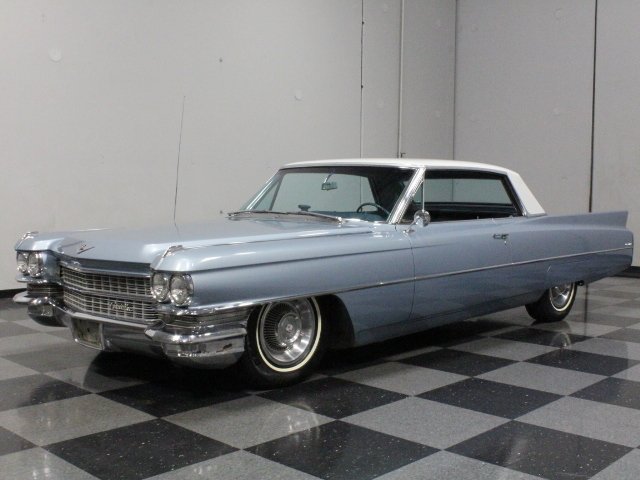 Am I crazy or is this a ton of luxury car for a bargain price? For reasons that aren't altogether clear, early '60s Cadillacs are screaming bargains, but you can't argue with the stunning good looks and luxurious appointments of this '63 Coupe DeVille. And it probably doesn't hurt that Don Draper drove one just like it in "Mad Men," right?

Chrome and fins, there's no mistaking this Cadillac. It looks like a rock star from any angle and it's one of those rare old cars where nobody will ever ask, "Hey, what is that?" because it's so obviously a Cadillac. It appears to be a largely original car that's had perhaps one repaint somewhere along the line, so it's not perfect, but man does it look good cruising down the street! The Benton Blue paint is joined by a white top that's got just a hint of pearl in it, so it looks spectacular in the sun without being too showy. Instead, it's a paragon of good taste and impeccable tailoring; just look at the crease that pulls off of the headlights and the way the roof shows just a hint of angularity. It doesn't look to have ever required major surgery (man those are some straight quarter panels!) and all the panels fit quite well. And yes, it's a Cadillac, so chrome is a factor, with most of it being original stuff that's in above-average condition.

Cadillac was the epitome of good taste in the early '60s, and the interior shows especially well. It's likely original, and in the days before fake wood and goofy velour seats, this is what luxury really looked like. The button-tufted seats are a beautiful combination of leather and medium blue fabric, and the matching door panels are trimmed in chrome, not plastic. The handsome instrument panel is centered around the driver, with a skinny steering wheel that's easy to see through to the wide speedometer that spans the width of the instrument panel. Noteworthy options include power windows, a tilt wheel, factory A/C and an Autronic Eye sitting atop the dash (which sadly is not operational, but that's typical). The carpets might be showing their age, but given the authenticity shown in this big coupe, I think it would be a mistake to try to replace them. Instead, enjoy the preservation and the ride. And, of course, the trunk is simply massive with original mats and a full-sized spare.

Cadillac's 390 cubic inch V8 was a stout performer, moving more than 4000 pounds of steel with effortless ease. It's not a drag racer, but if you want to cruise across the desert at 80 MPH, few cars can do it better. The engine bay is also quite original and is clean and well-maintained, if not detailed for show. On the other hand, it runs so well that some touch-up paint and some detailing would really make this car sing and all the original equipment is intact so it works as intended. The Hydra-Matic automatic transmission is unobtrusive and the single exhaust has a big muffler so this Caddy just whispers along. The ride is as plush as you'd imagine, and the 2-inch lowering job doesn't change that although it does have a very cool look. Original hubcaps are fitted and live inside a set of 235/75/15 General whitewall radials.

This is perhaps the biggest bang for the buck in our showroom right now and I'll wager that it won't last very long. Call today! 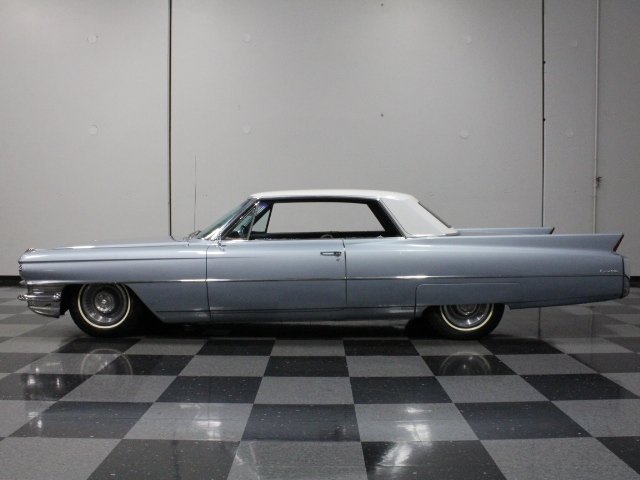