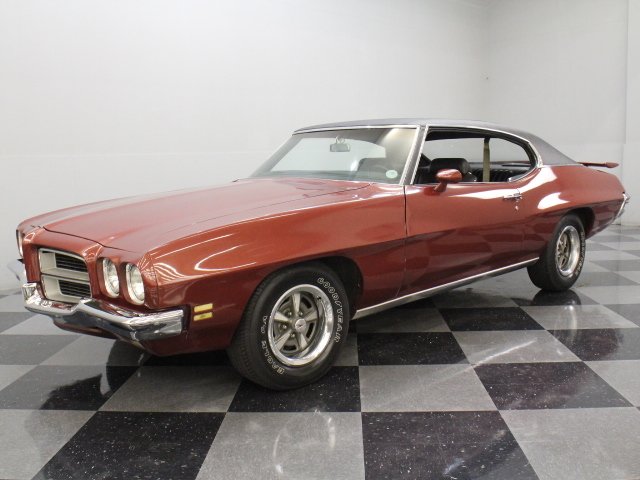 If you're looking for GTO looks on a budget, this 1972 Pontiac Lemans definitely delivers. The body shell is, of course, the same, and it still packs a potent, freshly-rebuilt 350 and overdrive transmission, so it'll run with a genuine Goat without breaking a sweat. Looks good, goes fast, costs less-how can you lose?

The paint job was done a few years ago, but the maroon finish is holding up quite well and combined with the vinyl top, it looks a bit formal on the sleek Lemans bodywork. Fit and finish are quite good with doors that close more easily than just about any other GM car of the period we've experienced, indicative of both quality workmanship and a solid car that hasn't been bent or rusty. A wing was added to the rear deck but since it's an OEM piece, it looks right and fits well. Up front, it's nice to see a stock Pontiac grille instead of a fake GTO-look, and even with the chrome bumpers, this one looks fast just sitting still. There's not a lot of trim on the Lemans, but it definitely looks like this one got a de-badging during the restoration that only enhances the sleek look. The black vinyl roof is also in great shape with no popped seams or wrinkles, and the usual concerns about rust underneath are a non-issue with this southern A-body.

Dressed to play, the bucket seat interior is just as functional and inviting as any in a GTO. The seat covers show minimal wear and it's quite possible that things like the door panels and dash pad are originals, with the back seat looking like new. This Lemans carries cool upgrades like a factory tach in the dash as well as the same engine-turned panels that defined Pontiac's top performance cars for more than a decade. The cool 3-spoke wheel looks aftermarket but is an optional sport wheel, and the center console houses a shifter that now manages four gears instead of just three. There is factory air that just needs a recharge, and the original radio has been dumped in favor of a newer AM/FM stereo unit from Classic Audio that still fits like it belongs there. There's no mat in the trunk, but that also means there's nothing to hide, and as you can see it's solid with no worries for the next owner.

The engine is a date-code correct Pontiac 350 that was rebuilt 2000 miles ago and fortified with a lot of upgrades that counteract the anti-horsepower measures of the 1970s. The heads are reworked 428 units, there's a Ram Air III camshaft in the center of the block, and an Edelbrock 600 CFM carb feeds the beast. The great thing is that everything looks factory because it is, although there's a bit more chrome in there than there would have been in 1972. It's backed by a new 200R4 4-speed automatic overdrive transmission and a set of 3.73s borrowed from a Chevelle out back. A recent dual exhaust system with glasspack-style mufflers gives it a very racy soundtrack, and the correct Rallye II wheels won't raise any eyebrows with purists, even with 225/70/15 Goodyear radials wrapped around them.

If you don't care about pedigrees and investments and just want to get to the business of having fun, this Lemans is your car. Call today! 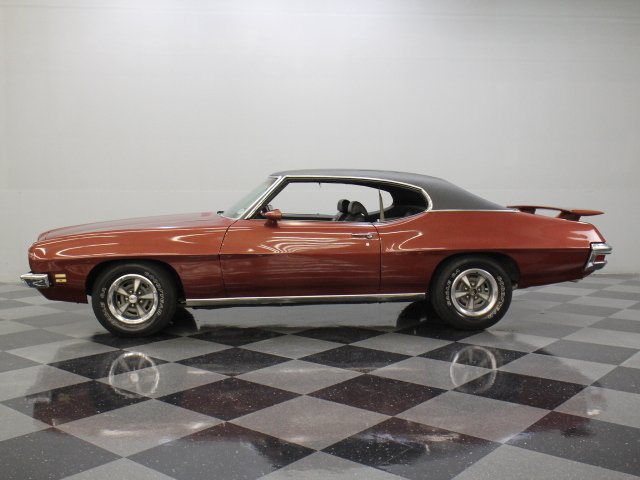