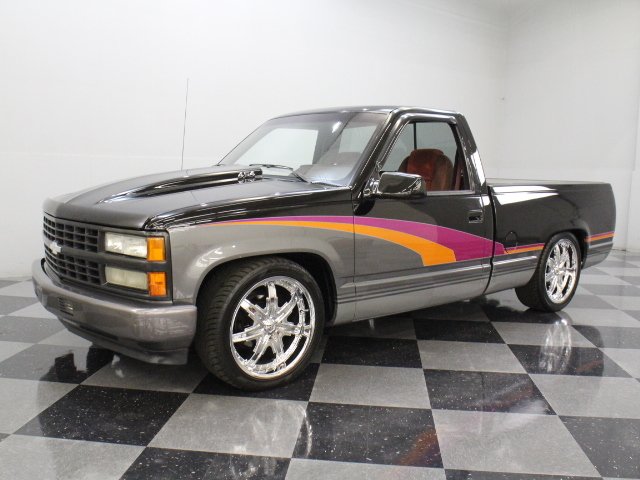 Underneath that trick paint and multiple body mods, there's a thumping 1991 Chevy 454SS pickup, making this the total package if you're a fan of the '90s. Nicely built with a perfect stance and still ready to rumble, this is an A-list sport struck built around the first of the high-horsepower haulers.

Originally dressed in basic black, this 454SS has had a major makeover that totally transformed the former low-key player into something that headlines local cruise nights. The list of modifications is extensive, ranging from the trick front bumper with recessed fog lamps to the cowl-induction hood to the rear roll pan with integrated taillights, eliminating the need for the originals. It retains the stock blacked-out grille and perhaps that black paint is factory-issue, but the bright graphics on top simply pull your eyes across the chunky pickup's sheetmetal. Workmanship on the alterations and particularly the paint is extremely good, with crisp lines and a lot of attention to detail-just check out how the graphics wrap around the doors and into the jambs! A flush-mounted bed cover provides a low-profile look and transforms the bed into a dry, secure trunk area that can still haul anything that'll fit inside.

Most of the original interior is intact, from the red cloth upholstery to the original carpets, but upgrades include the billet aluminum dash inserts and an overlay for the gauges that gives them an entirely new look. The fold-down center seat back doubles as a handy armrest and cupholder, complete with Chevy bowtie emblem and a slick Boyd Coddington billet wheel adds some much-appreciated sparkle to the otherwise fairly serious interior. Most everything was standard on the 454SS, including A/C, power windows and locks, and a tilt wheel, and the original radio has been replaced by a modern AM/FM/CD head unit in the center of the dash. Tinted glass and a sliding rear window round out the impressive interior, which looks awfully good for being 22 years old, don't you think?

But the real point of interest in this truck is the thundering 454 cubic inch big block V8 under the hood. This is the truck that single handedly created the muscle truck segment that's still going strong today. Between the massive torque and the relatively lightweight C10 short bed/regular cab setup, it would actually yank the truck up to speed with each transmission shift rather than allowing the weight of the truck to bog the engine down. A s you'd expect from a truck of this caliber, the engine bay is immaculately dressed in black with plenty of chrome and just the right dashes of color. It's still fairly stock-which is plenty, believe me-but includes upgrades like a Flowmaster muffler for the factory dual exhaust system that sounds wicked. It starts quickly and easily thanks to reliable GM engineering, and with the 700R4 4-speed automatic overdrive transmission, it really makes for a pleasant cruiser on the highway. The 454SS already sported a somewhat lowered stance, so they merely stuffed the wheel wells full of 20-inch chrome alloys and giant 275/40/20 performance radials.

The look is awesome, the horsepower is addictive, and the truck still works like a truck. What else could you want from such an affordable custom? Call today! 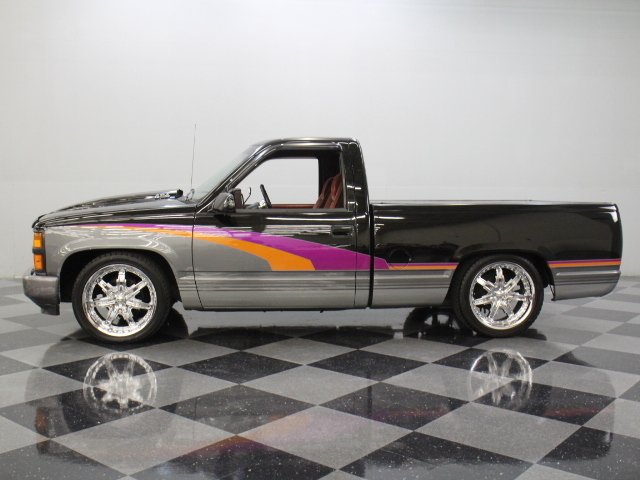