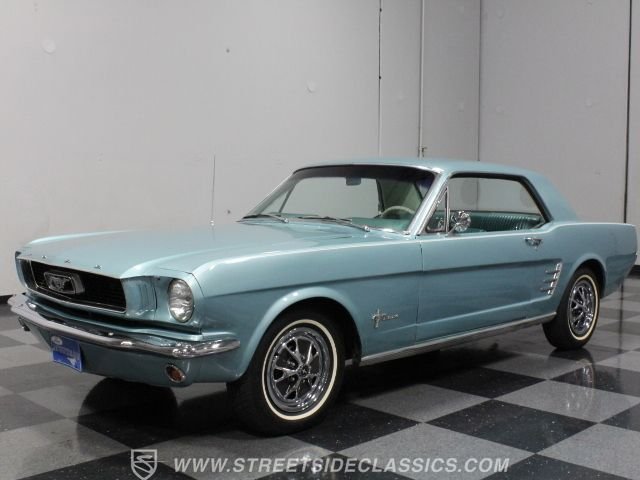 Early Mustangs are still one of the very best ways to get into the old car hobby for not a lot of cash. This 1966 Mustang coupe is one of those cars that everyone will love, parts are available just about everywhere, and for the money you just won't be able to find a more iconic car to put in your garage.

Code U Tahoe Turquoise is this pony's original color, and for Mustang fans it's a favorite. Understated yet unusual, it looks bright and clean on this affordable coupe. It was repainted a few years ago and is showing a few signs of age, but then again, a Mustang with some character lines can be extremely appealing. Nothing about the original design has been changed, so everywhere you go people will tell you what an awesome car this is and how much they love the color. Panel fit is decent all around and with a pinstripe highlighting the peaked line running from nose to tail, the car's long nose/short deck proportions are emphasized. Nice chrome bumpers, the simplified 1966 grille and running pony emblem, and those instantly-recognizable taillights all give this Mustang a familiar look that will win its share of admirers.

They splurged on a two-tone Pony interior for this neat little coupe, and the contrast inside is clean and cheerful. Bucket seats were standard on Mustangs, as were seat belts, the first American car to make them standard equipment. The seat covers are relatively recent, along with matching carpets and door panels to complete the ensemble. In 1966, all Mustangs received the 1965 GT instrument panel with five gauges and a large central speedometer, and while the gauges themselves are unrestored and a bit haggard, the overall look is inviting. A newer AM/FM/CD stereo head unit fits into the original radio's slot, so you at least have some variety in the entertainment department, and it powers a set of speakers built into the rear parcel shelf. The trunk is also properly outfitted with a reproduction mat that really cleans up the cargo bay.

The T-code 200 cubic inch inline-six should not be overlooked by enthusiasts, and there's a growing group of guys who recognize these sturdy engines as more than just inexpensive alternatives to V8s. Wearing Ford Blue paint and all its original equipment, it's a nice runner with an unobtrusive demeanor. It hasn't been modified during its 50 years of life and there are plenty of signs of conscientious maintenance over the years. One important thing to note is that service access on the six is unbeatable and parts are insanely inexpensive and easy to replace, so keeping this one in top mechanical condition should be a breeze. The three-speed automatic transmission means that driving this one anywhere is as easy as turning the key and 3.20 gears out back promise a nice compromise between performance and cruising ability. The underside is just as clean as you'd hope, even for an affordable Mustang, and the single exhaust system has a proper six cylinder grumble to it. It rolls on 14-inch wheels with hubcaps that look deceptively like the optional styled steel wheels and a set of 195/75/14 whitewall radials.

This is a very affordable early Mustang with an eager personality and a handsome look. Don't overlook it because of what it isn't, embrace it for what it is: a cool old Mustang that's surprisingly practical. Call today! 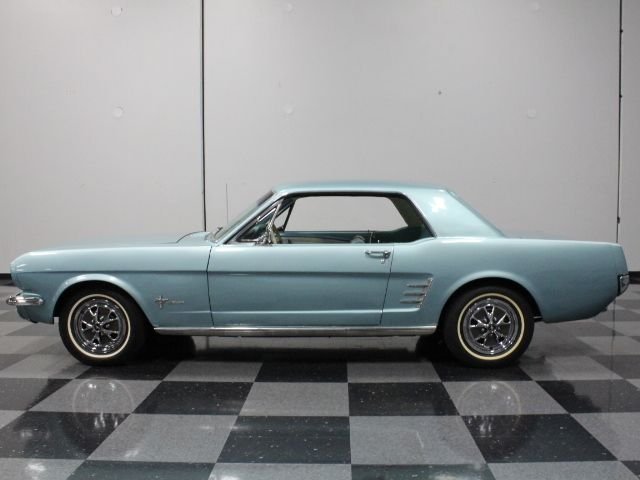