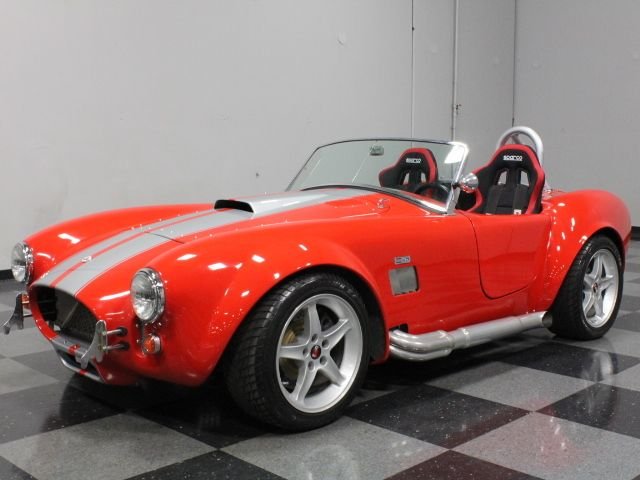 There isn't a gearhead alive who hasn't tossed around the idea of building his own Cobra. Sure, it's iconic, but the appeal is still as visceral today as it was 50 years ago: two seats, a big V8, and little else, the Cobra is perhaps the purest distillation of automotive performance yet devised by man. But why waste the time and money building your own when great Cobras like this stunning Factory Five roadster are available for less than the cost of doing it yourself.

Factory Five got the formula right, and the proportions of their Cobra are pretty darned good. If you've never driven an original (almost nobody has), then you don't know how comfortable the Factory Five is in comparison. There's more room in the foot box for those of us with larger than size 7 sneakers, more legroom, and they achieve all this without altering the instantly-recognizable Cobra shape. They also lay down some pretty darned good fiberglass, so the cars are durable as well as iconic. This one was nicely finished with bright red paint that has a great shine along with a set of silver stripes that stretch from nose to tail in an unbroken line. The competition look is reinforced by the jacking stubs in lieu of bumpers, a flip-up gas cap, and a painted silver roll bar that matches the stripes. Lighting uses bright HID headlights, so feel free to hit the streets at night, as well as a set of authentic-looking Lucas-style taillights out back.

Those are body-hugging Sparco buckets inside, and they leave no doubt as to this Cobra's real intentions. Simpson harnesses are probably a good idea when there's this much performance under you right foot, and it'll take a while to adjust to the mind-altering levels of acceleration this car delivers. Other correct details include a leather-wrapped steering wheel and forward-canted Mustang shifter, which now manages a Tremec 5-speed manual gearbox. I'm guessing Ol' Shel' would approve of the car's vintage-looking Stewart-Warner dials, which bear more than a passing resemblance to the ancient Smiths gauges he originally used, including a reverse-rotation speedometer. It's definitely basic, without even a heater or radio, but that's the whole point. Guys who put heavy stereos in their Cobras just don't get it-side pipes are the ultimate soundtrack. Just the necessities and nothing else. It's also nice to see that the trunk was finished with some black carpet to help control noise and heat, and the Optima battery is a smart choice.

Factory Five uses popular Ford blocks, which means that not only are the mechanicals durable, but every upgrade available for a Mustang is a virtual bolt-on. This one offers a built 351 Windsor and a Tremec TKO 5-speed, as well as an Edelbrock intake, Holley 4-barrel carb, and an MSD ignition system to make it run right. Mustang guys will see a lot of familiar hardware under the hood, which is Factory Five's M.O., and Cobra valve covers add a bit of retro styling. The suspension is far more sophisticated than most Cobra replicas, with A-arms and coil-overs up front and a trick independent setup out back, all anchored to a sturdy rectangular steel tube frame. Cobra alloys look fantastic and wear 245/45/17 front and 275/40/17 rear Firestone performance radials. 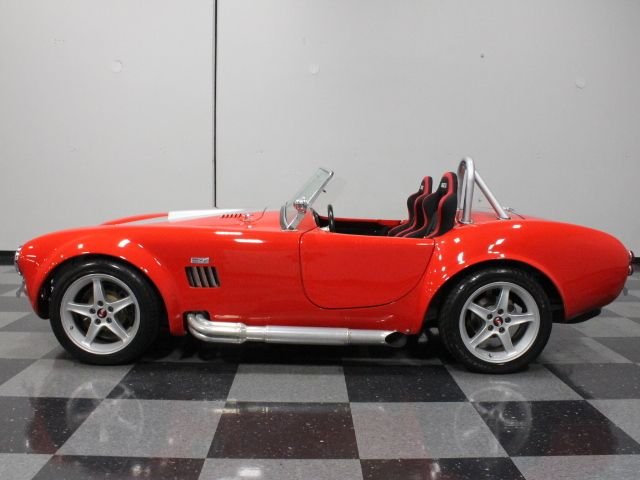