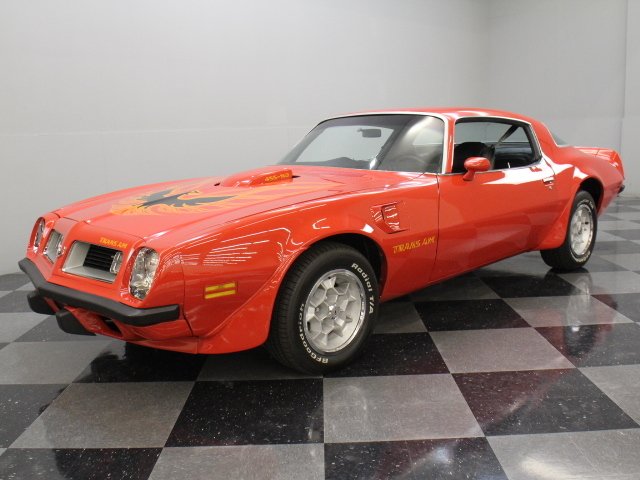 When the 1975 Trans Am debuted, Pontiac said there would be none built with the mighty 455 under the hood. However, midway through the model year, succumbing to enthusiast pressure, the 455 HO did indeed make its way under the T/A's shaker hood scoop. Mated exclusively to a 4-speed gearbox such as in this amazing Buccaneer Red example, it was still a force to be reckoned with.

For many, the 1975 F-bodies are the best of the second-generation, offering the butch front-end styling from the early models, but adding the wrap-around rear window that not only improves visibility, but also dramatically brightens the interior. Buccaneer Red was one of four colors available in 1975, and while this one was originally Sterling Silver, there's simply no trace of the original color, a tribute to the quality and thoroughness of the restoration. The car has already won a bunch of trophies, and the workmanship shows extremely well with straight quarters, big doors that fit quite well, and urethane bumpers and spoilers that seem to defy their age. All the decals are exact reproductions from Phoenix Graphix, including the '455 HO' emblems on the hood scoop, which Trans Am fans will find to be the car's most appealing feature. For a bit of show, the taillights are sequential LEDs that look stock until you hit the brakes or the sun goes down, and the effect is pretty darned slick.

The list of new equipment inside is extensive, and the bottom line is that it's fresh and done mostly to factory specs throughout. New seat covers hug the supportive "MEMORY FOAM" buckets and show virtually zero use since the car was completed a few years ago. The carpets and headliner are also new and duplicate the original materials and patterns as well, keeping everything strictly OEM. The dash continued to use an engine-turned fascia, but sadly corporate policy stuck 1975 Pontiacs with wimpy 100 MPH speedometers with the thought that people wouldn't try to probe the car's outer limits. This car is loaded with options, too, including A/C, power windows and locks, and a newer AM/FM/CD stereo in the dash with a relatively rare factory 8-track proudly fitted at the top of the center console. All the glass is new, the window regulators inside are new, the trunk mat is new, and, well, you get the point. This sucker is fresh, fresh, fresh. Heck, even the clock works!

While the 455 HO was plucked from the Bonneville assembly line and dressed up by the marketing department, there's no arguing with the torque production that only a big block motor can produce. Dressed in Pontiac Turquoise with chrome valve covers, it has the visuals down pat, and again the list of new components is extensive: power steering pump, A/C compressor, belts, hoses, thermostat, clutch, flywheel, axles, bearings, seals, and even the rear brake drums. A Rochester Quadrajet handles the intake side, while Hedman headers feed a Flowmaster exhaust system with correct chrome split tips. A Super T10 4-speed gearbox feeds power to a set of 3.42 gears so it cruises easily, but blasts through the gears in finest muscle car fashion. Factory "honeycomb" wheels look fantastic and wear new trim rings and center caps (with locks!) plus a set of 235/60/15 BFGoodrich T/A radials.

This impressive restoration means that you don't have to do a thing before you start enjoying your new Trans Am. Call today! 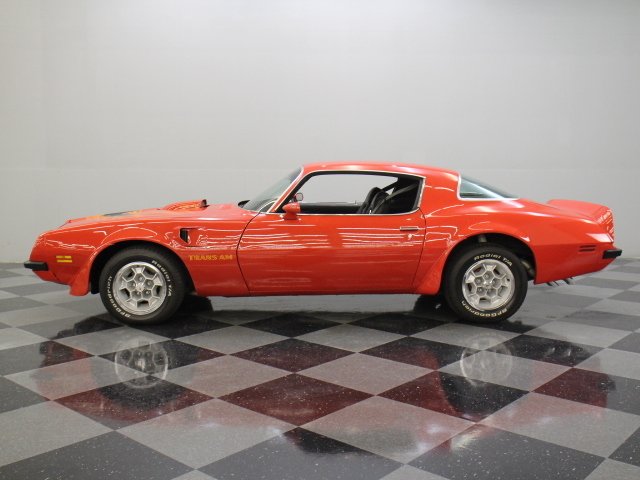