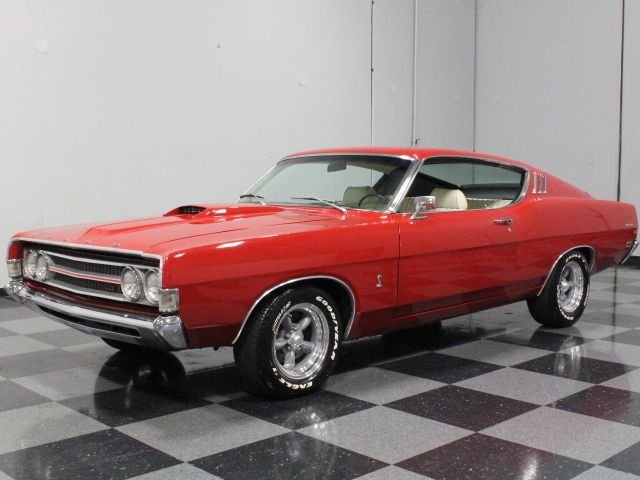 OK, Ford guys, we know you're tired of looking at Chevelles, so this 1969 Torino GT is your response. With a matching-numbers 428 Cobra Jet engine, it's the heavy-hitter in the Blue Oval camp. Better still, it's a bargain compared to its bowtie-wearing rivals and quite a bit rarer to boot!

Born to run on the tracks of NASCAR, it looks fast just sitting still. All the Ford hi-po styling tricks are in place here, including the hood scoop, Cobra badges, and a fastback roofline that's like a XL-scale Mustang. It was restored a few years ago, so it's not super fresh, but the code T Candyapple Red paint shines up beautifully and this is definitely a car with presence. There's a ton of sheetmetal in those quarter panels but it's all quite straight and crisply rendered and panel gaps are good all around. You don't see these cars all that often, so you'll find a lot of enjoyment in the little stuff, from the chrome hash marks on the sloping C-pillars, the grille and the matching insert in the hood scoop, and the lovely tail panel and tight-fitting bumper. A few touch-ups here and there prove that this car has been loved and the overall look is one of a machine that's led a good life and doesn't have to make any apologies.

Bright white is a high-contrast look for the interior, which also features bucket seats and a console. The seats are incredibly bright and clean for their age, and it has recently been fitted with new carpets and a correct replacement headliner that fits well. The instrument panel offers a quartet of round gauge pods seeming to grow out of the dash pad, and the contrast between the black upper and white lower areas is not only attractive but also functional, keeping the glare out of the driver's eyes. The original radio is still in the dash, but now features an FM converter so it has the stock look with a slightly better selection of tunes for the road. The door panels were probably replaced when the seats were done a few years ago and still look great, and unlike the Mustang, this Torino is big enough to have a good-sized trunk without needing a fold-down rear seat. And speaking of the trunk, it's fitted with a correct reproduction plaid mat for a factory look.

OK, the real reason this Torino GT is special can be found under the hood. That's the original, numbers-matching 428 cubic inch V8, and it's been rebuilt to stock specs and highly detailed. Bright Ford Blue paint is augmented by a set of chrome valve covers and air cleaner lid, giving it a bright look that's easy to love. A replacement 4-barrel carburetor lives under that big air cleaner, but the original is included with the sale, and a set of reproduction decals gives it that factory-fresh look. A heavy-duty C6 3-speed automatic doesn't even notice the major torque twisting through it, and the beefy 9-inch rear just shrugs it off when you hammer the throttle. A new Flowmaster dual exhaust system gives it an awesome big block sound and you'll be impressed by how good it looks underneath. Period-correct Torque Thrust wheels offer a more sporting look than the originals (which are also included), and it wears staggered 235/60/15 front and 255/60/15 rear Goodyear Eagle radials.

Documented with an original build sheet and Marti Report, this is a pedigreed big block Ford that delivers in all the ways that matter. Who says Chevy guys get all the breaks? Call today! 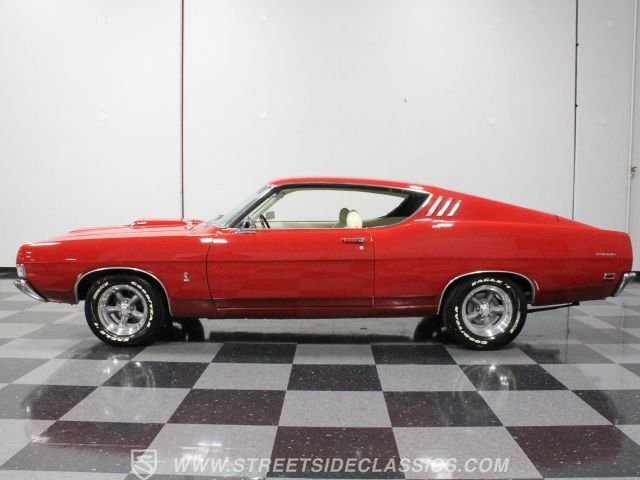