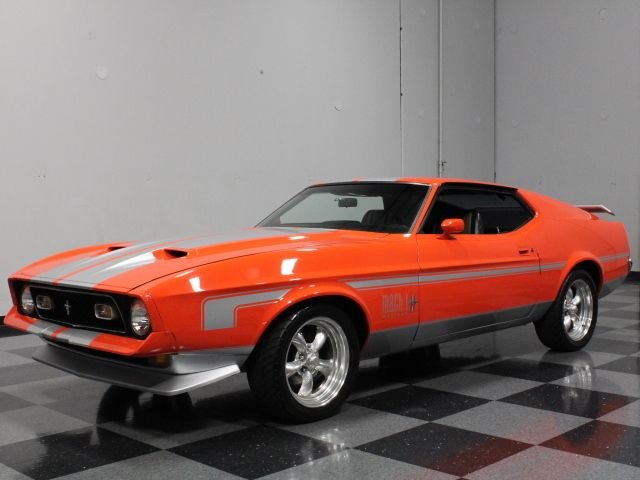 Sorry sleeper fans, this 1972 Ford Mustang Mach 1 is definitely not about keeping a low profile. Instead, the searing orange paint with silver Mach 1 graphics make a statement that practically dares other cars to give it a go. And with a stout 351 and a 5-speed, it'll more than hold its own on the streets and looks fantastic doing it.

Even in 1972, there was nothing as vivid as this Mustang's paint on the Ford color charts, but that doesn't mean the sportsroof body style doesn't look great wearing it. Thanks to a high-grade restoration a few years ago, this slick Mustang cuts a high profile wake through ordinary traffic and if you like the later fastbacks, you have to admit that they don't get much more attractive than this. The NACA (not NASA!) hood, the chin spoiler, and the rear wing all contribute to its high-performance credentials, and for the most part, all that gear is totally functional. Mach 1 stripes were applied to the hood, roof, and deck lid, along with the hockey sticks down the sides, then they were all buried under the clear for a permanent shine. Fit and finish are quite good and the body-colored urethane front bumper was a popular option throughout the industry, giving the Mach 1 a much sportier look than its chrome-laden cousins. Of course, there's still a bit of shiny stuff around the windows and out back, so don't worry, they made sure to buff it up to match the bodywork.

The black interior is fairly stock, a pleasing contrast to the high-impact exterior and a great place to do the serious work of driving. The original buckets have been reupholstered and look quite stock, and when they work this well, there's really no need to replace or upgrade. New carpets recreate the original weave and texture, and the door panels feature wood inserts to add a little warmth to the upscale Mach 1. The instruments are way down deep in a set of round nacelles, but the factory tach has been replaced by an Auto Meter unit that hides in plain sight. A factory center console has one of the earliest armrests that's actually useful as an armrest, and the A/C system has been extensively serviced and now works properly thanks to a new compressor and R134a refrigerant. And yes, that shifter shows five forward gears, complements of a T5 gearbox underneath, a big upgrade if you like to drive.

And you will enjoy driving quite a bit thanks to the burly 351 cubic inch V8 under the hood. Topped by a 4-barrel carburetor and wearing an open-element air cleaner, it has a definitely high-performance look. Ford Blue paint is gone, replaced by more high-impact hues that tie the whole car together quite neatly, inside and out. The exhaust system is by Flowmaster and includes a crossover to maximize torque, and while the chassis isn't detailed for show, it doesn't' have any red flags, either. A fat front sway bar, disc brakes, and a 9-inch rear end are all welcome upgrades on a car that's going to get driven. Pretty Torque Thrust style wheels look great, even on the later body style, and carry 245/45/17 BFGoodrich G-Force T/A radials all around.

If you don't mind the attention, this is a flat-out awesome car to drive. Smartly upgraded but keeping the original feel intact, it represents all the reasons why we love Mustangs. Call today! 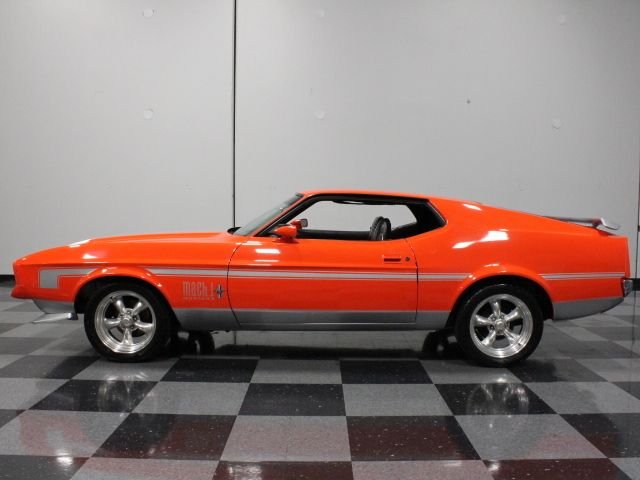