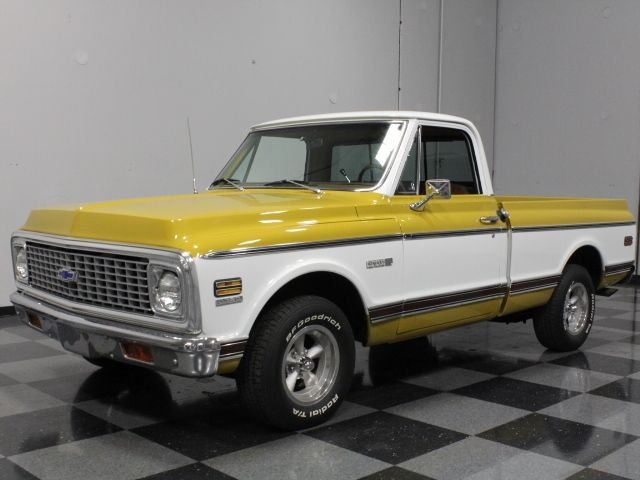 This 1972 Chevy C10 Cheyenne is exactly the kind of truck you would build for yourself. A few smart modifications for easy cruising, a cool stance, and a superb two-tone paint job that lets the original styling speak for itself. This is a no-excuses truck in every way.

Beautifully finished in attractive and period-correct livery, this pickup looks like it's dressed up for a night out on the town, not a set of coveralls for work. The classic shape of the early C10 is undeniably attractive, but when it's wrapped in high-quality bodywork and a OEM-looking white-over-yellow-over-white-over-yellow paint job, it's downright stunning. Look at the reflections in the body's surfaces; there's not a ripple or distortion anywhere, which only means that someone spent a TON of time and money making it look that way. All the factory trim remains, including the cool woodgrained panels on the lower body and tailgate, which are remarkably well preserved or nicely done reproductions. A lot of the chrome is new and everything has a very OEM look to it, so it doesn't look over-done. Simple, yet sophisticated-quite an accomplishment for a pickup truck.

The upscale theme continues in the cab where it appears to be a combination of restored pieces and nice original stuff. A highly detailed seat cover was part of the Cheyenne package and while it may show a bit of age, there's really no reason to replace anything. More woodgrain appears on the original door panels, which also appear to be nicely-preserved original pieces. Tan carpets make it feel plush from behind the wheel, and the dash is full of original instruments plus a column-mounted tachometer and temperature gauge. There's factory A/C, a powerful AM/FM stereo system with speakers in the dash, and a woodgrained steering wheel that has an OEM look, as if it came from a Camaro or Corvette. A sliding rear window is always a great feature, creating a nice cooling effect inside without excessive wind, for those days when you don't quite need the A/C.

The engine is a 350 cubic inch V8, as advertised on the front fenders, but dressed up like it was heading out to the show field. From the chrome air cleaner and valve covers to the Edelbrock Performer intake and 4-barrel carburetor, it's dressed like a muscle car, but not so exotic as to be fussy. Correct Chevy Orange paint on the engine itself gives it a factory look and the engine really pops in the extremely sanitary engine bay. Power steering and brakes are included, and the ignition system was converted to HEI for reliability and improved efficiency. Backed by a TH350 3-speed automatic transmission and sturdy 12-bolt rear end, it's still ready and willing to work if you're able to risk damaging that immaculate bed. The chassis is not detailed for show, but does offer a lowered stance that looks exactly right. Long-tube headers dump into a pair of Flowmasters with subtle polished tips just behind the rear wheels. Period-perfect Torque Thrust wheels look right and totally stuff the wheelwells with fat 235/70/15 BFGoodrich T/A radials.

All the time and money has already been spent, now all that remains is some quality cruising time. Call today! 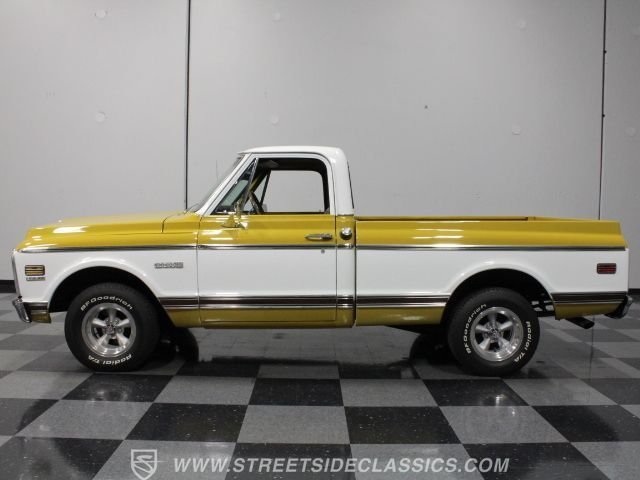