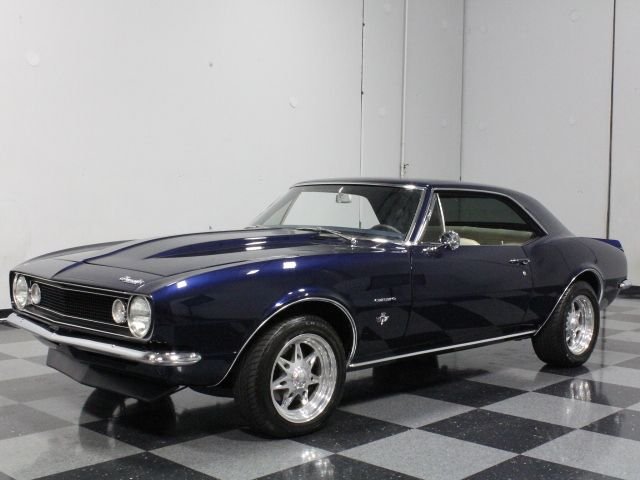 OVER $100K IN THIS BUILD, 5k MILES SINCE SHOW-STOPPING FRAME-OFF RESTORATION!

This 1967 Camaro is one of those cars where you can see the money before you even get close. With a show-stopping paint job, a gorgeous stock-style interior, and lots of muscle, this pro-built cruiser looks like every bit of the $100,000 build cost was money well spent.

You can always spot the great ones because they seem to glow compared to the cars around them. We can't say specifically what sets them apart, but cars like this that have been taken down to bare metal and rebuilt from there on up seem to just stand out, as if everything were just a little more exacting, the finish is just a little deeper, the chrome a little bit shinier. At any rate, the spectacular midnight blue paint on this car is simply stunning; sometimes black, sometimes blue, and especially attractive when the light highlights the metallic in the finish. A simple cowl-induction hood and a pair of factory-style spoilers fore and aft retain the traditional Camaro look and they didn't seem to want to hide any of that gorgeous paint under stripes, and that's the right choice. They also kept the non-SS grille and factory-issue badges and emblems, so it's not trying to be something it's not, merely the very best example of what it is. The bumpers and much of the stainless trim is new, so that stuff sparkles, including the Bowtie mirrors and tw0element taillights.

The bucket seat interior looks pretty stock at first glance, offering bright white buckets and factory door panels for a classic look that nobody will ever complain about. Dark blue carpets and a matching dash pad tie in with the bodywork, and there's a custom center console with an armrest that updates the interior a bit. The original dials are gone, replaced by a trick insert that looks almost OEM and uses Auto Meter Phantom gauges for a high-tech look that's pretty slick. There's a modern air-conditioning system in place that uses the dash's original eyeball vents and controls, but the factory radio is gone, replaced by an AM/FM/CD head unit and speakers creatively stashed throughout the interior. Again, the interior is the kind of place that looks pretty stock at first glance, but somehow it's a lot nicer than other Camaros like it, and it's the detailing that makes this one shine. Even the trunk features its own custom carpet set rather than a reproduction vinyl mat.

They didn't mess around when it came time for horsepower, either. That's a 330 horsepower 350 cubic inch crate motor dressed for show and ready to rock. Tasteful use of chrome and aluminum gives it some flash, but the overall vibe, like the rest of the car, is OEM with a show-quality twist. A big aluminum radiator, GM aluminum intake, Holley carburetor, and long-tube headers all make it mechanically sound and a ton of fun to drive. Underneath, the subframes were powdercoated, the suspension was rebuilt, and the 4-speed feeds a rugged 12-bolt rear end with a 3.31 Posi gearset inside, so it's up for whatever fun you want to have. Flowmaster mufflers give it that awesome sound you like and virtually everything under the car is brand new. See what I mean about a $100,000 bill to build this car? Even the attractive Budnik wheels are ideally suited to the car and wear 205/55/16 front and 255/50/16 rear tires that are just the right size.

The receipts are included, but you can tell from the pictures that this was a high-dollar build. Incredibly clean and slick, this Camaro stands out in a very crowded field. Call today! 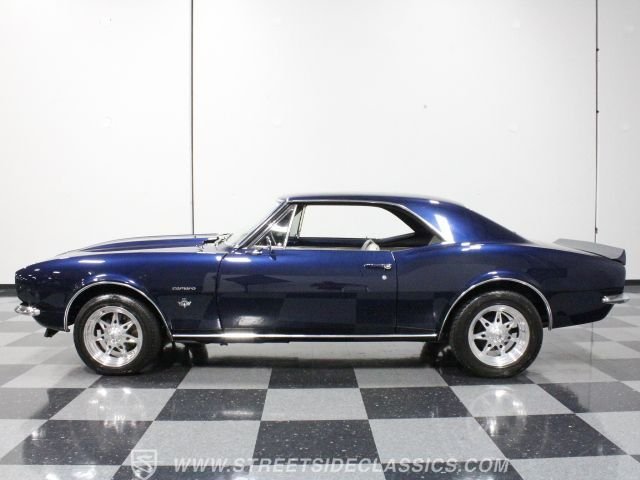