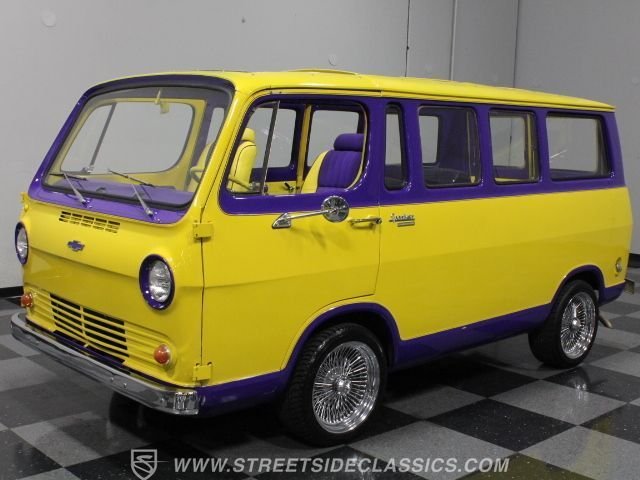 This funky bus is ready to party, and if you can't have fun with a 1966 Chevy G10 van dressed in yellow and purple at your next tailgate party, you're doing it wrong. Obviously designed to be a rolling entertainment complex, this unusual but surprisingly well-built van makes a bold statement and will unquestionably be the life of the party.

OK, so the paint isn't to everyone's taste, but I guarantee if you show up in this thing, the party will be wherever you want it. You aren't going to drive it every day, you aren't taking your mom to dinner in it, so it's not really fair to compare it to a garden-variety minivan or something. The unusual G10 bodywork is a little bigger than the Corvair-based vans and uses a more conventional driveline, but you'll still get a bunch of questions about it every time you stop. The cab-forward design is totally a product of the '60s and is the model of packaging efficiency. It also looks cool and was probably the original model for the Mystery Machine. The bright paint job has seen its share of late-night events so it's not perfect, but it definitely puts everyone in a good mood when it's around and even though it's bright, it's well done enough that most folks think it's pretty cool. The trim is in good shape, particularly the chrome bumpers, and all that flat glass has survived the decades without issues.

Pull open any of the doors and you've got room to spare in the cavernous interior. The front seat area is fitted with two-tone yellow and purple buckets flanking a custom engine cover that's got Plexiglas windows to the engine bay below. The carpets are color-matched to the body and even the steering wheel has a custom yellow leather wrap. Factory gauges, 3-on-the-tree shifting, and basic amenities were par for the course in 1966, but there's a state-of-the-art entertainment system in the dash. That system features a pop-up touch screen that powers speakers throughout the interior, particularly in back where there's plenty of room to hang out. A big purple chair pulls out to provide on-the-spot chillin' and with two giant subwoofers and a bunch of amplifiers, it'll fill a parking lot with sound. Oh, and there's a fabric roof insert that opens it up to the sky if you're feeling particularly festive.

Chevy's familiar stovebolt six provides power and while performance is modest, it's reliable and smooth and doesn't seem to mind hanging around with all your friends. It's nicely dressed thanks to being so visible there amidships under the transparent engine cover, and service access is remarkably easy. It starts quickly and runs well, with the 3-speed manual transmission finding the gears without a lot of effort. It's pretty clean underneath with the usual rigid axles at both ends, so you really don't have to worry about breaking it. A single exhaust system has a nice 6-cylinder grumble, and there are drum brakes at all four corners, although with the engine's modest performance, they're more than adequate. Those 17-inch chrome wire wheels were surely expensive and now carry 225/45/17 Kumho radials.

You've got to be pretty cool to show up in a ride like this, but if you can pull it off, everybody's going to want to party with you. Call today! 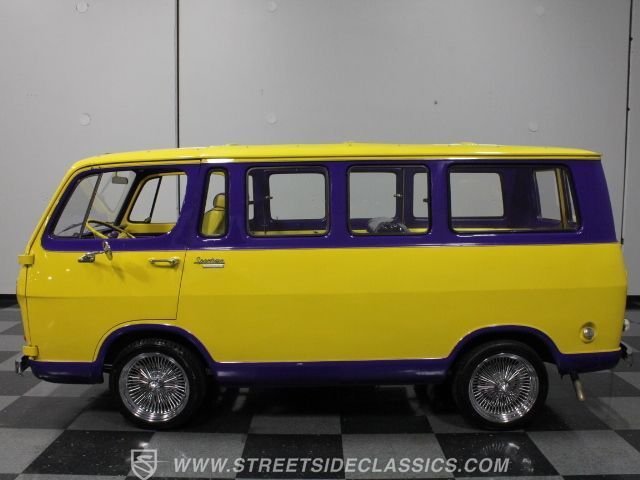