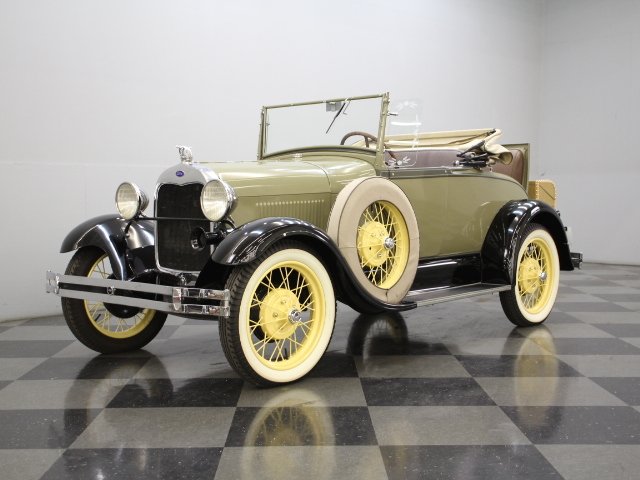 Think about what a big deal the Model A was when it hit the streets in 1928. With the look of a baby Lincoln, modern 4-wheel brakes, and lively performance, it was everything the Model T was not, and every bit as durable. Today, cars like this 1928 Model A roadster are fantastic collectables whether you're just starting out or have a massive collection already.

The unusual colors on this A are correct and are called Chicle and Copra Drab, and yes, they're pretty close to Army camouflage colors. But on the stylish little roadster bodywork, they look fantastic and they'll help this one stand out at shows, where so many of them will be blue or dark green. Fit and finish are extremely good, and it's quite likely that no Model A was this nice coming out of Dearborn in 1928. Note that as an open car, there are no exterior door handles, a sure-fire way to identify an early 1928 model, and the painted windshield frame identifies it as a standard roadster. However, it also carries twin sidemounts, which were optional, and a rear-mounted trunk that makes it quite practical as a tour car. Other upgrades include chrome instead of nickel on the radiator shell and headlight buckets, etched windwings, and canvas covers for the sidemounts.

The interior is correctly restored in brown leatherette, which was Ford's version of weatherproof vinyl. The Model A is simplicity itself with no unnecessary components, but somehow they managed to make it stylish as well as functional. The interior is cozy for two, offering plain door panels and a simple dashboard that's also the outside of the cowl-mounted fuel tank. The instrument panel offers only the basics, and the windshield wiper is a hand-crank affair that's probably only adequate, but what else do you expect on a car without any windows? A reproduction rubber mat covers the wooden floorboards, and the beautiful brown steering wheel isn't entirely correct but nobody can argue that it doesn't look great. The tan canvas top folds easily giving the roadster a sporty look, and two can squeeze into the rumble seat out back, which is finished in matching brown leatherette.

The torquey little four cylinder engine is simply a delightful machine. Reliable and tough, it over-performs given its modest specifications, happy to trundle around town with a minimum of shifting thanks to its prodigious torque output and yet still capable of running all day at 45-50 MPH. The engine bay appears to be quite original, but given the reliability of these cars and the vast network of parts suppliers out there, it shouldn't be a surprise-these little guys will run basically forever with a minimum of maintenance. It still has its original Powerhouse generator, updraft carburetor (now with added air filtration!), and an unusual period accessory exhaust manifold heater. The 3-speed manual requires double-clutching, but it's easy to master and the suspension and brakes make it fun. Correct 21-inch welded wire wheels wear reproduction 4.40/4.50-21 whitewalls that really dress up the little roadster.

The charm is undeniable, both in looks and on-road performance. If you're a car guy, you owe it to yourself to own an original Model A at least once in your life. Call today! 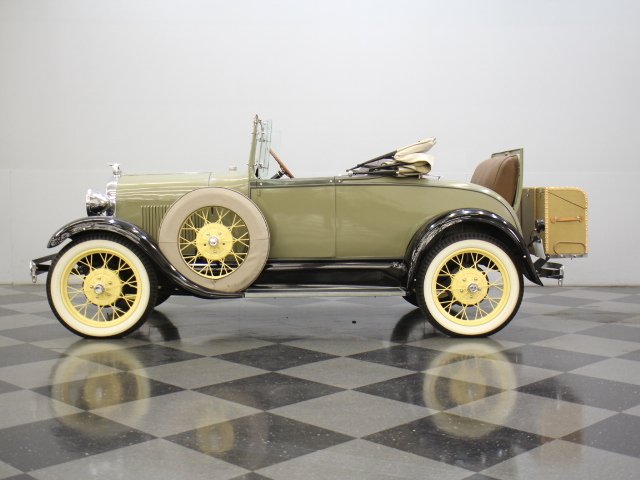