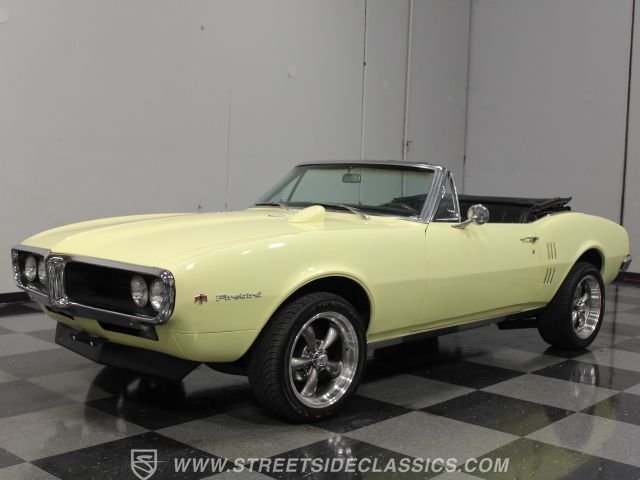 This clean 1967 Pontiac Firebird convertible looks subtle but packs a 400 cubic inch punch under its pointed hood. Even better, there's a modern 5-speed behind it, turning this lovely convertible into a cross-country cruiser that's just effortless on the highway. Add in a handsome interior and a top that goes down, and you have a great choice for warm weather fun.

That's pretty close to the correct code Y Mayfair Maize on the body, surely the same stuff they were putting on Corvettes and calling Sunfire Yellow, and it looks just as good here. It was done not too long ago to a decent standard, giving the car a clean, crisp look that definitely has an appeal. Good bodywork underneath surely helps, and the crease that runs from nose to tail is crisply defined and the gills in the quarter panels are a cool contrast that helps break up the otherwise smooth body. Gaps are good, which can be a challenge on a ragtop, and it's thankfully devoid of stripes or add-on spoilers that would spoil the effect. Instead, this car isn't trying too hard and simply lets the hardware to the talking. There's nice chrome, too, including the pointed front bumper/grille assembly and the Firebird emblems are crisply rendered. Sure, there's plenty of F-body DNA there, but the Firebird has a very distinct flavor that's different from the Camaro.

The black bucket seat interior is also nicely restored with reproduction seat covers front and rear, newer black carpets, and a no-nonsense look. The woodgrained steering wheel is a little thicker and a little smaller in diameter than the original and it's parked on top of a tilt column that actually makes a big difference in comfort. The big Hurst shifter with cue ball knob is linked to a 5-speed manual gearbox, which not only makes it a lot of fun to drive but improves highway mileage with a deep overdrive gear on top. Factory gauges are in good condition with an optimistic 160 MPH speedometer as standard equipment, and that hood-mounted tach is about the coolest factory gauge ever. A factory AM radio is still in the center of the stack, but it's disconnected in favor of a modern AM/FM/CD stereo head unit that's installed down on the transmission tunnel, a nice decision that preserves the original look. The black convertible top fits rather well and the trunk is finished with correct spatter paint.

A 400 cubic inch V8 makes this lightweight F-body feel insanely fast on the street. It topped the Camaro's 396 by four cubes but the bottom-end torque of the Poncho is where it really shines. Dressed with an Edelbrock intake and 4-barrel carburetor, it's got instantaneous throttle response and long-tube headers bolster an already robust torque curve. It's beautifully detailed with chrome air cleaner, alternator, and valve covers and Pontiac Turquoise paint on the block, and the satin black engine bay makes a perfect backdrop. A bit aluminum radiator doesn't seem to mind the big engine's heat and it's got power front discs and power steering to make it easy to drive. The chassis is quite clean and features subframe connectors, a 10-bolt rear end, and a recent gas tank and rolls on 17-inch Torque Thrust wheels and staggered performance radials.

Lots of fun to drive with a look that speaks softly yet carries a big stick, this Firebird more than delivers on the promises made by its look. Call today! 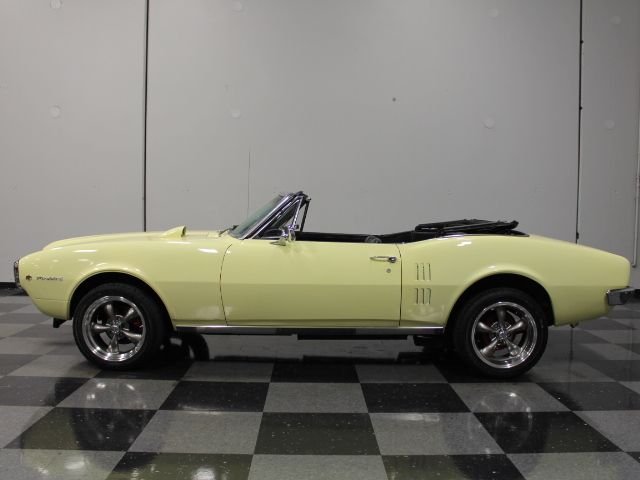