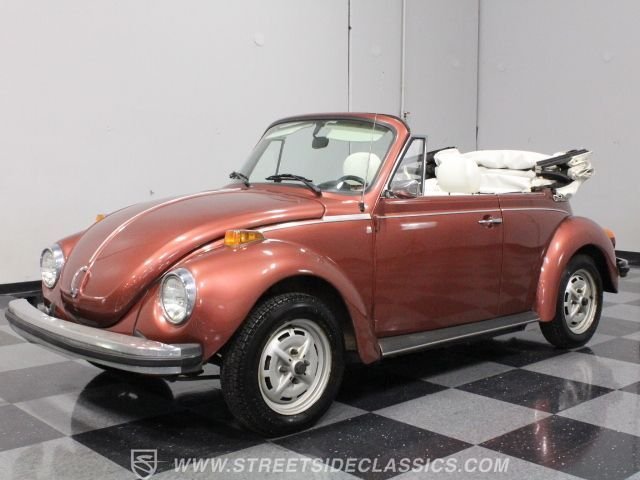 VW Beetles, they're never going to go out of fashion. They've always been a favorite of car people and non-car people and if there's a more distinctive machine on four wheels, I don't know what it would be. So when you have a chance to own a nice one like this 1978 Super Beetle convertible, you should probably take it, simply because it's still a lot of fun for not a lot of money and a painless way to get into an old car.

This one-owner ragtop was restored as needed over the course of its life, and like many such cars, the need for a comprehensive rebuilt at the molecular level was never really required. As a result, it's got a solid feeling that only comes from cars that haven't been fully disassembled and a classic look that's a little bit funky to suit the Beetle's personality. The medium red metallic paint might have been on the color pallet in 1978, but rendered in modern materials, it positively glows. It's not pink, it's not magenta, it's not bronze, but rather somewhere in-between that certainly makes it stand out, and on a Beetle, nothing looks bad. The trim is probably original and in decent shape, with a little tarnishing of the chrome that would probably buff right up with an afternoon of attention, and the Super Beetle upgrades, including shiny side moldings, gives it a detailed look. Aside from pickup trucks, the Beetle might be the last car to actually use running boards, and they're in good condition with nice rubber and a slice of bright trim to set them off.

The white interior was installed at the same time the body was painted, sometime in the late 1990s. Given that the car had already earned collector status by then, it hasn't been driven much and everything still looks bright and crisp inside. The seats are comfortable vinyl that use the original patterns and show only minimal use, resulting in an inviting patina that looks comfortable but not worn. Black carpets keep it from being too bright inside, and a Champagne Edition-only woodgrained dash adds warmth. The gauges are fully operational and there's a newer AM/FM/CD stereo in the dash with the original Blaupunkt included with the sale. The white top was new at that time, too, and fits well, folds easily, and doesn't show any major signs of age. Obviously someone loved this Bug.

Remarkably, the original fuel-injected engine is still providing power. This is in contrast to most of the other Beetles of this vintage that have been retrofitted with carburetors, a strange step backwards. It starts easily and runs quite well, and thanks to that fuel injection system, it doesn't have any fussiness when it first starts or on hot days. The engine bay is pretty packed, but the equipment is correct and shows only regular maintenance throughout the past 36 years. The 4-speed manual transmission is typical Beetle, but once you figure it out it's easy and fun. The floor pans were replaced in 2003, so no need to worry about that (it's pretty much a non-issue in VW circles) and the exhaust system is recent and delivers a proper VW sound. Factory steel wheels carry newer 155/80/15 BFGoodrich radials which seem tailor-made for this application.

Good VW Beetle convertibles seem to have settled in the mid-teens price range, and Champagne Edition's are in the twenties, assuming you can find one. So you can buy today and enjoy with confidence that it'll always be worth about what you have in it at this bargain price. Not many other vehicles can make that claim. Call today! 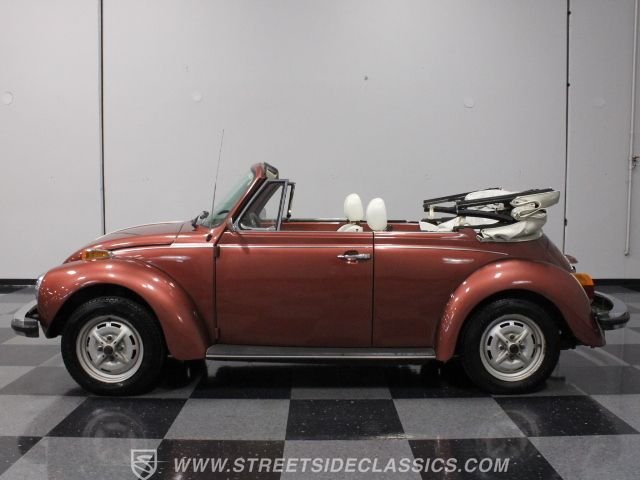