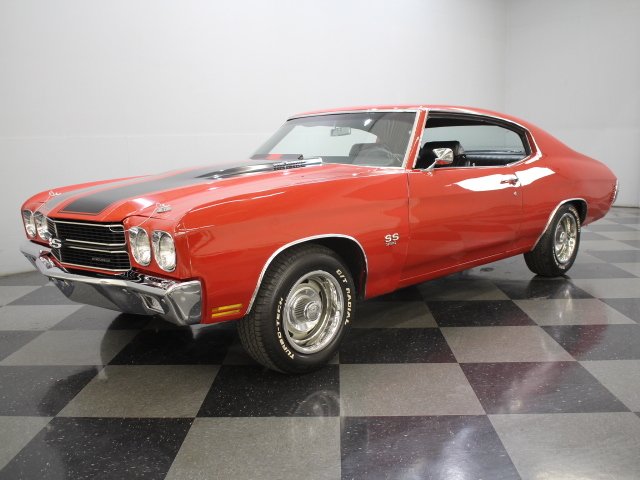 1970 was a banner year for Chevelles, with no fewer than five big block engine options, two SS packages, and a long, long list of options. This cool 1970 SS 396 carries a 396 cubic inch big block that delivers the performance that made these cars legendary, as well as a look that still turns heads today.

Finished in code 75 Cranberry Red, there are few other predators on the road as potent as the 1970 Chevelle. The black SS stripes and cowl-induction hood certainly help reinforce that image, and when you're going to attract this much attention, it's always smart to do it right. Fortunately, this car was rebuilt from the ground up, and today it is straight, solid, and shiny. Workmanship is quite good throughout, with good gaps, and a great finish on the two-stage urethane that will stand out anywhere you go. It carries all the correct SS gear, including the blacked-out front grille, SS bumper insert, and badges on the front fenders. In a sea of LS6 clones, it's refreshing to see an SS still spec'd out the way the factory intended.

The Chevelle's interior counts as one of the triumphs of 1970s General Motors design. The bucket seats have been reupholstered using authentic seat covers in the original patterns, and the back seat has been restored to match. Fresh black carpets are the right pile and weave, and the door panels are proper SS pieces. That's the original dash, full of factory-issued round gauges, further proof that this is a real SS, although it's interesting to note that even on SS models, the instruments covered only the basics. The horseshoe shifter is one of GM's coolest designs and sharp-eyed viewers will note that it now shows four gears instead of three (more on that in a moment). This SS also carries its original AM radio, a real rarity these days but you have to appreciate the owner's preferences-who wouldn't rather listen to the big block sing? The beautifully finished trunk wears a fresh mat and carries a matching full-sized Rally wheel and tire assembly.

Engine choices were confusing in 1970, and the L34 was actually a 402, not the old familiar 396 (although it was still called the SS 396). Whatever the displacement, it still delivers that insane wallop of torque when you step on the loud pedal. When it was rebuilt, this one received upgrades like a Holley double-pumper, Edelbrock aluminum intake, and plenty of chrome dress-up. It starts easily and pulls like a freight train, with the 700R4 4-speed automatic clicking off precise upshifts without blinking at the engine's prodigious output. Other new equipment includes a fresh power brake booster and master cylinder, new hoses, a fresh alternator, and nicely preserved cast iron exhaust manifolds. The chassis features a rumbling exhaust system with correct tips and 15-inch Corvette Rally wheels wearing fat 235/60/15 white-letter radials for a perfect street-fighter look.

With a beautiful restoration, this potent Chevelle doesn't have to pretend to be anything it isn't. Call today! 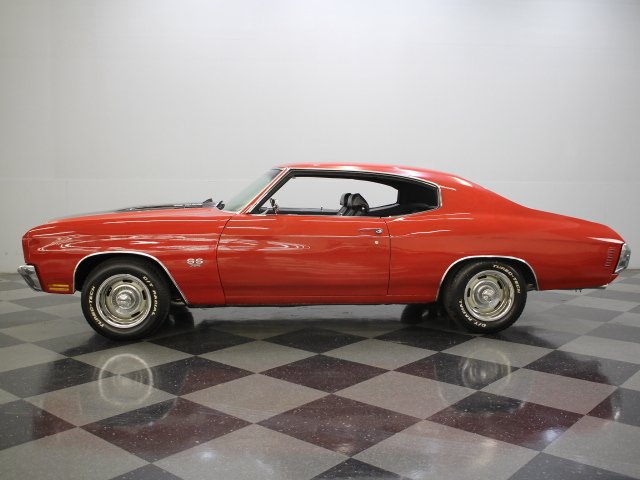