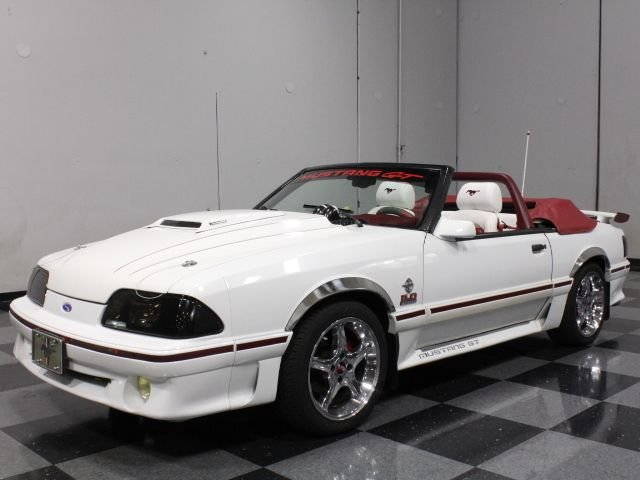 FOX BODY MUSTANGS ARE ON THE RISE, 5.0 'VERT GT, LOADS OF AFTERMARKET ADD-ONS!!

The Fox-body Mustang 5.0 is perhaps the most modification-friendly car ever created, and if having a loaded car where too much is just enough, then perhaps this 1987 Mustang GT convertible is your kind of insanity. The list of aftermarket upgrades would easily take up the entirety of this space, so I'm just going to hit the highlights and tell you that you've never seen anything like this before.

OK, I know it's a little overkill, but underneath the flash there's a really nice Mustang GT ragtop. The bodywork is in excellent shape, the white paint shines up quite well, and the urethane ground effects, which are factory-issue, are in great shape, unlike so many of this car's siblings. It doesn't look like it's been wrecked or abused, and obviously, with this kind of investment, someone really loved this car. The most noteworthy upgrades are the custom hood with scoop and the big wing out back, both of which actually give the Mustang a lower, more powerful look. A few extra badges here and there never hurt anyone and that aluminum wing is still an improvement over the factory's goofy luggage rack, designed to hide the CHMSL. And you know, if the details aren't your thing, most of them are removable, including the head and taillight covers, the shiny fender guards, and the admittedly pretty trick aluminum fuel door.

There's a ton of money tied up in the interior, starting with the custom red and white upholstery on top of the original sport seats. Embroidered pony logos recall Mustangs of the past and the workmanship on the fresh threads is pretty impressive. The original door panels have been freshened and look great, and red carpets have been installed to match. There are no fewer than ten auxiliary gauges in addition to the factory instrument panel, but they monitor important stuff because the car has a nitrous kit in the trunk, so you can't take any chances. It's also loaded, including power windows and locks, A/C, cruise control, and a tilt wheel, which would disappear as soon as airbags arrived on the Mustang. There's also an upgraded stereo system with speakers and other equipment in the trunk. A newer red canvas convertible top stows as easily as the original vinyl piece and fits under a red boot.

Mechanically, this Mustang has been given a pretty thorough makeover. The potent 5.0 runs beautifully and pulls hard thanks to a Cobra intake manifold and cold air intake. There's also an MSD ignition system that helps manage the nitrous shot plumbed into the intake system. Almost everything under the hood has been painted, polished, powdercoated, or replaced, giving it a highly detailed look that suggests someone was making a statement. But it's also been properly reinforced with a strut tower brace and a set of subframe connectors underneath, so it feels stout. Speaking of upgrades underneath, there's a Flowmaster exhaust system with X-pipe that sounds gnarly and four-wheel disc brakes remedy the Fox platform's biggest Achilles' heel. The AOD 4-speed automatic overdrive transmission is unobtrusive and doesn't seem to mind the added horsepower and the original 8.8-inch rear end hangs out back on a set of lowering springs and custom heavy-duty control arms. Flashy Cobra R replica wheels are fitted and carry 17-inch performance rubber at all four corners.

Overkill or a well-engineered car that has a vast list of expensive aftermarket parts that you can keep or remove. We know it's not for everyone, but if you can see what this Mustang has to offer, you'll agree that it's a ton of fun for not a lot of cash. Call today! 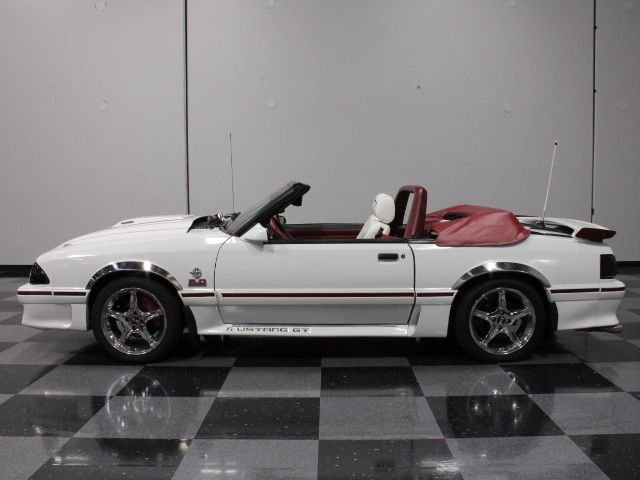