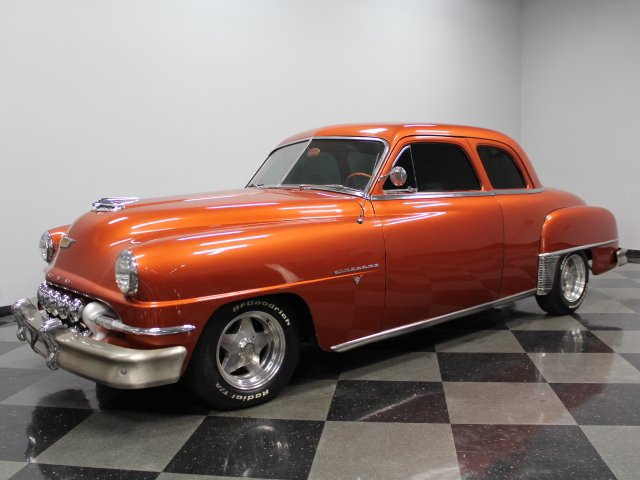 That thing got a Hemi? Well, yes, it does. The Hemi came to the Desoto in 1952, and cars like this cool 1952 Desoto Firedome coupe can rightly be called the ancestors of the modern muscle car. Lightly customized, this cool Mopar neatly straddles the line between restored and modified in a way that should make everyone happy.

OK, so the bright copper paint probably isn't what it wore in 1952, but it's hard to argue that it doesn't look awesome. The Firedome offers a trim coupe profile with a long hood/short deck configuration and a forward-canted greenhouse to give it the illusion of great speed. During the build, the door handles were shaved, but most of the trim remains and was installed on top of some very straight sheetmetal. The doors fit neatly, the hood closes easily, and the rounded trunk has an aggressive curve that looks cool all by itself. At first glance, you might think the bumpers are weathered, but look closely-they have been intentionally painted, along with the taillight bezels and the outer teeth of the grille, the remainder of which have been brilliantly chromed. The effect is pretty cool, and you'll never get tired of watching people do a double-take when they see it.

The interior keeps to the stock recipe as well. The upholstery isn't totally original, but it looks convincing wrapped around the original bench seats and door panels, and offers a subtle contrast to the tan paint on the dash. The original instrument panel has been painted to match the body and the factory gauges were rebuilt, not replaced with some aftermarket pieces. After all, what could be cooler than those vintage pointers and chrome numbers? It also retains the original steering wheel (color-matched, of course), column-mounted shifter and horn ring, which give it a light custom look. The original AM radio even remains in the dash! There's also a spacious trunk out back that is upholstered in the usual gray fabric for durability, and it includes a full-sized spare tire and hubcap.

The Hemi was new to the Desoto lineup in 1952. Displacing 276 cubic inches and making 160 horsepower, it was a potent performer that easily lent itself to ever greater amounts of horsepower. While the rest of this car has some tasteful modifications, the engine bay is completely stock and beautifully restored, right down to the bright red valve covers. There's still a 2-barrel carburetor and oil bath air cleaner up top, a generator still makes the electricity, and the heater is still mounted on the firewall. Underneath, it still offers a single exhaust system with a modest muffler that gives a hushed V8 soundtrack, and shifts come courtesy of Desoto's Fluid Drive transmission with 'Tip-Toe' shift. The clutch is only used to switch from neutral, drive, or reverse, shifting is handled like an automatic. Have a look at the spotless floors, rebuilt suspension, and new gas tank and you'll know someone cared about making this one right. The American Racing aluminum wheels give it a modern look and wear 215/70/15 BFGoodrich radials to great effect.

A neat car with a legendary performance image behind it. The custom tricks will get people to look, but it's the detailing that will truly win them over. Call today! 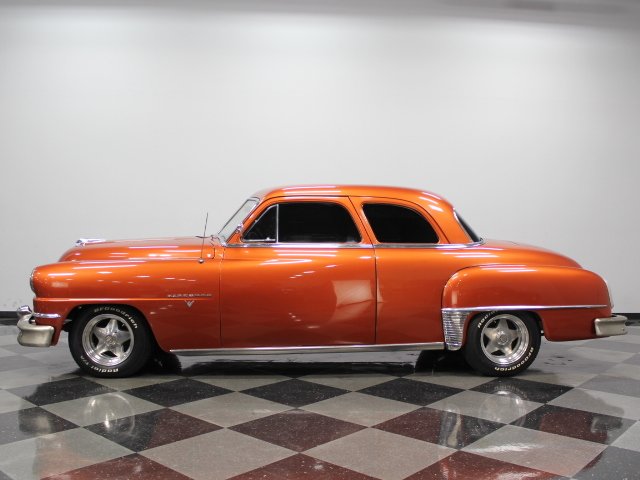