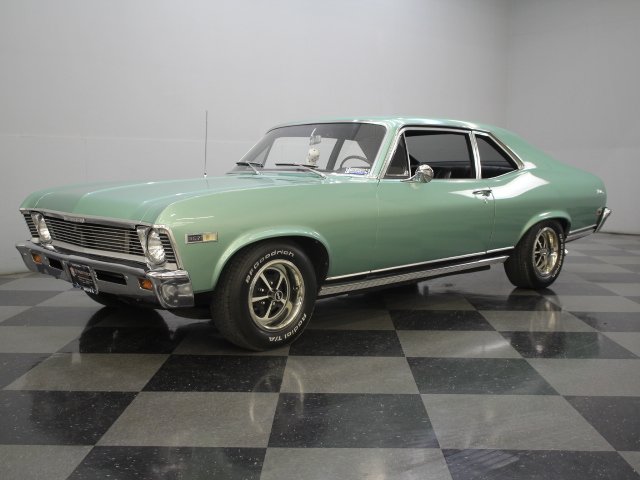 This unusual 1968 Chevy Nova offers something you don't see often in Chevys from the muscle car era: subtlety. Neatly finished in original Grecian Green, it looks frosty and smooth, and with its numbers-matching V8 under the hood, perhaps someone wanted a car that was a lot of fun but stayed under the radar.

A southern car all its life, it didn't take a lot of work to make it straight, although you can tell it's a lot nicer than the factory workmanship. Good gaps all around indicate that someone knew what they were doing and cared enough to spend a lot of time getting it all lined up just right, and the doors open and close with precision. Look how clean the flanks are, which are definitely signs of clean living. It hasn't been dressed up like a fake SS, so the original grille remains (complete with Chevy II markings, which were 1968-only) and the 307 badges on the front fenders are legit. Sure, it could easily be the foundation of something special, but it's also quite unique that it has survived mostly intact and original without being turned into the same car everybody else already built. Chrome items like the bumpers are beautifully done and all the stainless trim remains in excellent shape with just the right shine.

Inside, you'll find a cool stock-type bucket seat interior, which is somewhat of a rarity with Novas, particularly non-SS variants, and according to the cowl tag, it's correct for this car. There's also a center console, which is quite rare, and an under-dash A/C unit that is about what you would have received from the aftermarket in 1968. The original dash pad is in excellent shape and shades the factory instruments whose markings are so clear that it's easy to assume they've been restored. A newer AM/FM/cassette stereo with trunk-mounted CD changer is the lone item that isn't 1968-authentic, but it sounds great. Like the body, the interior workmanship is nicely done and although the Nova was designed to be inexpensive, it doesn't feel that way from behind the wheel. The trunk is rust-free and includes a full-sized spare and jack.

Under the hood, you'll find the original 307 cubic inch V8. Chevy Orange is the theme, but it looks highly original and unmolested, leaving onlookers to wonder about its history simply because it's so clean. The open element air cleaner wears a 307 Turbo-Fire decal to add a little visual sizzle, and a chrome alternator was added at some point, but the overall honesty of the car still shows through. This car might also be one of the last GM products to use the venerable PowerGlide automatic, but its bulletproof nature ensures that you'll never have to worry. The undercarriage is shockingly clean with only a set of Flowmasters deviating from a purely stock build. Handsome SS wheels look great and now wear 205/70/14 front and 235/60/14 rear BFGoodrich T/A radials.

Always popular with Chevy fans, this Nova is a great-looking, practical, and surprisingly quick car that will make you smile every time you turn the key. Call today! 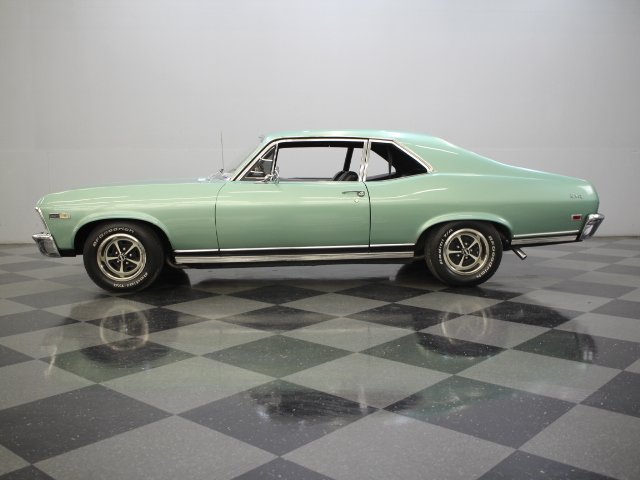