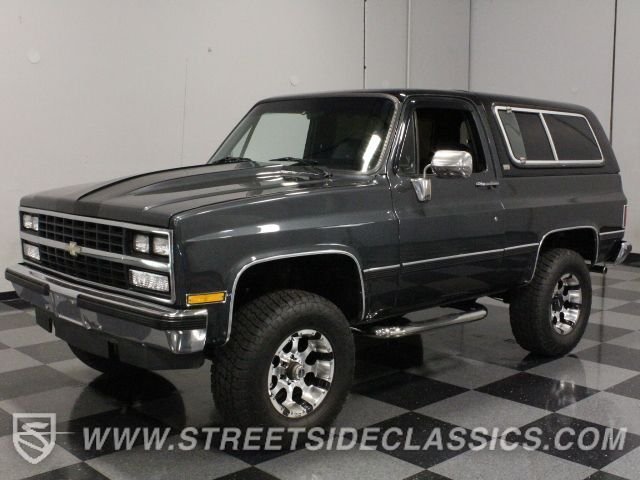 Full-sized 2-door SUVs are gone from the market unless you count the Jeep Wrangler, and that's really a shame. This 1989 Chevrolet Blazer is practical and spacious, yet ideally sized to head out on the trails without feeling clumsy. You won't find another one this nicely finished, either, with an extensive list of new and rebuilt components that make it feel almost new.

The big wheels are a bit of a giveaway, but the dark charcoal gray paint looks subtle and elegant on the big Chevy's squared-off bodywork. Given the capabilities of these trucks, it wouldn't be surprising if this one lived most of its life off-road, but instead it appears that it was just a daily driver that never really saw any action. As a result, it's impressively clean and straight and with a recent repaint and a cowl-induction hood, it looks far younger than it is. The repaint is fairly recent and has an awesome shine thanks to two-stage urethane paint and the contrasting black top and door jambs draw your attention to the Chevy's removable fiberglass roof. Factory trim and chrome appears to be original and in good condition for its age, and shiny chrome tubular steps were added on both sides to make climbing aboard a little easier.

Black hi-back buckets make the Blazer feel like a tall Camaro inside and with new carpets and seat covers in the original pleated patterns it has a very fresh look. The door panels and center console are probably original and in good condition, and the leather-wrapped steering wheel is a nice touch that gives the big Blazer a bit of an upscale feel. The AM/FM/CD/iPod stereo was installed in 2013 and it is loaded with factory options including power windows and locks, power tailgate window, cruise control, a tilt column, and ice cold A/C that's been converted to R134a. Wrapped in a brushed aluminum dashboard, the factory gauges are bright and clear and with a column-shifted automatic transmission and floor-mounted 2-speed transfer case, everything is at your fingertips. The benefit of a full-sized SUV like this is cargo space, and the nicely finished rear area includes a durable rubber mat and a full-sized spare, plus enough room for a studio apartment's worth of furniture.

Chevy's venerable 350 cubic inch V8 gives the big yet surprisingly nimble Blazer genuine enthusiasm out on the road and plenty of torque to climb through the rough stuff. The engine bay is so tidy and clean that it would be hard to imagine this truck slogging through the mud at any point in its history and there's almost nothing that deviates from stock specs beyond the open-element air cleaner and retro decal on its chrome face. The list of new components on this truck is extensive, including the modest lift kit with shocks, the brake system, and the dual exhaust system with chrome tips exiting just behind the rear wheels. A 700R4 4-speed automatic overdrive transmission actually makes it a very comfortable and reasonably economical highway cruiser, especially with those giant tires. Flashy Moto Metal wheels definitely make a statement and carry 295/70/17 off-road radials that are sensibly sized to look cool and remain functional in the dirt.

The big Blazers have a special spot in off-roaders' hearts and this no-excuses 1989 example is almost too nice to go out tearing up the countryside, but given the equipment and quality, it's more than capable of doing just that. Call today! 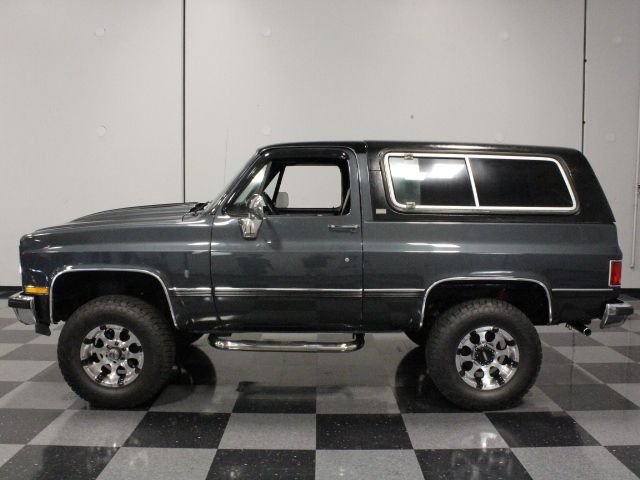