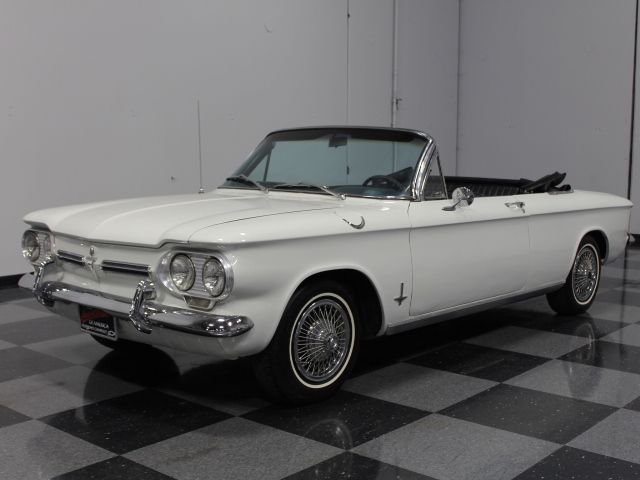 Who says there are no more affordable collector cars that you'd actually want? No, you don't have to settle for a 1973 Maverick with a rod knock, you can get this neat little 1962 Chevrolet Corvair Monza convertible, which comes complete with a manual gearbox and an energetic attitude that makes it a lot of fun to drive.

There's been nothing else like the Corvair before or since, unless you count the Porsche 911, which is some pretty heady company. Now, we're not saying the Corvair is a 911 alternative, but we are saying that if you're a fan of the unusual, the funky, and the off-beat, the Corvair should appeal to you. And even if you're a bit more mainstream, the Corvair is now an icon, and like when it was new, it offers style, practicality, and economy in equal measure. The Ermine White finish looks great on the trim convertible bodywork and it has a great 1960s look that remains appealing today. We don't know when it was restored, but it was clearly freshened at some point and today presents as a nice driver-grade car. There's no shame in that, and the current owner used it as daily transportation, which should also tell you a lot about its reliability. Cars up north tended to rust in the most demonic ways possible, but this one, with its good southern roots, looks to be in good order with decent panel alignment, shiny chrome trim, and a classic look that gets attention all out of proportion to its affordable sticker price.

The stylish black interior was likewise restored at some point, and today shows a nice bit of patina that makes you want to jump in and go without a second thought. The carpets were probably replaced at the same time, since they're just too nice to be originals, particularly in a convertible, and the dash pad is in great shape. There are a few flashes of bright trim on the door panels and dash, offering a very 1960s look that fits the car perfectly. An AM/FM/cassette stereo head unit has been retrofitted into the dash and there's a CB unit underneath, giving you some idea of when this car's heyday really was. The rear-mounted engine makes for nice flat floors that gives the interior plenty of room for everyone and the forward-mounted trunk actually offers a great deal of space for your gear. It's also got a very nice-fitting black power convertible top that makes open-air motoring only seconds away; just imagine leaving work on a summer afternoon and having this waiting for you in the parking lot!

The 145 cubic inch flat-six engine has a unique sound and manages to move the sporty little convertible without seeming to work very hard. It's tucked in there low under the spare tire (which is brand new, by the way) and runs great. These were reliable cars when they were new, and thanks to proper care, this one seems ready to go any time. There's not much to look at, but the winding fan belt and original generator are interesting to look at and with a 4-speed, performance is entertaining. It also comes with a fully independent suspension, so handling is good for the era as long as you're familiar with its quirks. The underside is in good shape, which is as critical here as on any car, and it's affordable to maintain with modest 185/80/13 whitewall radials on original wheels with wire wheel covers.

Nobody will guess how affordable this neat ragtop really is when you're driving down the road and nothing sold in showrooms today can match its vintage style. Call today! 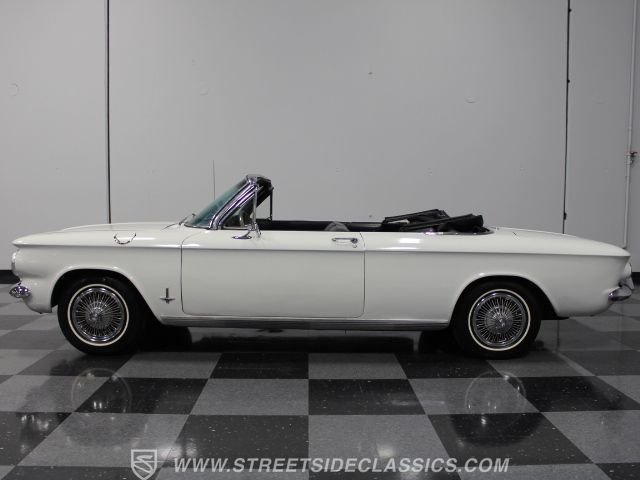