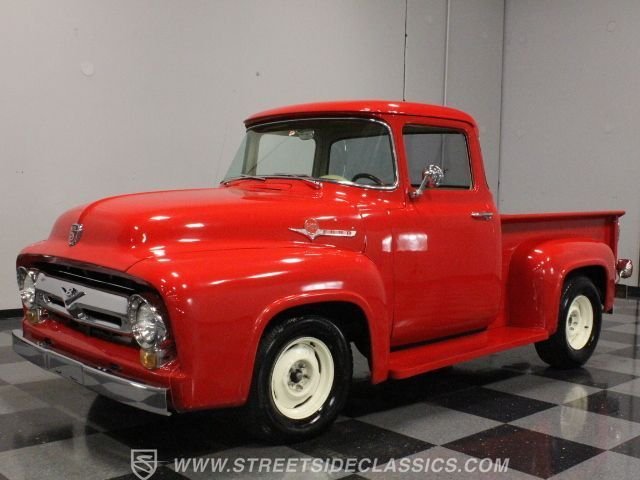 Old trucks are a great way to get into the hobby without a big cash outlay, and as this 1956 Ford F-100 proves, you can get a ton of hardware for your money. It's 100% Ford, which is always nice, and offers a few upgrades to make it the kind of truck you can take to a show or on a cross country trip without a second thought.

Bright red Ford pickups are a staple of Americana as much as gas pumps, corn fields, and baseball caps, and the mid-50s Fords are among the most attractive working machines of the period. This one's working days are well behind it, although it's not so perfect that a trip to Home Depot now and then is out of the question. There's good workmanship here, with straight panels, good alignment, and a decent gloss to the paint, but I don't think the goal was the world's most perfect Ford pickup, but rather a pleasingly clean and attractive truck that could be shown with pride just about anywhere, and in that regard it's a smashing success. The doors close with ease, the hood fits quite well, and like I said, shining up that paint on a Saturday afternoon will be a genuine pleasure. There's a bit of chrome to make it look less commercial-grade, including simple bumpers and that distinctive Ford grille, plus the cool emblems on the hood sides. The bed is painted to match and covered with a tough rubber mat, so a little bit of work won't hurt anything.

The interior, however, is a whole different story. Beautifully restored with tan upholstery, no pickup in the 1950s was this luxurious. That might be the original bench seat in there, but it's covered with a beautifully made cover that looks and feels much more upscale than the original vinyl stuff did. Full carpets help control noise and heat, adding another layer of plushness that wasn't there in 1956. A tilt column with a woodgrained steering wheel eliminates the "trucky" driving position and a custom dash houses all-new VDO gauges. Air conditioning has been neatly stashed under the dash so it stays out of sight but remains quite effective, and there's an AM/FM/CD stereo in the center so long trips aren't boring in the least. Seat belts, cruise control, and tinted windows are other amenities that suggest this one was built to drive.

Driving is easy with the 351 cubic inch "Cleveland" V8 under the hood. Using as many OEM components as possible, it's torquey and tough, moving the pickup as easily as a Mustang. A 4-barrel carburetor gives it awesome throttle response, and the truck has been upgraded with power steering and front disc brakes for safety in traffic. A big aluminum radiator with electric fans manage the temperatures under almost any conditions and the dual Flowmaster mufflers give it just the right hot rod sound. A 3-speed automatic and 9-inch rear ensure reliability, even if you are hauling stuff, and with a Mustang II type front suspension, ride and handling are vastly improved over the original rigid axle. For an old-time look, classic steel wheels are painted cream and left bare, wrapped in 225/75/15 front and 255/70/15 rear blackwall radials.

A neat old truck with lots of performance and the creature comforts to make it feel far more sophisticated. For this kind of money, this awesome Ford is one heck of a deal. Call now! 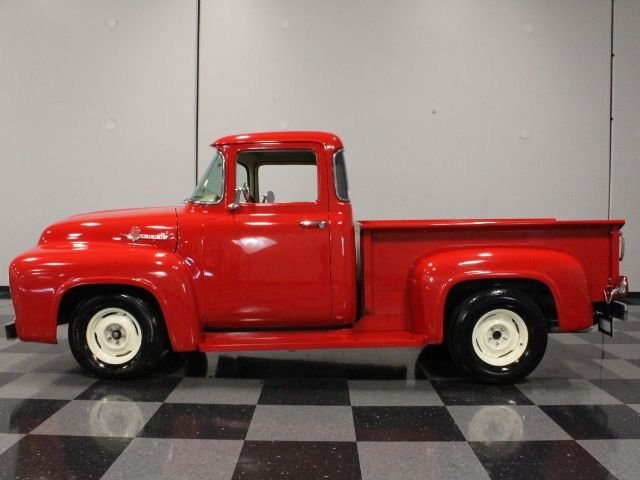