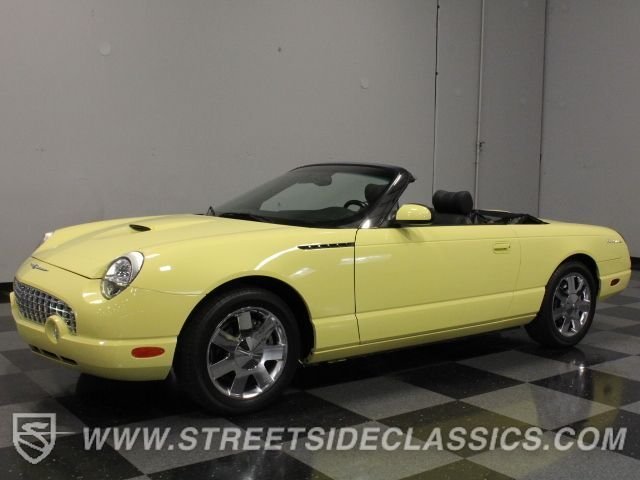 LOW MILES, CLEAN AS CAN BE, INSPIRATION YELLOW ON BLACK, FULLY LOADED, LIKE NEW!

It probably isn't surprising that you can find really clean, low-mileage Thunderbirds like this 2002 example; after all, EVERYONE knew they'd be red-hot and didn't want to miss the opportunity to own a future classic. With that in mind, perhaps now is the time to pick up this 10,545-mile original car, which will certainly always be in demand and with careful ownership, it'll remain a first-class convertible for decades to come.

The color is called Inspiration Yellow, and was the poster color for the new T-Bird when Ford debuted it. It is at once familiar and period-correct, with a distinct modern flair, encompassing all that was great about the first-generation 2-seaters. The grille, hood scoop, and taillights all echo the past without being slaves to a retro look, and since you already know that these were collectors' items the moment they hit showrooms, you also know that this particular car was never used as a daily driver. Instead it was used on sunny days and has accumulated less than 900 miles a year since it was built...wow! Fit and finish are showroom fresh, with no evidence that it has ever had anything more aggressive than a raindrop fall on it, and even then I bet it was only once or twice. Sure, if you look hard you can probably find a tiny nick or scratch on it, but if you want a fresh one, they don't come much better than this.

Ford did the same seamless blend of old and new inside, with attractive black leather buckets offering horizontal pleats and Thunderbird logos. Underneath, they're modern and supportive, and, of course, power-actuated. Everything was standard in the new T-Bird, including A/C, power windows and locks, cruise control, and a very powerful AM/FM/CD stereo system. The gauges have a modern look and the dash owes at least some of its DNA to the Lincoln LS sedan of the same time period, but the bright strip of trim recalls the original 'Bird's instrument panel. The trunk is reasonably shaped for a 2-seater and a power convertible top was standard equipment. And what Thunderbird would be complete without a removable porthole hardtop that seals it up like a modern luxury sedan. Nice!

Ford's 3.9 liter V8 engine was exactly right for the Thunderbird. Never intended to be a tire-shredding muscle car, it's a grand tourer in the finest tradition. Plenty torquey to be entertaining, but inoffensive and invisible when you're just cruising down the highway at 70 MPH. It's also smooth and makes a nice V8 burble from the twin tailpipes, so you get the flavor of the original Thunderbird without the cranky carburetor. With so few miles, you know it hasn't been abused or neglected, and the engine bay has been detailed to the same level as the bodywork. A 5-speed automatic transmission, all-independent suspension, 4-wheel disc brakes, and other modern performance-enhancements lend this 'Bird a very sporting feel without diminishing its comfort, the ideal blend that the Thunderbird has represented since 1955. Gorgeous chrome wheels remain unmarked and carry what might be the original 235/50/17 Michelin radials.

With just one owner who know collector cars, this is an A-list future classic that is ready to be enjoyed as it appreciates. Call today! 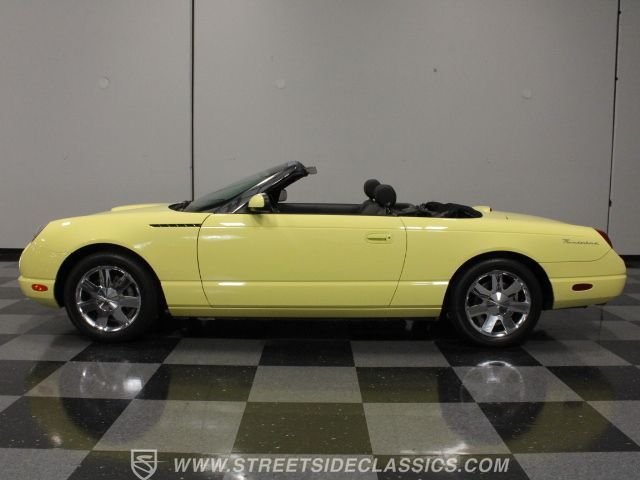