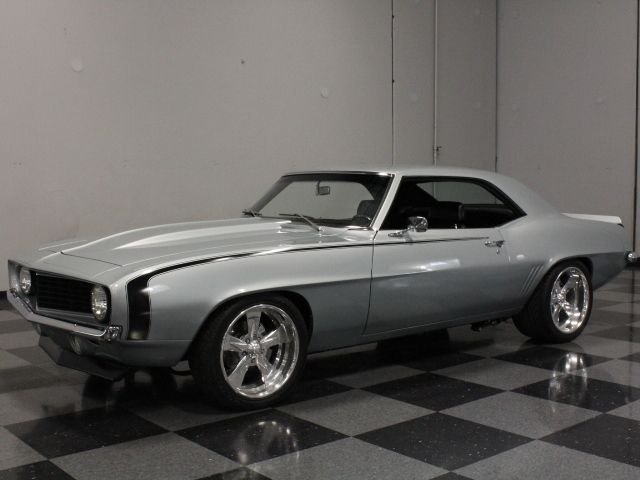 This 1969 Camaro SS is one of those cars whose list of modifications is so extensive that it's impossible to know where to start. LS1 power, 4-wheel discs, trick suspension, upgraded interior, and show-worthy paint, all just for starters. If you've been looking for a take-no-prisoners early Camaro, this nasty silver car just stepped up and volunteered for duty.

Cortez Silver is the right choice when you're looking for sleek, low-profile good looks, but this is hardly a subtle car. Nothing has been shaved or modified, although it does carry a cowl-induction hood that looks great. Instead, they focused on making sure everything was crisp and well-detailed, including the creases coming off the front fenders that look sharp enough to draw blood. The two-stage urethane paint gives the car a high-tech look, which certainly fits it well enough, and the lean Camaro shape looks pared down to its bare essentials. A black hockey stick stripe is the lone external adornment; almost all the badges, emblems, and other insignias have all been neatly stripped away. LED taillights in a blacked-out tail panel combine the old and the new in a unique way and the chrome bumpers are shiny enough to make this car look like a show piece if you didn't already know better.

The gorgeous interior is where the real modifications really start to show up. The high-back buckets look stock at first glance, but look again: they're custom pieces with aggressive side bolstering that is probably mandatory for a car that moves like this one. A three-spoke billet wheel emulates the original, again, using history to push the design forward. Custom gauges were stuffed into the original instrument panel and you'll note that the horseshoe shifter now manages four forward gears instead of the usual three, but we'll get to that in a moment. A true pro-touring car takes care of its driver, so this car also carries ice cold A/C and a decent AM/FM/cassette stereo system. If you can touch it, it's new, so things like the carpets, dash pad, and door panels are all in excellent condition. Even the trunk got a nice makeover with black carpets instead of the usual reproduction mats.

But the big changes are underhood, where an LS1 powerplant was neatly transplanted into the Camaro's engine bay. The LS1 is already legendary for delivering smooth power and unbeatable durability, and the all-aluminum V8 completely transforms the early Camaro without removing its soul. Custom color-matched coil covers make the engine look like it was born in this engine bay. The engine is linked to a 4L60E 4-speed automatic transmission and spins a custom-built Ford 9-inch rear full of 3.56 gears on a limited slip differential. The front suspension is a set of tubular A-arms, a fat sway bar, and custom coils, while the leaf spring setup out back is augmented by a set of trick traction bars that are a long way from those old slappers you used to use. Four-wheel disc brakes, a rumbling exhaust system, and a ton of new parts underneath all add up to a daily-driver supercar that only looks like a vintage Camaro. The finishing touch are those gorgeous 18-inch Boyd Coddington wheels, which carry 245/40/18 front and 335/40/18 rear Michelin radials.

These words don't come close to telling the whole story on this incredible Camaro. Come see it for yourself and you'll probably discover that there aren't many things on this Earth that you want more than this car. Call today! 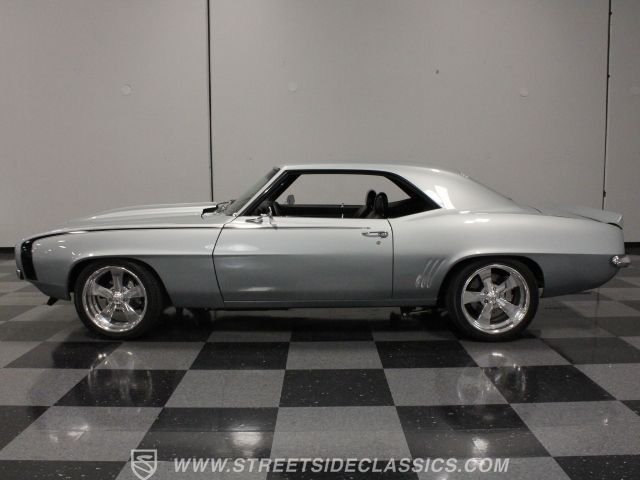