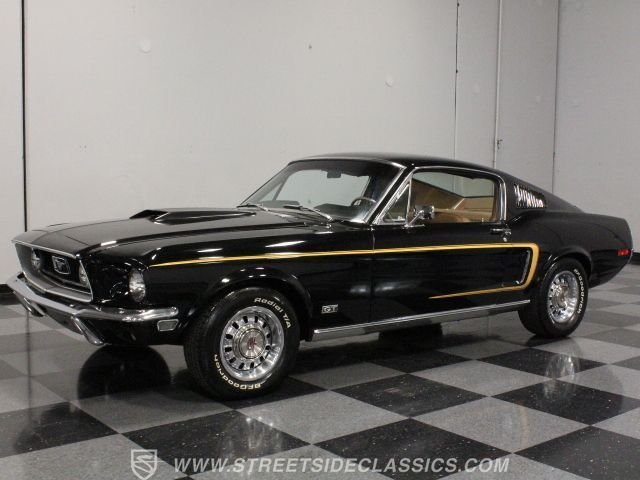 This 1968 Mustang GT deserves a quick lesson in numerology. First and foremost, the fifth letter in the VIN is an "R," which denotes a thundering 428 cubic inch V8, the top-of-the-line in '68 and perhaps the most desirable pony built that year. Secondly, according to the Marti Report, this car is one-of-one in black with a saddle interior, making it every bit as fast as a Shelby and considerably rarer.

Code A is Raven Black, and when the time came to freshen this very clean, solid car, it got a top-notch paint job worthy of its pedigree. There aren't many cars that are better-looking than a '68 Mustang fastback, and in black it looks downright predatory. Fit and finish are quite good, and since this car has undoubtedly led an easy life, there were no headaches involved in getting everything to line up just right. The hood scoop was part of the package when you ordered an R-code 428, and the gold C-stripe accentuates the classic Mustang side cove that is still visible on the cars today. Nice chrome, fog lamps in the front grille, and the delicate stainless trim that outlines the tail panel highlight a very nicely done restoration.

The code 2F saddle vinyl interior is what makes this car so special. Bright and distinctly upscale, the tan bucket seats transform this GT into more than a mere muscle car, giving it a grand touring feel when you're behind the wheel. A combination of old and new, the interior has a wonderful all-of-a-piece look that includes a nice set of door panels, and a fold-down rear seat, plus original features like the steering wheel and gauges. A pair of auxiliary gauges are discreetly stashed under the dash, and yes, that's a 4-speed shifter sticking out of the transmission tunnel, as if you expected anything else. A fold-down rear seat makes the fastback practical as well as stylish, and it includes an AM/FM radio for entertainment. The trunk is very nicely outfitted with a reproduction mat and a fifth matching styled steel wheel, which is an expensive finishing touch.

The R-code 428 cubic inch V8 was installed in only 1044 1968 GT fastbacks, and of those, only 706 had a 4-speed, so finding one of any kind is rather rare. Grossly underrated, these engines were over-achievers right out of the box and with a few small modifications became some of the most feared cars on the road in late 1968. Thanks to a comprehensive detailing that is worthy of the car's status, the engine bay is ready to show with Ford Blue engine enamel, a functional ram air hood scoop system, and little details like hoses and decals are correct. There are less than 1000 miles on the engine since it was rebuilt, and the only major modification is a set of headers and an X-pipe exhaust system, but it sounds so awesome you won't mind one bit. The underside was detailed, although not quite to the same standards as the engine bay. There's red oxide primer on the floors out back, a rebuilt power steering system, and a detailed 9-inch rear end with a Equal-Lok limited slip unit inside. Correct styled steel wheels look great and carry fat BFG radials all around.

A similar R-code GT fastback with an automatic transmission sold at Barrett-Jackson in Scottsdale last January for $165,000, making this sleek black 4-speed look like a screaming bargain. Call today! 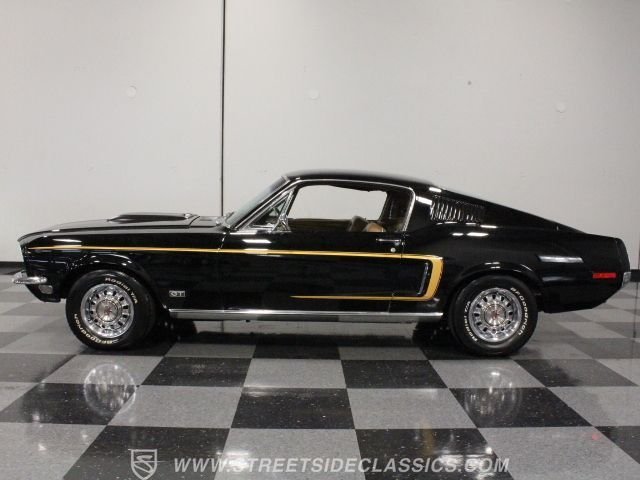