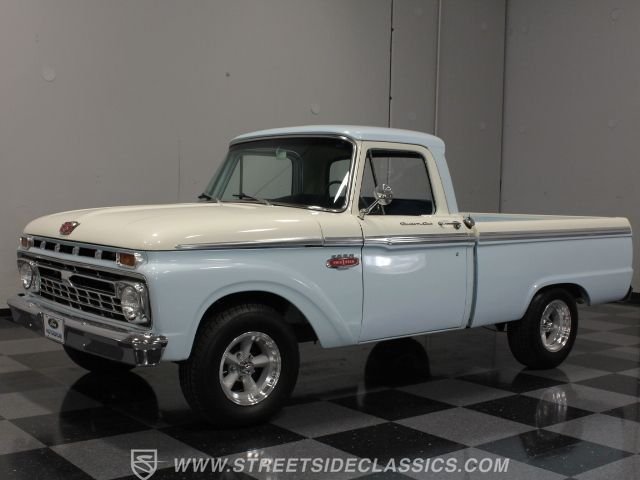 Trucks, we've got 'em! For Ford fans, this 1966 F100 Custom Cab represents the last of the heavily stylized '60s F-series, and with a burly 390 under the hood, it's a great example of a hauler that can move like a muscle car.

This truck neatly straddles the line between the highly detailed look of the late 1950s and the smoother, more purposeful F-series trucks that would follow. Wearing code FM Arcadian Blue and Wimbledon White paint, which is correct for this truck, it has a great pastel look that was probably a great choice in the mid-1960s. There's a nice shine to the finish and it has a great overall look that's a little broken-in, so it's casual and comfortable in any situation. Plenty of bright trim was the calling card of even pickup trucks of this vintage, perhaps because they didn't get tail fins in the '50s, and details like the grille, stainless side spears, and emblems are in good condition. And one look in the bed will prove that this truck hasn't been forced to work for a living for a very long time.

The bright blue interior looks fresh, too, with a snug fitting reproduction seat cover on the original bench, newer floor coverings with heavy-duty Ford mats, and a color-matched steering wheel. The look is future fantastic from the '60s, with lots of chrome on the instrument panel and a handsome steering wheel that would work equally well in a top-of-the-line Galaxie. An engine-turned panel surrounds the primary gauge panel, with secondary controls in a neat row underneath, just like the Ford passenger cars of the period. White door panels contrast nicely with the Arcadian Blue painted doors, and the driver's side includes a cool zippered map pocket that's actually kind of handy. Like most pickups of the period, there aren't a lot of options, but it does include the original AM radio in the dash that gives it just the right look for 1966.

The top engine in 1966 was a 352 cubic inch V8, but since there were bigger, stronger engines in the Ford arsenal that year, some enterprising soul has stuffed a 390 cubic inch big block between the fenders. Dressed in Ford Blue, it almost looks like it was born there, and with chrome dress-up, it has the same performance vibe as, say, a comparable Galaxie. An Edelbrock 4-barrel carb offers instantaneous throttle response and the big block moves the relatively lightweight pickup with genuine authority. Linked to a 3-on-the-tree transmission and a sturdy 9-inch rear end, it's easy to drive and even rides well with the Twin I-Beam front suspension soaking up the bumps. Dual exhaust gives the 390 a muscular sound and classic American Racing Torque Thrust wheels are the perfect period touch when you want to make things look a little racy. 235/75/15 blackwall radials have been fitted, so it has a great footprint that fills the fenders quite nicely.

A neat truck for Ford fans who like the old styling and a big shot of horsepower. Call today! 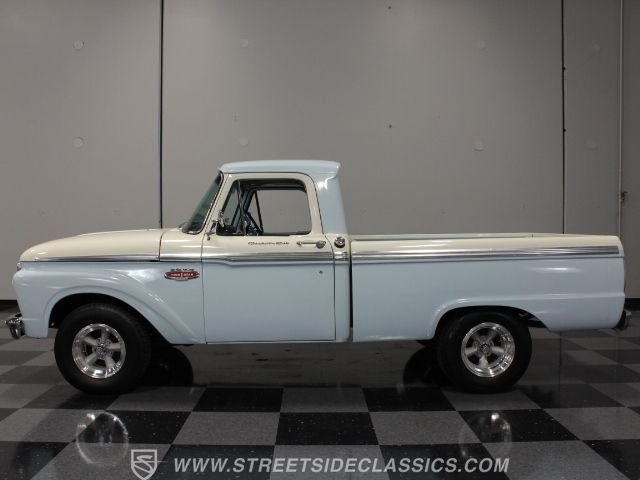