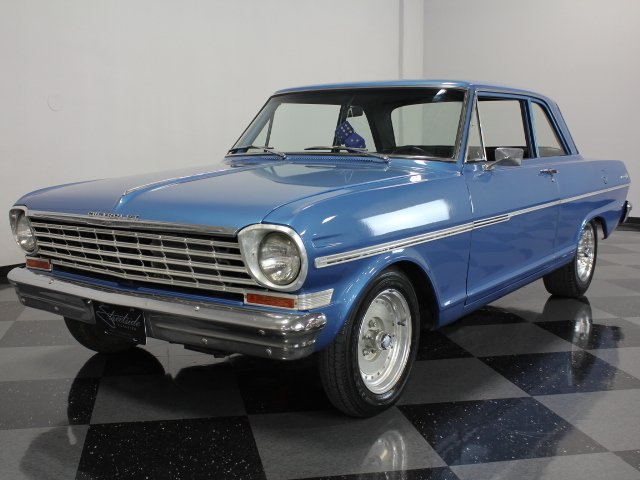 This 1963 Chevrolet Nova is a neat little bruiser that speaks softly and carries the proverbial big stick. With an unassuming look, this flyweight fighter is capable of beating up on some much more powerful hardware, all for a bargain price. Sound like your kind of fun? Read on.

The trick to building an effective street brawler is to keep it low-key. The Marina Blue paint has just the right '60s vibe that makes it look right when you're out cruising. Not detailed to show levels, it still looks good on the roll and when you stop to talk a bit with friends. There's a nice blend of new and old, with shiny paint and good original trim that suggests this car has spent its life in a pleasant place. The sheetmetal is quite straight, and if you're looking to run hard, the 2-door sedan is the body style you want, with its extra rigidity and lighter weight. No modifications to the body were permitted, not even a cowl-induction hood, and they resisted the urge to slap a set of SS badges on it or to even upgrade the grille. Instead, this looks like a clean, mild-mannered Nova with no stories to tell. And honestly, that was entirely the point. It's nice, but not too nice, and stock, but not too stock, if you know what I mean.

Inside, the black upholstery is clearly new, and it effectively duplicates the original stuff so nobody's eyebrows will be raised at a casual glance. The bench seat is original equipment, and works well with the low-profile mission, although the big B&M shifter will undoubtedly get people talking. You know this one was built for combat, however, when you see the tach on the steering column, the fat, small-diameter steering wheel, and auxiliary gauges under the dash, but nobody can see that stuff when they're next to you at a stop light. There's also an AM/FM/CD stereo so cruising is a pleasure, and the original instruments still look great. New door panels and carpets, plus a tight-fitting headliner clearly demonstrate that this was not a cut-rate build, and you'll have no complaints about spending Saturday night behind the wheel. The trunk is also clean and carries a remote battery which helps with weight distribution and makes room under the hood.

The engine is a 350 cubic inch small block, which isn't radical by any means, but thanks to the Nova's light weight, it gives the car impressive performance. Mild enough to drive every day, it was clearly built for the street. Chevy Orange paint gives it a vintage look, and the finned aluminum valve covers have been custom painted in such a way that you'll want to pop the hood every chance you get. It's linked to a 700R4 4-speed automatic overdrive, so it's fast and a comfortable highway cruiser, and with 3.23 gears on an Auburn limited slip, it hooks hard. Long-tube headers feed a pair of Flowmasters, and while the chassis is original, it's also rust-free and solid. Traditional Centerlines carry staggered 145/15 and 235/60/15 radials that are the only real giveaway to this car's intentions.

Big fun on a small budget, this Nova delivers in ways that cars costing tens of thousands more just can't. All you have to do is call! 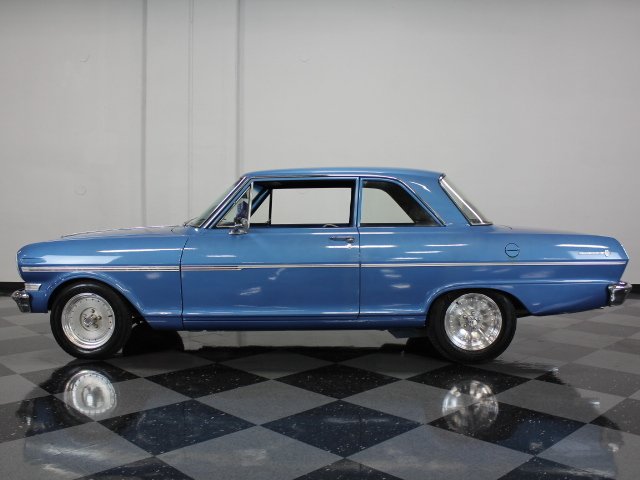