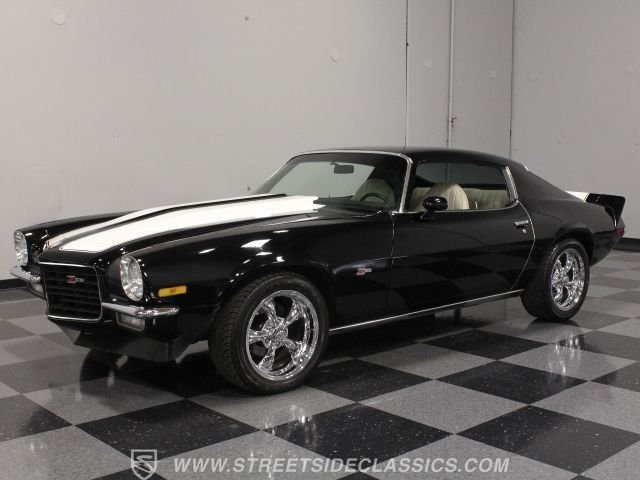 The second-generation Camaros no longer stand in the shadows of their older siblings, and in the right hands, this 1973 Z/28 is more than a match for just about anything else on the road. Awesome color combination, a 383 inch stroker motor, and a fresh 4-speed gearbox mean that it's a standout in any category you can name.

Black is only a mistake if you don't have the bodywork to back it up, but this laser-straight Z proudly wears the glossy paint and looks spectacular. Converted to RS spec, it's got the big front grille opening with bumperettes that really was the best-looking of all the second-gen cars, plus a chin spoiler and ducktail spoiler out back, so there's no getting around the fact that this car looks fast. White SS stripes, a cowl induction hood, and the predatory stance certainly help, but if you don't have the hardware to back up the look, well, it's really not worth playing the game, is it? Up close, you'll find that someone has invested the time to wet sand and buff the final finish, so its' smooth and glossy the way you always hope your black car will look, and proper Z/28 badges should probably serve as a warning to others in this car's case. Bright chrome bumpers look great on a black car and suggest that no detail has been overlooked in the build.

The interior turns the exterior color combination on its head, with white seats and black carpets and the look really works well. Instead of being dark and monochromatic, the interior is bright and airy with new white seat covers on the original buckets and two-tone door panels that look great. The original steering wheel and instruments are in great condition and the brightly finished instrument panel wraps around the driver and puts all the controls within easy reach. The Hurst shifter with cue ball knob is brand new, installed along with the swap from slushbox to 4-speed and suits the car's personality just fine. The car features a few notable features like a tilt steering column and an AM/FM/CD/iPod stereo that sounds fantastic, even with the cackling V8 up front. The trunk is minimalist with just spatter finish paint for décor, but at least you know there are no surprises hiding under a mat, and the amplifier and subwoofer for the stereo system are tucked up high and out of the way.

The freshly-built 383 cubic inch stroker motor brings the sound and fury to the party in a big way. Topped by a Holley 4-barrel carburetor and Edelbrock intake manifold, the combination is stout and very reliable, aided by an HEI ignition system to light the fires. Chevy Orange paint looks right, of course, and there's lots of chrome and polished aluminum to back up the fact that there's a lot of money invested under the hood. Long-tube headers dump into a Flowmaster dual exhaust system so it snarls and barks with genuine authority. As I mentioned, the car has been converted from an automatic to a correct 4-speed manual transmission, which feeds the original 10-bolt rear end. Turn the key, and the engine responds like it's ready to run, and given how much these stroker motors love to rev, the 4-speed is a smart upgrade. Shiny polished Torque Thrusts give it a lean, mean stance and carry 245/45/17 performance radials that make a huge difference in the way it feels on the road.

Looking to drive the nastiest second-gen Camaro around? This is it. And with a bit of touching up here and there, this could also be a serious show contender at a very high level. Call today! 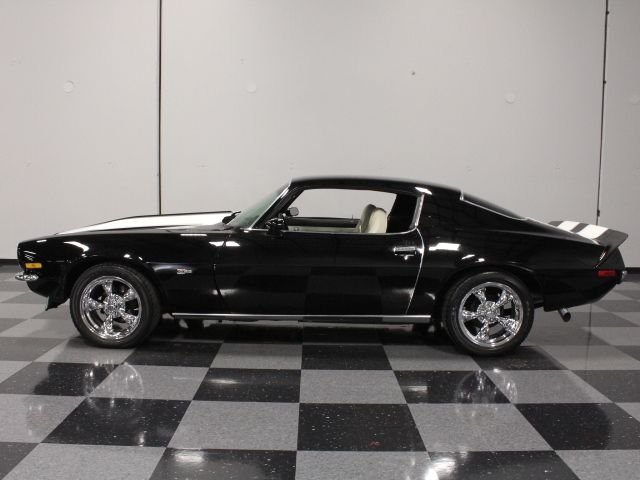