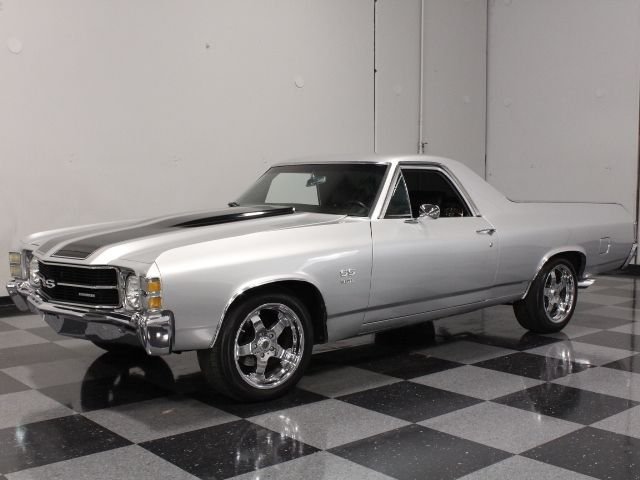 This 1971 Chevrolet El Camino is 1/3 pickup truck, 1/3 Chevelle, and 1/3 Corvette, making for a very entertaining and a surprisingly practical hot rod. And we continue to be amazed by how much performance you can get for your dollar with El Caminos, because if this was actually a Chevelle, it would cost twice as much.

Nevada Silver is an awesome color on an El Camino, giving it a slick style that belies the pickup truck practicality hiding within. The finish is in good order with a few signs of use but if you're really feeling ambitious and need to take it up a level, it'll look awesome with a professional wet sand and buff. But in the meantime it looks great going down the road and when you show up for local cruise nights, folks will have a hard time ignoring this car. Black SS stripes and a cowl induction hood certainly help in that regard, and anything with SS badges probably deserves respect on the street. Sharing the Chevelle's sheetmetal probably helps in the looks department, and there are a lot of guys, myself included, who prefer the single headlight setup of the '71s. For practical purposes, the bed was covered with spray-in bedliner material, so it's still able to work a little bit on weekends, and sparkling chrome always looks awesome against silver paint, making this car look up-to-date and sleek.

There's more shared DNA inside, where you'll find modern bucket seats out of a late-model, complete with SS embroidery on the seat backs. Slide in behind the squared-off wheel that isn't out-of-place in this truck/car and key it up, watching the dash alight with red Dakota Digital instruments stuffed into the original instrument panel. The headliner and carpet are new and it sure looks like the door panels were replaced at some point, because they're just too nice to be 42 years old, and there's a factory center console complete with horseshoe shifter, which looks as cool here as it does in the Chevelle. An impressive stereo system includes an AM/FM/CD head unit powering 6x9 speakers and a built-in subwoofer behind the seats. The equipment is in place for A/C, too, so if you like to keep things cool, it shouldn't be a major chore to get it back online.

Open the hood and you'll see where the Corvette part comes in. That's a 1996 Corvette LT1 V8, which makes a nice, round 300 horsepower thanks to fuel injection and computer controls. No El Camino ever ran this well in 1971 and after you try it on the road you'll wonder why anyone would need a big block. Installation is neat enough to make some folk believe it was built that way at the factory and there's no need for flash when you have folks doing double-takes the moment they see it. That same Corvette also donated its 4-speed automatic overdrive transmission, so this truck/car is a fantastic highway cruiser that just loafs at highway speeds, yet feels snappy around town thanks to 3.73 gears on a Posi inside the 12-bolt rear. Four wheel disc brakes were added, which is probably a smart thing given this Elky's performance potential, and a custom 3-inch exhaust system with Flowmasters makes for one heck of a soundtrack. Shiny American Racing wheels look right and carry 235/55/17 tires that are the right size to fill the wheel wells without looking oversized.

The most successful resto-mods are those that seamlessly blend old and new, and nothing succeeds like putting four decades of technology to work on your vintage hardware. Call today! 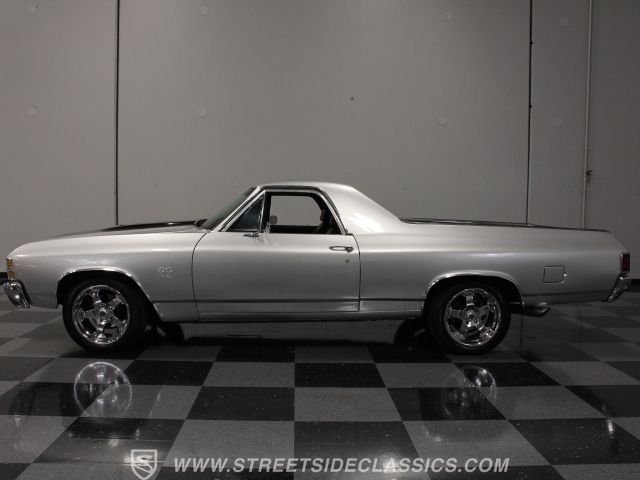