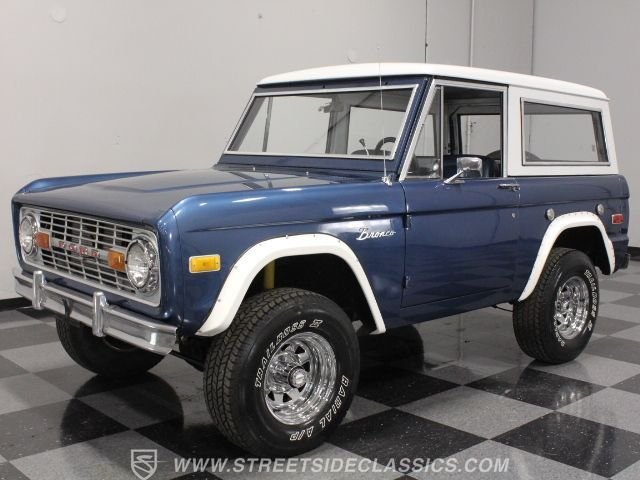 Vintage 4x4s are currently the hottest thing on wheels in the collector car world, with Toyota FJs going into six-figure territory and early Ford Broncos like this 1976 V8 are seeing big jumps seemingly every month. So it's with that in mind that I tell you that you should buy the best Bronco you can afford, because they aren't going to be getting any cheaper and a lot of them are going to get high-dollar restorations in the coming years, pushing prices ever higher.

By 1976, the Bronco was getting long in the tooth, but for collectors, the latest versions are often the ones that are most highly prized. Wearing bright blue paint with white details, this one has FORD written all over it and perfectly captures the rough-and-tumble look of Ford's early SUV. The repaint was done some years ago, so it's seen its share of use, but who wants to own a flawless Bronco? No, instead you can take this one out to play in the dirt without worries and as you can see, it still shines up quite nicely for shows on Saturday. It doesn't look as though it's been beaten up on the trails, however, which is an important distinction to make, and the doors fit well enough to suggest that it has always been well-maintained. White fender flares add to the sturdy look and match the removable white hardtop, and with a few touches of chrome like the bumpers and grille, it has a look that's welcome almost anywhere.

Sporty low-back bucket seats make this Bronco feel like more than just another truck, and the jaunty blue upholstery looks fantastic inside the equally blue Bronco. Heavy-duty floor coverings mean its' ready to play but the brand new woodgrained door panels give it an upscale flair. A few tasteful modifications add to the driving experience, including a fat steering wheel, locking center console, and new Vintage Air under-dash A/C, a very welcome addition. The gauges wear white faces that are a modern touch that is strangely appropriate in this truck. An AM/FM radio powers a few speakers stashed throughout the interior, providing plenty of sound even when you're running alfresco. A six-point roll cage is certainly reassuring when you're on the trail, but it and the hardtop are completely removable for more sedate driving in the sun. There's also a bikini top for those times you just need the bare minimum.

It took Ford a while to drop the 302 cubic inch V8 into the Bronco, but it completely transforms the truck. Recently rebuilt, the Ford Blue V8 under the hood here runs superbly and delivers the kind of smooth torque that makes climbing through the brush a pleasure, not a chore. A lot of money obviously went into the build here, with fresh components everywhere you look, including the power steering and brake systems. It's backed by a C4 3-speed automatic and a 2-speed transfer case, which feeds power to both ends. Lots of new suspension components and an auxiliary gas tank mean it's ready for adventure and the recent exhaust system offers a polite V8 burble that never becomes annoying. Shiny chrome wheels look great and are wrapped in 31x10.50-15 off-road radials that look like they have a lot of life left in them.

The day is coming when this truck will seem like a bargain. With V8 power and plenty of creature comforts, it's the Bronco you'll regret not owning in a few years. Call today! 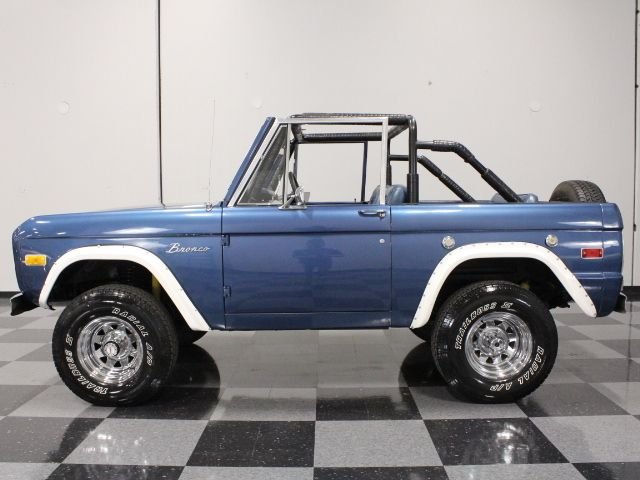