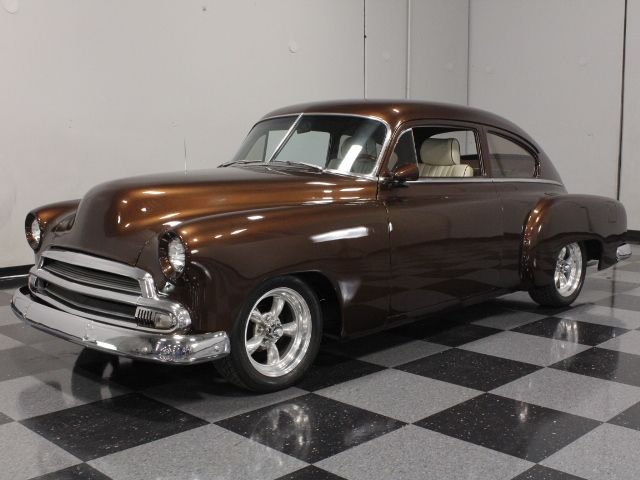 This 1951 Chevy "Jetback" coupe is one of those cars where the more you look, the more there is to see. Tastefully modified, it has a host of awesome features that were built right in at the factory, then tweaked to a higher standard when it was modified just a few years ago. Take your time with this one, because there's a lot to see here.

GM's fastback styling hit the market in 1941, spread quickly through all the divisions from Chevrolet to Cadillac, and then vanished just a decade later. The cars that were left, cars like this awesome little Chevy, were some of the most attractive cars of the period with forward-looking styling that looks good no matter what you do. The list of mods is pretty extensive on this one, from the shaved bodywork and frenched headlights to the trick taillights that actually come from a Kenworth. Other details like the simple grille and bumper, the unique wrap-around split windshield, and wrap-around rear bumper are OEM stuff. The paint is gorgeous Root Beer Brown with a pink pearl topcoat that gives it a sheen and depth and a hint of candy goodness inside when you see it out in the sunlight. Even in the studio you can see how the paint highlights the car's graceful curve and although the bodywork is perfect, the overall look is spectacular. It's got some signs of use, because, after all, this car has been driven and enjoyed, but after all – how could you resist, that's what it's built for.

This Chevy has definitely moved up in the world, because the interior is wrapped in sumptuous leather wrapped around Mercedes-Benz buckets. The commanding driving position is possible thanks to the fastback's sleek roofline which doesn't need to be chopped to look modern, and it goes without saying that the chairs themselves are supremely comfortable. The stock dashboard was treated to a two-tone makeover, complete with the original gauges still in place and an under-dash A/C unit for comfort that didn't require cutting things apart. That pod in the center is the original clock, another cool touch that seems custom but isn't, and there's a fabricated center console with an AM/FM/CD stereo head unit built right in. The dark carpets anchor the interior and give it a substantial look, and the quality of the materials means that there's minimal wear on any of the surfaces. There's even a good-sized trunk under that sloping deck lid, fully upholstered in matching brown carpet.

The powertrain breaks no new ground, but a Chevy 350 in a Chevy makes a lot of sense, don't you think? It's neatly dressed with some chrome dress up and the engine bay is sensibly arranged for easy maintenance. Modern features like power brakes and a Mustang II independent front suspension make it feel quite modern on the road and the engine makes plenty of power. Backed by a TH350 3-speed automatic and a 10-bolt rear end, it's incredibly reliable and the suspension modifications make it ride like a Cadillac. Twin Flowmasters give it just the right rumble that's not annoying on the highway and it sits right with a bit of a '50s custom look. Sparkling Torque Thrust-style wheels stand out against the dark paint and carry staggered 205/55/16 front and 225/50/16 rear Toyo radials.

With a seamless blend between stock and modified, this wonderful 1951 Chevy is one of those rare rods that successfully blends great looks and daily driver practicality. Call today! 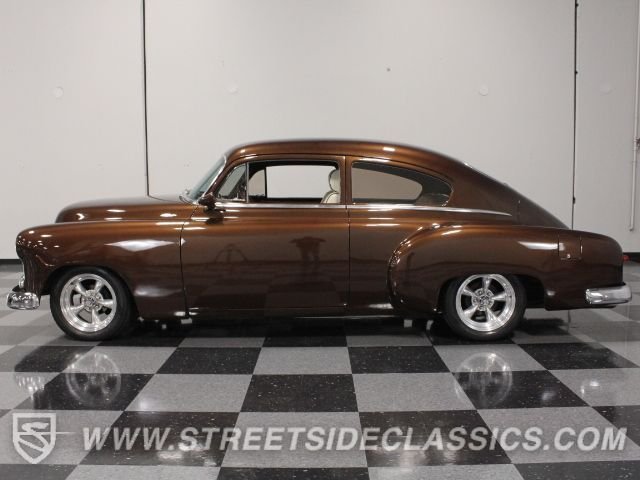