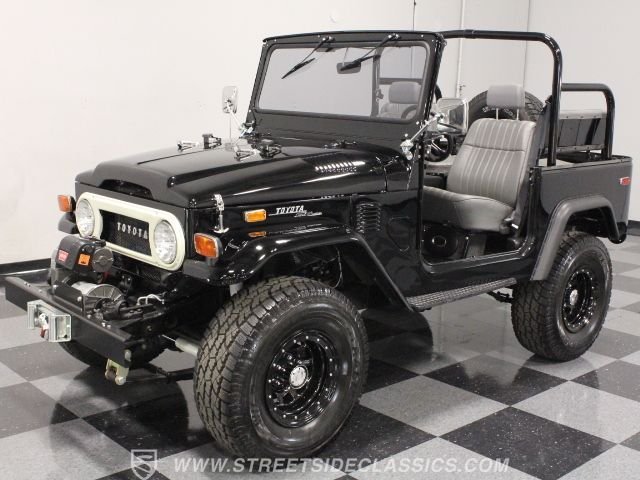 Of the 24 Toyota FJs that were offered at the Scottsdale auctions in 2014, 23 sold, with an average price of $71,523. That figure certainly puts this 1973 FJ40 Land Cruiser into context, which in comparison seems like a screaming bargain. With just over 800 shake-down miles on a fresh build, along with some pretty spectacular upgrades, this can only be considered a very smart buy.

This FJ was definitely built with a clear vision, beginning with a solid, clean FJ. It was stripped bare and refinished from there, keeping all the things that are awesome about these tough little trucks and giving it some significant upgrades that only make it tougher. The guys at Tutt's Garage did a downright spectacular job of refinishing all the bodywork, prepping it in anticipation of that glossy black paint job, which would tolerate no mistakes. The gas tank was relocated from underneath the passenger seat, which means that the filler door had to move, too, but if you're not an FJ expert you wouldn't even notice that it had changed. There's a big Warn winch on the nose that looks capable of pulling an oak out of the ground, and the traditional white grille with close-set headlights shines out of the black paint like a beacon. Proper chrome badges were fitted, and the builder spent a small fortune at Cool Cruisers of Texas locating original OEM trim, badging and gauges to keep things authentic, all fully re-chromed and refurbished, of course. A heavy-duty tire carrier out back keeps this one ready for trails, loaded with a matching giant spare tire. We've seen a lot of FJ40's out there over the years, never one as nice, and thoroughly built as this – the pictures don't even do it justice.

The all-new interior keeps the FJ's rugged simplicity by using the original buckets and side-facing bench seats in back and covering them with durable, comfortable gray vinyl. The floors and the rest of the tub were coated in spray-in bedliner material that's durable, attractive, and easy to maintain, and the original gauges were all fully rebuilt. You'll note a late-model tilt steering column and Grant GT wheel were added, along with a locking center console for security. An AM/FM/CD stereo was stuffed into the dash and looks like it belongs there, with speakers cleverly installed throughout the body. There are also auxiliary gauges underneath and if you look carefully, you'll note that the shift knob now shows five forward gears instead of four, but we'll get to that in a moment. A new BestTop folding convertible top is included along with 2-piece doors, so it does offer more than a modicum of weather protection and there's a brand new bikini top still in the box.

Underneath, this is no stock FJ. The original six was dumped in favor of a thumping 350 cubic inch Chevy V8, and the minute you turn the key and it barks through a true dual exhaust system, everyone will know this one is special. Topped by a 600 cfm Holley carb, the tidy Chevy is a neat fit in the Toyota's engine bay, and it includes such niceties as Saginaw power steering, power front disc brakes, and a hydraulic clutch between the engine and the NV4500 5-speed manual transmission. The original transfer case was rebuilt and linked to axles with 4.10 and 4.11 gears inside, respectively. Everything hangs on a Rough Country suspension with a modest 2-inch lift, and you'll note that the workmanship underneath is every bit as impressive as the rest of the truck. Just check out that custom dual exhaust system! Custom black powdercoated Cragar alloys look right and carry 33x12.50-15 off-road radials, including the spare.

One of the nicest FJs we've ever offered and in a market that's red-hot, something this cool just won't last. Call us today for all the details! 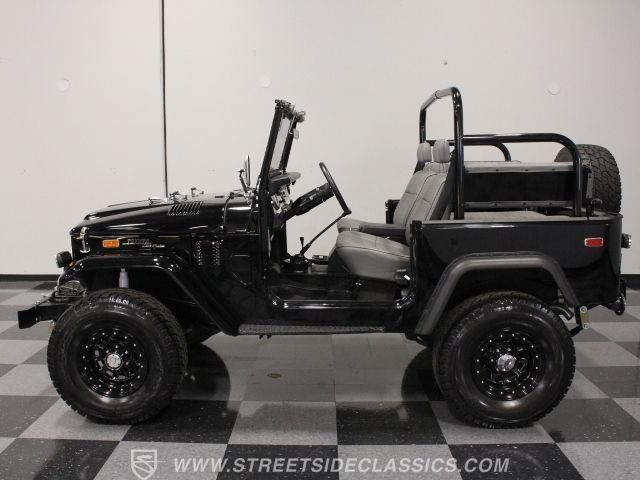