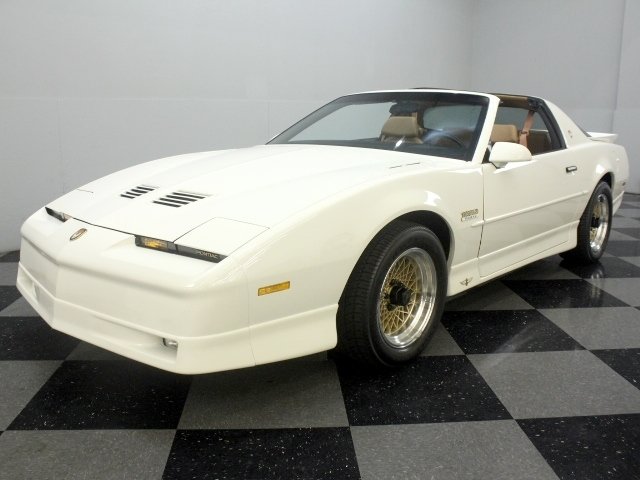 The Turbo Trans Am was the car that had Corvette engineers furious at their Pontiac counterparts. Take what was arguably the most potent engine in GM's arsenal and put in a car that actually had handling and braking to match, and voila! Instant street predator. PHS documented # 1431 of 1555 total cars produced, this nicely preserved example shows just 6955 original miles, making it perfect for the Firebird collector who thinks he has everything.

Turbo Trans Ams are easy to spot with their white paint, tan leather interiors, and special badging, but the overall look is subtle. The white is a nice off-white, not a bright refrigerator white, which somehow makes it more menacing-after all, how fast can an off-white car really be? The cars did get the full Trans Am treatment, including ground effects, fog lamps, and a wrap-around rear spoiler, which, on this car, is in excellent condition with none of the usual cracks. It also shows expert maintenance, as the 23-year-old bodywork (has it been that long already?) shows no fading or road rash, and it has never been hit or repaired. And while a lot of these were dressed up in Pace Car regalia, they always look better without it, and the original owner wisely chose to forego the door decals.

Inside, the tan leather buckets are immaculate, and they'll be instantly recognizable to any Pontiac fan, since these same seats were used for several years in upmarket versions. They're supportive and comfortable thanks to a myriad of adjustments, and show exactly zero wear. These cars came loaded with A/C, power everything, and enough buttons on the steering wheel to pilot the USS Enterprise, but it all works well with Pontiac's performance image. It's all fully functional, too, and the only deviation from stock is a small switch next to the original radio which controls the Performance Sound MP3 function. All the carpets, the trunk, and even the original floor mats are virtually unmarked, making this an investment-grade Pontiac.

In the Buick Grand National, the 3.8 liter turbocharged V6 was potent, but saddled with a boxy luxury car, it didn't do much beyond go fast in a straight line. Not so with the Pontiac, where it became an ideal marriage of horsepower and grace. GM played with the horsepower ratings so that the Corvette was still the top dog, but even to this day, the Turbo remains the fastest-accelerating Trans Am of all time. The engines were specially built in their own factory, too, and with a massive aftermarket supporting the Buick guys, staggering performance is only a few bolt-ons away. Fortunately, this one has been left alone, and retains 100% of its stock equipment, and has never been raced or abused, so it's either a blank slate or an immaculate preservation-class piece. Even the original gold alloy wheels are wearing 1989-vintage Gatorbacks with their original valve caps!

It never hurts when your investment is also a party to drive, and few cars are more entertaining than the Turbo Trans Am. Call today! 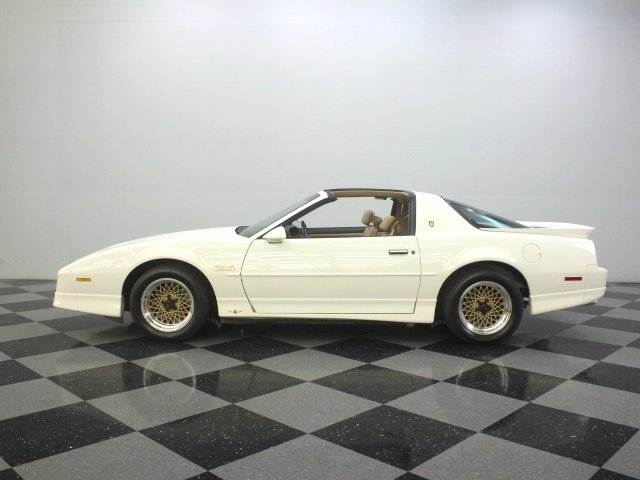