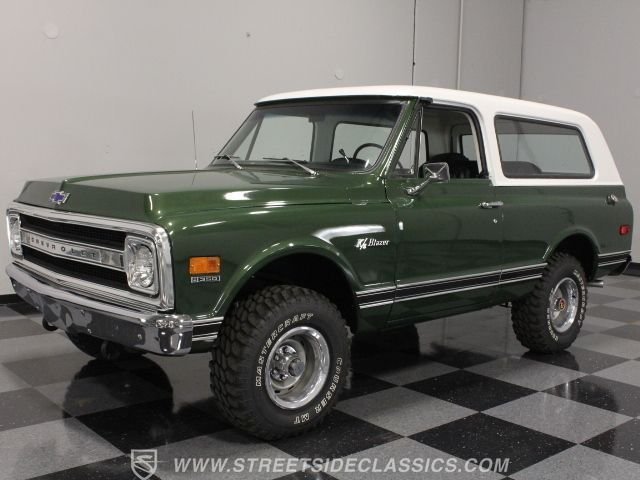 Chevy's entry into the early SUV wars was bigger, stronger, and carried more horsepower than its competition. By the time this 1972 Blazer was built, it was clear that Chevy's vision was the right one, and now that it's forty years later, they're justifiably highly-sought vehicles.

Finished in Dark Olive Green, which was on the Chevy Trucks color palette in 1972, this awesome K5 Blazer has the right look. Considerable time and money were invested in the bodywork, which looks like it has lived a vast majority of its life on the pavement and under cover, because few vintage off-roaders are this straight. The Chevy's squared-off bodywork, borrowed from the pickup truck line, looks just as good with an enclosed cab, with a simplicity that only enhances its brawny good looks. The paint is modern urethane, so it has a wonderful shine that's deeper and more durable than the original enamel, and with super straight bodywork underneath, even dark paint looks fantastic. The grille is a brand new reproduction that experts will note is a 1970 piece, which some enthusiasts seem to prefer, and the chrome bumpers have been refinished. The searing white top is completely removable for an open-air experience, and that, too, is in exemplary condition.

Bucket seats emphasize the Blazer's sporty personality, and they're covered with brand new seat covers that feature GM's patterned vinyl that was surely designed to evoke the old west and "real hand-tooled saddle leather." Today it adds interest to the no-nonsense interior, which is also dressed up with new door panels, a fresh dash pad, handsome gray carpets, and some of the best-looking gauges ever installed in a truck, including a rare factory tach. An aftermarket center console adds some much-appreciated storage as well as a few cup holders, and a T-handle on the transfer case adds a period-perfect degree of sportiness. An AM/FM/cassette stereo head unit fits neatly in the dash above the original heater controls and uses speakers in the doors and in the rear quarter panels. The rear seat is covered in the same cool patterned vinyl and has room for three passengers, making it considerably more spacious than its nearest competitor, the Ford Bronco. The rear cargo area is also quite sizable, where it carries a full-sized spare and still has room for all your gear.

A 350 cubic inch crate motor fits easily in the truck-sized engine bay, offering impressive service access and a lot of new equipment. Chrome valve covers and a matching Chevrolet air cleaner are obviously not OEM, but they add some sparkle to the satin black engine bay. Given the condition of the inner fenders and firewall, this truck has definitely not seen a lot of off-road time, but with all that new hardware, you shouldn't be afraid to go off the beaten track. Long-tube headers feed a Flowmaster dual exhaust system that sounds more Camaro than Blazer, but you'll certainly appreciate it when you're out having fun. The underside is in good condition with a nice dusting of undercoating, a TH350 3-speed automatic transmission, and 3.73 gears in the axles. You'll also find a new gas tank, fresh shocks, and shiny chrome axle covers just so it looks good. Factory Rally wheels are period-correct and carry big 31x10.5-15 off-road radials that totally stuff the wheel wells.

You won't find many vintage Blazers nicer than this. With all the right hardware, a great color combination, and limited off-roading in its history, you can buy with confidence. Call today! 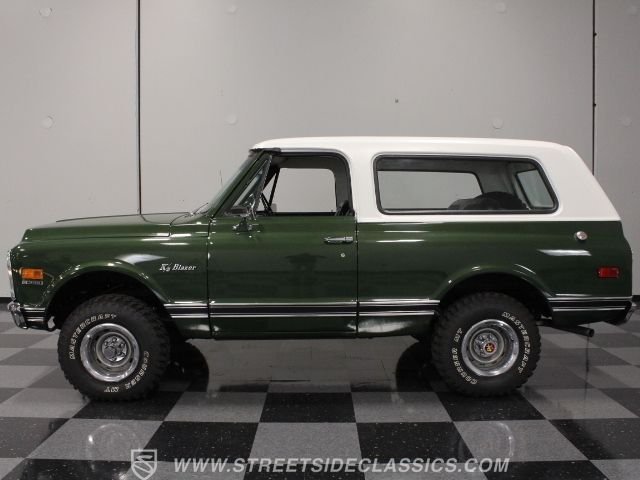