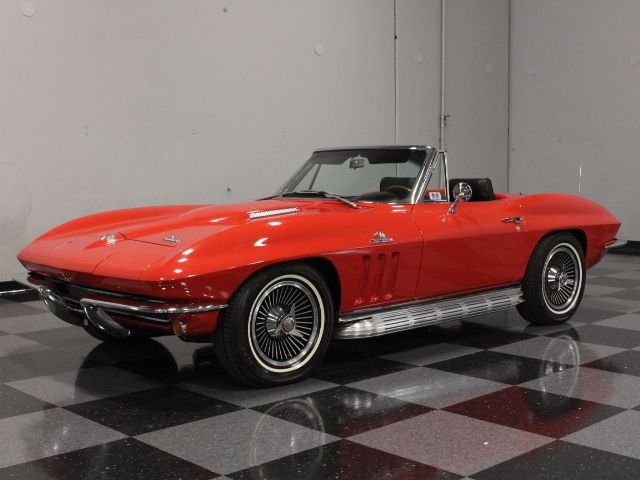 It's bright red, the top goes down, there's a numbers-matching L36 427/390 under the hood, a 4-speed between the seats, and a fresh restoration all over the whole dang thing. If you've been looking for just the right mid-year Corvette to add to your collection, but aren't the kind of guy to hide it in a trailer but would rather hit the road, this is your next car.

With less than 2000 shake-down miles, this car is really fresh. Of course, we don't ever call a car perfect, and yes, there's a small chip on one of the headlight doors, so it isn't flawless (you can't even see it in photos), but I challenge you to find another one this nice that doesn't have a six-figure price tag. The prep and finish work were done to a standard that you'd expect on a high-quality and pedigreed car like this, and the final Rally Red paint job is simply stunning. That's this car's original color and there aren't many better choices on a mid-year 'Vette. With a 427 and side pipes, you aren't trying to keep a low profile anyway, right? Panel gaps are excellent, the fiberglass is smooth and doesn't show any of the usual issues, and it's been carefully bolted together knowing that it was going to get a ton of scrutiny everywhere it goes. The few bits of chrome and stainless trim have also been either restored or replaced, and the emblems on the nose and tail are crisp and bright. It really is as nice as it looks in photos.

The interior is correct code 402 black leather, not vinyl, and according to the trim tag, that's how it came from the factory. Both seats have headrests which were an unusual option in 1966 (they weren't mandatory until '68), and the steering wheel is real wood, not simply a woodgrained piece. Restored gauges are bright and crisp and it'll take a practiced eye to spot the A/C that was added, with the knobs cleverly integrated into the dashboard so they don't look out of place. There's an AM/FM radio in the center stack, just ahead of the bright chrome shifter for the 4-speed gearbox, perhaps the interior's most alluring feature. For weather protection, there's a brand new black convertible top as well as a rare factory hardtop that's been painted to match and restored to the same high standards as the rest of the car.

Tilt the hood forward and you'll find the original, numbers-matching L36 427/390 horsepower V8, which makes this one an incredible performer, and it was also the lowest-production engine in 1966. Fully rebuilt, including a roller cam for a little extra horsepower, it's detailed for show purposes, with correct fittings, colors, textures, and decals throughout. Of course there's Chevy Orange paint everywhere it belongs, and again, the A/C system has been neatly installed to stay almost out of sight. There's also a modern dual master cylinder for safety, which is a good idea on a car that you're not going to be able to resist driving, and it barks through those side pipes with a sound that'll make your toes curl. The chassis is equally well-detailed with correct GM parts used throughout, and thanks to careful tuning it runs and drives beautifully. Crisp knock-off wheels wear modern 215/75/15 whitewall radials that look right and really improve the ride and handling in a big way.

Complete with the original Protect-O-Plate, window sticker, and owner's manual, this is an investment-grade Corvette that was built with shows in mind but the heart of a driver underneath. Call today! 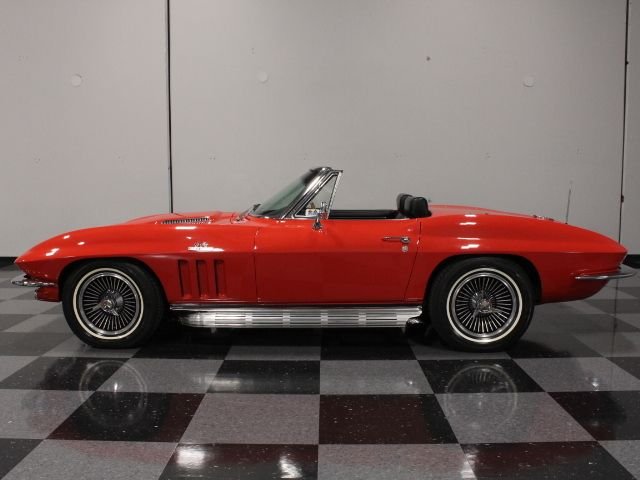