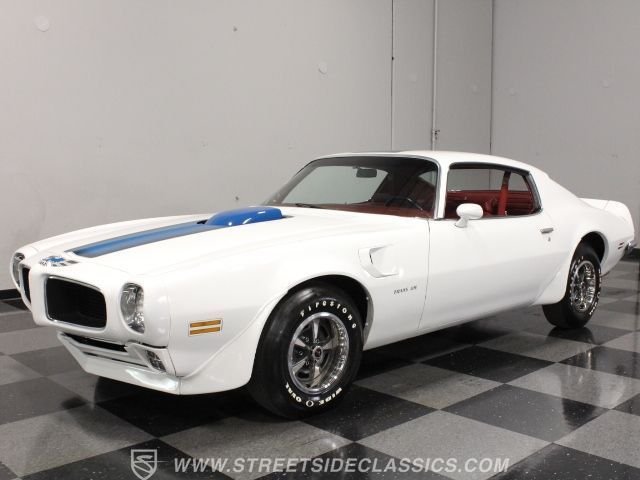 You don't need us to tell you what an opportunity this 1970 Pontiac Trans Am represents. Beautifully restored with an awesome color combination and a matching-numbers drivetrain, it is not only a fantastic example of the breed, but is also a smart place to put your money in these uncertain times.

The traditional Trans Am paint scheme of Polar White with blue stripes is unmistakable, even on the new-for-1970 bodywork, and the look is full-on aggressive. A deep chin spoiler, hood scoop, air extractors on the front fenders, and a ducktail spoiler all give it a high performance look that was probably the genesis of Pontiac's fascination with body decoration. Finish quality is quite good all around, not perfect, but more than nice enough to stand up to the kind of scrutiny that any pedigreed car is going to get at shows. Correct decals were installed, and while they're not exactly subtle, they're a far cry from what the Trans Am would become later in the decade. The wide front grilles, the flared fenders, and all the other little details that make these cars special also combine to make it one of the most feared and recognizable predators on the street in 1970. There's not much chrome left, but that rear bumper doesn't look out of place and shines up nicely under the slick rear spoiler.

The red interior is what makes this Trans Am truly special, and yes, that's how it came from the factory. While a vast majority of its siblings received black or blue guts, the bright red inside this hardtop gives it a totally unique look that totally works. The seat covers, carpets, door panels, and other soft parts were restored with the rest of the car a few years ago and with limited use, still look great. The engine-turned dash, the gauges, and the center console are all like new, and even the original AM/FM radio is still in the dash, reminding us that cars like this don't need additional entertainment systems. The three-spoke steering wheel is one of the era's better designs, with racy open spokes and a leather wrapper that feels great in your hands. It's all quite correct and nicely finished with plenty of evidence that the guys doing the work understood that this is an important car. Open the deck lid and you'll find a reproduction mat, jack assembly, and a space-saver tire that's never been used. Nice!

All 1970 Trans Ams used Pontiac's 400 cubic inch V8, and this Ram Air III version is rated at 345 horsepower and a stunning 430 pounds of torque. This is the car's original, matching-numbers engine, rebuilt to stock specs and detailed for show. The big air scoop is probably its most defining feature, but Pontiac guys knew owners would be showing off the hardware, so they added chrome valve covers and slick Pontiac Turquoise paint to make it look special. Underneath, the TH400 3-speed automatic transmission and 12-bolt rear end are also original to the car and highlight a nicely restored chassis. It's not totally fresh anymore with signs of use, but that also means it's fully sorted and not so nice you're afraid to use it. And I especially like the Rally II wheels wearing original-style F70-14 Firestone Wide-Oval bias-ply tires, as original.

This is a big hitter in the muscle car world, and with the awesome color combination and matching-numbers, it should be at the very top of any Pontiac fan's wish list. Call today! 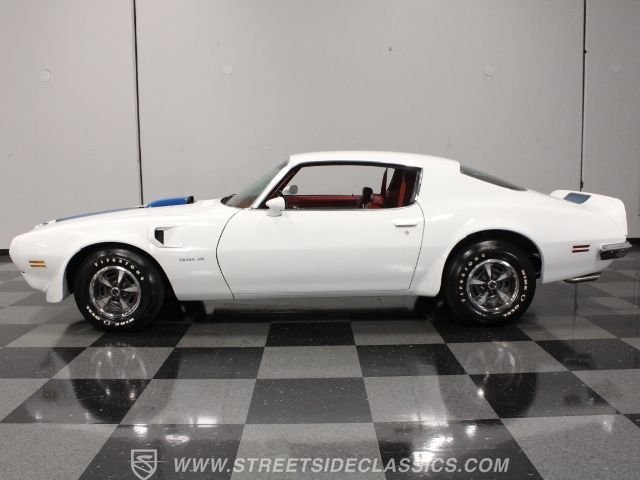