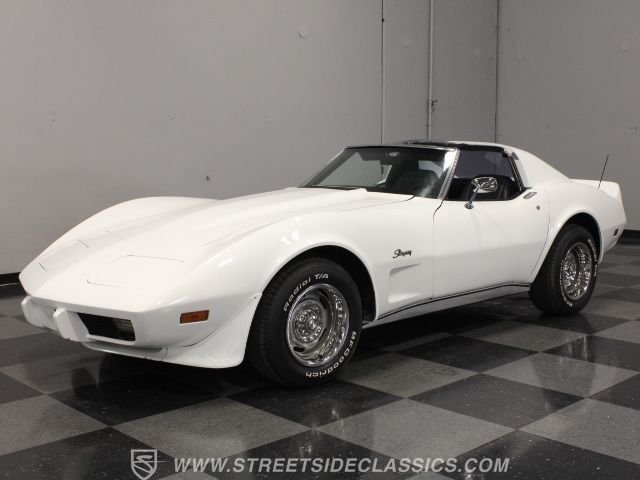 You don't often hear the words "tastefully modified" and "Corvette" in the same sentence, but this handsome 1976 Corvette nails it with a classic color combination and a cackling small block crate motor.

In case you haven't noticed, '70s Corvettes are on a bit of a streak these days, with new Corvette fans turning up almost daily and embracing the affordable fiberglass they represent. This one doesn't presume to be a show car, but instead is happy to be a clean, handsome Corvette with a fantastic look that will definitely get noticed. The most obvious change is the custom rear bumper cover with integral ducktail spoiler, which is a later C3 Corvette look that works quite well on an earlier car like this. You know something's different, but you can't quite put your finger on it, right? This one was originally silver but got a thorough white repaint a few years ago that's holding up well with only a few signs of age in the usual spots. You can tell that someone spent some time on it, since there's no trace of the original paint in the door jambs or under the hood, and fit and finish are above-average for a mid-70s 'Vette.

Inside, it's pretty much stock, but the C3's interior design has aged quite well, especially in basic black. A color change from Firethorn red upholstery means that there are newer seat covers, door panels, and carpets, which are in excellent condition today. The interior still has a fresh look, and who can argue with a low 2-seat cockpit bristling with technology, even if it is 1970s technology? The gauges are crisp and clear, with a full array of auxiliary gauges in the center stack as well as a newer AM/FM/cassette stereo head unit that fits neatly in the dash. Performance fans will also be pleased to see the 4-speed manual shifter sticking out of the center console, meaning that this is one of the more involving Corvettes to drive. And where the exterior is extroverted, the interior remains sophisticated and neatly done, not to mention quite comfortable, so you shouldn't be afraid to drive this car everywhere you go. Pull the T-tops and have some fun!

The top engine in 1976 was the L82, but the modern ZZ4 crate 350 that's in there now trumps it in a big way. With aluminum heads, a 4-barrel carburetor, and a fairly aggressive cam, the ZZ4 cranks out 335 horsepower and 405 pounds of torque, making it a lot more potent than this car would have been new. It's an all-business look under the hood, but that's OK because keeping it OEM-looking was the point. Underneath, the chassis is clean and straight, just the way you'd want it on a Corvette you planned to drive, and the 4-speed transmission is a very willing and able dance partner out on the road. There are lots of new components underneath, including a great-sounding dual exhaust system, and this one really shows off how easy a life it's had in a warm, dry climate. And despite the big horsepower upgrade, this Corvette doesn't really advertise, instead sticking with stock Rally wheels and 235/60/15 BFGoodrich T/A radials.

This is a great-looking Corvette that is surprising fast and packs a 4-speed transmission, so you need not make any apologies for falling in love. Call today! 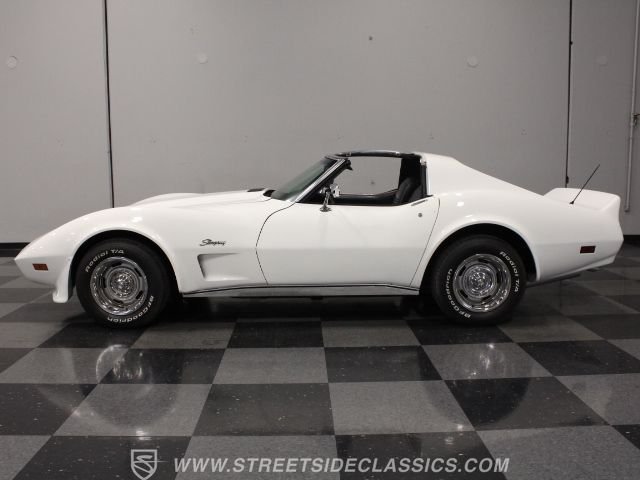