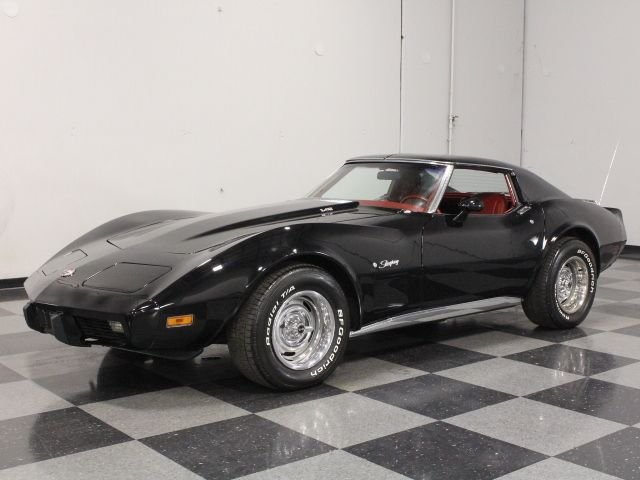 We probably sell more C3 Corvettes than anyone else, but in the midst of all the Special Editions and Anniversary models and pace cars, this black-on-red 1976 Stingray stands out. Beautifully restored about two years ago, it's probably the best-looking sub-$20,000 car we've ever offered.

Interestingly enough, there was no black paint on the Corvette color chart for 1976, but it never goes out of style on Chevy's plastic fantastic. The extensive repaint covered every noteworthy surface of the car with shiny black urethane, which, once cured, was buffed to the kind of shine only a black car can really carry. Fit and finish are quite good and particularly impressive for the price range, and you'll note they took no liberties with the classic shape and just put it back together the way the factory might have wanted it. You can see in the photos that the surfaces are smooth and glossy, and it's probably true that black paint makes any car look like a million bucks. All the shiny trim was restored and chromed while the car was apart, including the rocker moldings and trunk rack on the rear deck, and most of the weather-stripping appears new, too.

The vivid Firethorn leather interior is, however, how this car came from the factory, although it was also restored two years ago and looks incredible against that black paint. Bucket seats are every bit as comfortable as they look, with only very, very minor signs of use since the work was completed. New carpets and door panels enhance a very polished presentation, and it even looks like the steering column was repainted and the steering wheel was refinished, too. By 1976, the Corvette was as much grand tourer as sports car, so things like A/C, power windows and locks, and a tilt steering column are pretty much expected and there's an AM/FM stereo radio in the center of the dash. You'd think that it would be red overload inside, but the overall effect is quite elegant and polished, and it's part of why this Corvette attracts so much attention on the showroom floor. It's a combination that will simply never go out of style.

The "L" in the VIN means this is an L48 350 cubic inch V8, rated at 180 horsepower. It was rebuilt a few years ago and runs as you'd expect the world's most popular V8 to run. Turn the key and it fires quickly and while 180 horsepower doesn't seem like a lot today, the fat torque curve makes this C3 feel quick around town and makes it easy to dispatch lesser cars. A few chrome bits dress up the under-hood area, along with Chevy Orange valve covers that are a traditional touch. You can see that there are quite a few new components under the hood, so someone's been taking care of this 'Vette, so you shouldn't think twice about heading out on the road with it. Underneath, it's quite original but again shows signs of conscientious ownership over the years, and the TH350 3-speed automatic transmission gives it great point-and-shoot capabilities. Rally wheels were standard, although these now carry spinner center caps for a slightly custom look and wear fat 255/60/15 BFGoodrich T/A radials that totally fill the fenders.

Where else are you going to be able to own an icon with fresh paint and interior, V8 performance, and an awesome color combination for so little cash? Don't expect this one to stick around, call today! 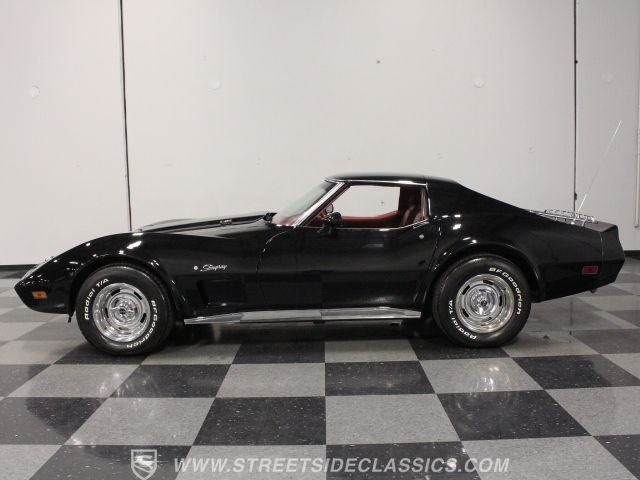