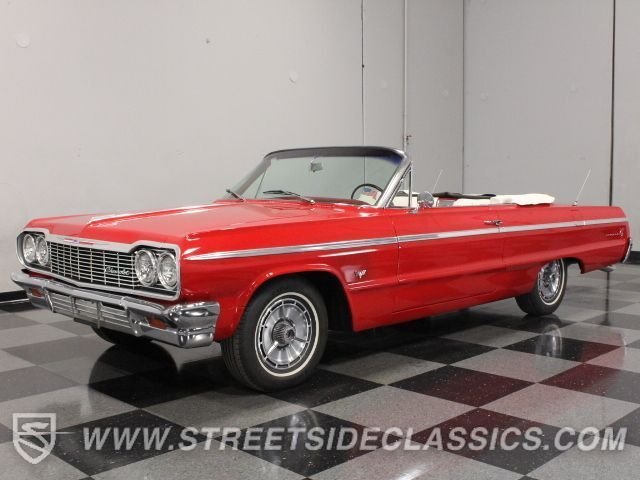 The ever-popular early-60s Impala remains on a lot of Chevy fans' must-have list. V8 power, room for five, and incomparable style that nobody else could quite duplicate all make this 1964 Chevy Impala convertible a red hot collectable.

Hard not to fall for a Riverside Red Impala ragtop, isn't it? The fresh 1964 restyle gave the Impala a clean, uncluttered look that is especially sleek in convertible guise. There's still lots of shiny stuff, but the restrained body sheds the last of 1950s glitz in favor of a muscular, purposeful look that's ideally suited to a V8 cruiser like this. An older restoration that's holding up well, this is a sharp driver that is more like a one-car parade than mere transportation. The vivid red paint captures the original Riverside Red hue pretty well, a bright, pure red that looks racy and sophisticated at the same time. The bodywork underneath ain't too shabby, either, and the unique side sculpting doesn't allow for bad panel alignment or sloppy workmanship. Traditional Impala design cues are still there, including the triple taillights under an engine-turned insert, twin antennas, and long side trim that makes this car look low and sleek, and the chrome delivers just enough shine to offset the red without stealing its thunder.

The red and white interior has a sporting look that perfectly bridges the Impala's sport and luxury mission. The upholstery was restored with the rest of the car a few years ago, and while it shows a few signs of age, most folks who see it seem to think it only enhances the look. It's comfortable, informal, and inviting, yet not so pristine that you're afraid to sit in it without a clean suit. The front seats show minor wear while the back seat and carpets look almost untouched and the door panels are crisply styled and in good shape. A wide pod houses all the major controls and gauges, with the wide instrument panel up high so it's easy to see. All the secondary controls are in an engine-turned panel flanking the tilt steering column, and they include a newer AM/FM/cassette stereo head unit in the dash. There's more engine-turned trim on the center console, which houses an automatic shifter lever that's like a miniature chrome sculpture. The white power convertible top looks great, and includes a matching white boot. And like all full-sized cars of the era, the trunk is positively huge and carries correct reproduction mats and a full-sized spare tire.

A 300 horsepower 327 cubic inch V8 means that this ragtop moves like a legitimate muscle car. The small block Chevy powerplant will look instantly familiar with its bright orange paint and barrel-shaped fan shroud, and it's nice to see that it's almost entirely stock. The original air cleaner wears reproduction decals, as do the valve covers, and the only notable upgrade is an alternator in place of the original generator. It's backed by a set of glasspack-style mufflers that sound awesome and a 2-speed PowerGlide automatic transmission. As a convertible, the frame is critical, and while it's not now show quality, there are no issues like those that haunt its northern brothers. Factory hubcaps give it the right look and spin inside 215/75/14 Uniroyal whitewall radials.

There are a lot of reasons why the Impalas remain popular year after year. You can find out what they are simply by sliding behind the wheel of this lovely convertible call today! 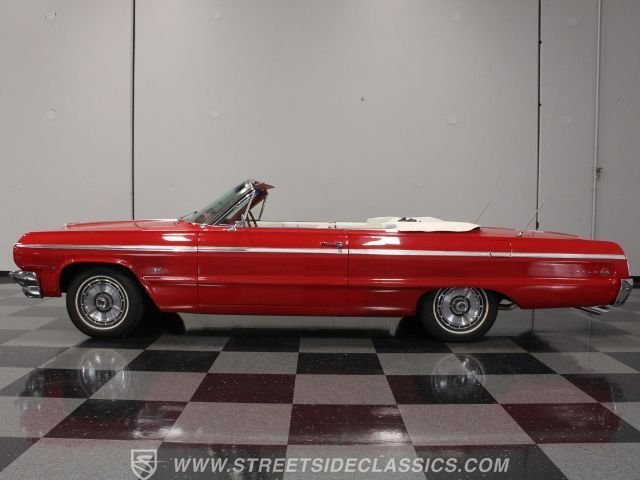