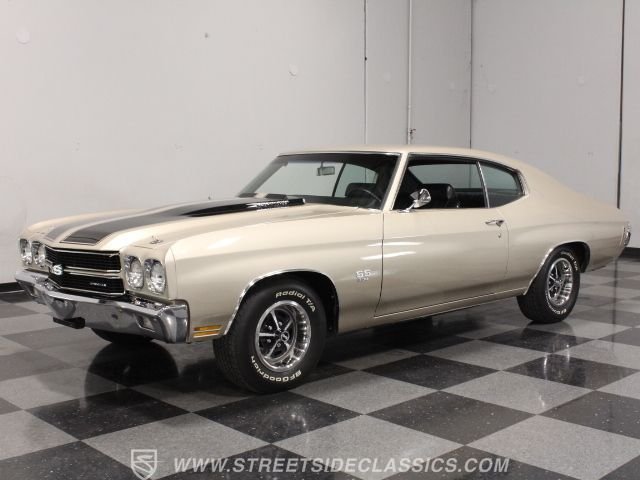 Take a good look at this 1970 Chevelle SS396, because they don't get much nicer. Better yet, it's got a stout numbers-matching L34 big block under the hood, and thanks to a few choice upgrades, it's one of the finest heavy-hitters we've featured in a long, long time.

Code 44 Champagne Gold has never looked as good as it does on this car, whose current color is a fairly close facsimile called Cashmere Silver Pearl Metallic. The contrast of the subtle color with brutal SS stripes on what is arguably the pinnacle of muscle car evolution makes for one heck of an appealing package. The meticulous bodywork was done a few years ago, yet thanks to expert care ever since, it still looks amazing. It was stripped to a bare shell and refinished from there using two-stage urethane, so the shine is unbelievably deep and clear and the black SS stripes were buried under several coats of clear to make it truly stand out. All the stainless trim was removed and professionally polished, the bumpers were re-chromed, and the weather-stripping and body mounts were replaced, making this car feel like new as it hammers down the highway. The original glass is still in place, but even that was removed, polished on both sides, and reinstalled using fresh gaskets, so you know there were no corners cut during the build. To put is simply, this car looks amazing.

The interior was completely removed for the restoration and the front bucket seats received new springs and foam underneath the new reproduction seat covers. New carpets and tons of sound-deadening material keep it especially hushed inside, and aside from the gauge pod and radio housing under the dash, it's quite OEM. The center console has the always-cool horseshoe shifter for the TH400 3-speed automatic transmission, and the 3-spoke steering wheel looks like it was just installed yesterday. The factory gauges still show bright markings and clear lenses, and we strongly suspect that the 72,975 miles showing on the odometer is a correct reading. The original AM radio is still in the dash, but as I mentioned, there's a modern AM/FM/CD stereo head unit down low, which is powered by a 500-watt 5-channel Kenwood amplifier and augmented by a 10-inch subwoofer neatly installed in the trunk. And speaking of the trunk, it also offers a correct mat and full-sized spare tire with cover.

The engine is the original, numbers-matching L34 396 (well, 402, but who's counting?), but during the restoration it was rebuilt to generate substantially more than the original 350 horsepower. Madcap Racing of Denver, Colorado was tasked with rebuilding the big block and they went all-out. The forged crank and rods were shot-peened, and the entire rotating assembly was balanced. The block itself was bored .020 oversize and then fitted with Speed-Pro forged aluminum pistons with 9.7:1 compression. Comp Cams supplied the valvetrain, including roller rockers, and the heads were ported and polished to work with the big Holley 750 4-barrel carburetor up top. It wears Chevy Orange paint, but you can tell at a glance it isn't stock anymore, although the overall look is restrained. The TH400 3-speed automatic was rebuilt with a B&M shift kit, and the 12-bolt was filled with Richmond 3.73 cogs on an Eaton limited slip. Ceramic-coated headers, Flowmasters, and rebuilt suspension components round out the hardware list, along with a set of correct SS wheels wearing 235/70/14 BFG radials.

Complete with owner's manual, receipts and a magazine feature, this is one impressive Chevelle. If you like your cars fast, polished, and ready-to-rock, few can do it better than this. Call today! 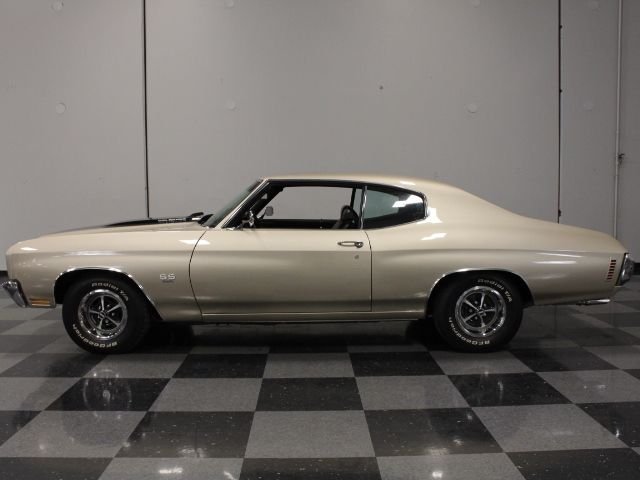