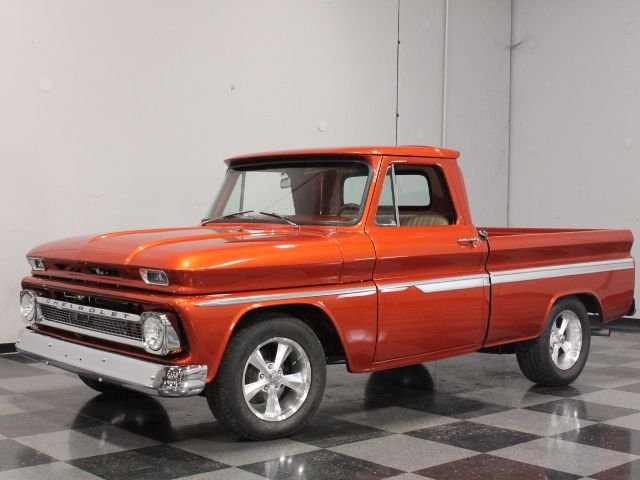 With several hundred shiny cars sitting in the showroom, you can imagine how hard it can be to stand out. Well, when this 1965 Chevrolet C10 showed up, there was a new jewel in the crown. With a fresh build that was completed in 2013, this big-block-powered pickup is one of the most amazing vehicles of any type we've featured. Serious cash was invested in the frame-off build, and if there are flaws on this truck, you'll need a magnifying glass to find them.

Who would have thought that Prowler Orange would look this good on a 50-year-old pickup truck? Part of the reason it works so well is because every inch of the cab and bed were smoothed, sanded, filled, and tweaked to look better than factory fresh before a single drop of the two-stage PPG urethane paint was applied. After it dried, they color sanded and buffed it to bring out the shine and eliminate any trace of orange peel in the finish, so when we say it stands out in a very competitive crowd, you know that it means something. A trick bed latch makes the tailgate look seamless, while the floor is beautifully finished wood and stainless with more smooth, shiny Prowler Orange paint that's just too nice to risk with construction supplies. All the chrome and trim is new, too, so there are none of the usual issues there and instead this truck presents like a trophy winner, which is what it's poised to be.

The incredible interior is at once fairly stock and wonderfully modified. There's a wide bench seat as original, but it's wrapped in unusual Oyster-colored leather that not only works well with the paint job, but gives it a sophisticated look that belies its working-class origins. Matching carpets and full door panels enhance the upscale image, and the instrument panel has a billet insert full of pretty cream-colored Dolphin gauges. A wood steering wheel gives you a little more room to maneuver than the original giant tiller and hangs on a polished tilt column. In the center, there are controls for the Vintage Air A/C system and the AM/FM/iPod stereo radio and the entire wiring harness is brand new. Even the sun visors were restored and recovered in matching materials to give it a very polished look inside.

Effortless power comes from a 1970 402 that's been punched out to around 420 cubes and stuffed with a roller valvetrain and a polished aluminum intake. A 750 CFM Holley-style QuickFuel carburetor feeds the muscular big block, and it's been dressed for show with tons of polished aluminum and chrome, including those gorgeous finned valve covers. A modern serpentine belt drive system for the accessories gives it reliability and good looks and it's obvious that someone spent a lot of time on the little stuff to make it look neat and tidy. Power steering and power front disc brakes were added during the build, and the power is transmitted by a built TH400 3-speed automatic transmission and 12-bolt rear end with 3.73 gears inside. It's as sharply detailed underneath as it is up top, more evidence of a top-notch build, and with those twin Flowmaster mufflers, it sounds downright ferocious. Pretty 17-inch Torque Thrust style wheels wear 235/65/17 front and 275/60/17 rear Toyo radials that fill the wheelwells with just the right amount of sidewall.

An extraordinarily impressive truck, there's way more than the asking price tied up in the build, and we have the receipts to prove it. If you want the best, this might be it. Call today! 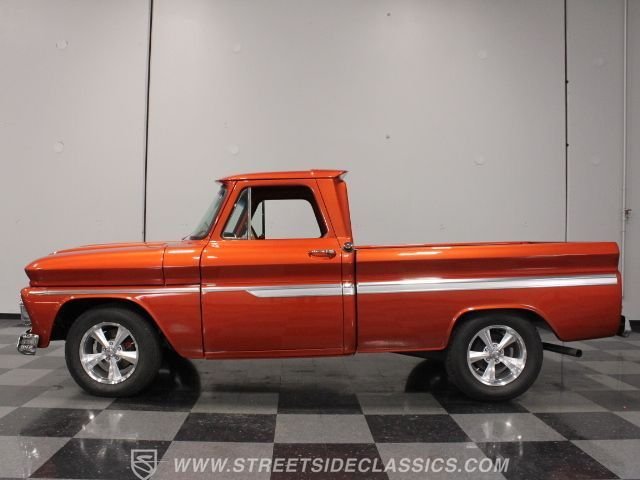