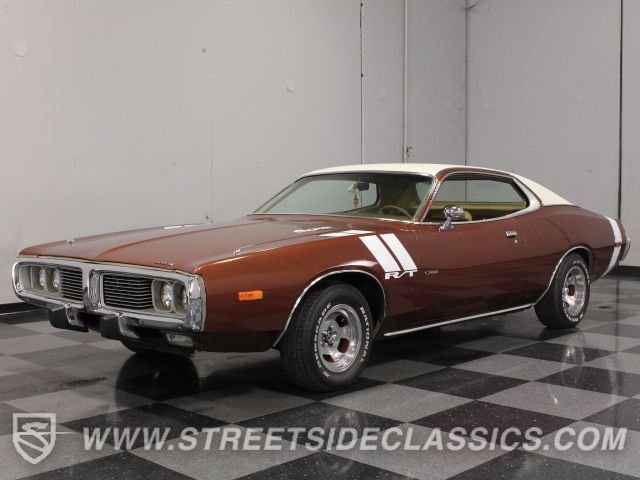 This 1973 Dodge Charger is a great tribute to the '70s, which is a look we find is getting more and more popular every day. Although they're still not for everyone, the guys who grew up with cars like this remember them fondly, and today they're inexpensive V8 fun that still demonstrate a lot of street presence.

If you're going back to the '70s, do it right. Nobody was still making horsepower as well as Chrysler in 1973 and this Charger, complete with R/T decals, certainly looks racy. Amazingly, it appears that the bronze paint is almost entirely original, suggesting that even when it was new, this car was treated like something special. No questionable bodywork, no modifications, just a clean, sporty Mopar that still has the performance look. Fuselage styling was new and gave the Charger a more modern look than many of its contemporaries, and with improved fit and finish, the Chryslers were pretty darned nice cars. The vinyl top softens it a bit and looks every bit as good as the rest of the car, and while the R/T badges are not original to the car, they look good and fit well. The big chrome bumper that doubles as the grill surround gives the Charger a low, sleek look and the handsome rear end features more shiny chrome in good condition.

That long, low styling enhanced the interiors of all the Mopars, too, with the cockpit of the Charger being a very inviting place to spend some time. Again, it appears to be almost entirely original and save from some wear on the driver's side seat bolster, it looks years younger than it is. A wide bench seat reveals the Charger's dual sport/luxury mission and the instrument panel puts all the controls at your fingertips, plus power windows on the door panel, which are a rather unusual feature. The odometer shows 56,411 miles, and given the condition of the entire car, it's easy to believe that's authentic. As a tribute to originality, even the factory AM radio remains in the dash, a unique head unit that puts both control knobs on the left. Carpets, door panels, and particularly the back seat are quite nicely preserved and even the trunk still carries its original mats and jack assembly.

V8 power was still in fashion in 1973, and the 318 cubic inch V8 under the long hood of the Charger delivers the same torque and sound as its older siblings from a few years earlier. Thanks to upgrades like a Holley 4-barrel carburetor, Mopar Performance intake manifold, and a 2.5-inch Flowmaster dual exhaust system, it definitely feels more energetic than most 1973 offerings. A new aluminum radiator is a reassuring addition to the roster, and thanks to a Mopar Performance dress-up kit, it has a traditional muscle car look. The 727 TorqueFlite 3-speed automatic is a freshly rebuilt unit, which feeds the original 8.75-inch rear end, which now hangs on a set of air shocks. You'll be pleased to see how tidy the undercarriage is, more evidence of this car's low-mile status, and those period mag wheels with staggered radial tires give it a performance stance.

A great survivor that's also quite handsome, this is a great entry-level piece of Mopar muscle that's a blast to drive. And if you're from the era, then you'll appreciate the special vibe it offers, particularly compared to its competition. Call today! 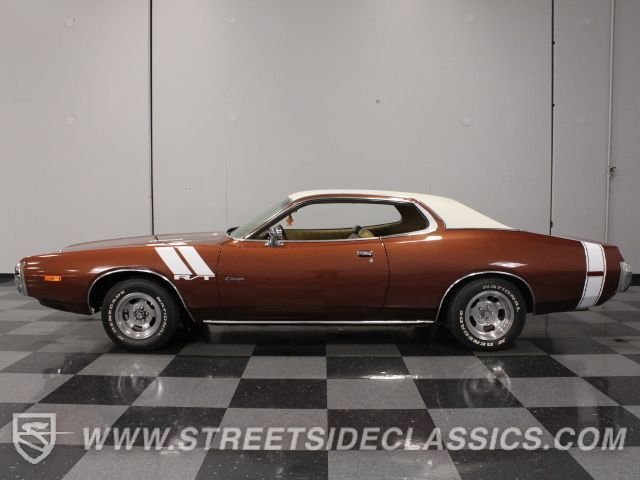