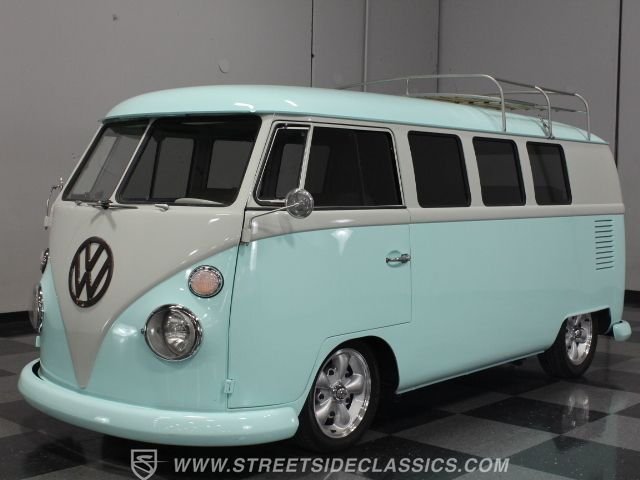 This 1967 VW Westfalia microbus is the coolest vehicle to wear a big, round VW badge, maybe ever. Even without the slammed stance, upgraded suspension, and icy slick paint job, early VW buses are red hot, and with the mods, this one is simply off-the-charts. Just imagine showing up at the campgrounds in THIS!

Iconic? You bet! Practical? Absolutely. And quite honestly, there's no Ferrari made that can attract a crowd like this amazing VW. It brings back great memories for older folks and it's been rediscovered by the younger folks, so it has universal appeal, and the things that make it great are both traditional and modern. Traditionalists will love the unmodified body, which is pure VW practicality in an upright box, while the period-perfect turquoise and gray paint will fit right in at the next cruise night. Other things like the body-colored bumpers, roof rack, and tinted windows give it a retro-cool look that sits right next to today's hottest performers. In short, there's no place this VW won't be welcome. Fortunately, with all that attention focused on it, you'll be proud of the beautifully done body and paint work, the precise fit of all the doors, and the soft shine of the paint, which looks right for something that's coming up on 50 years old. You can't build style like this, you have to be born with it and with this VW, it's been honed to a razor-sharp edge.

The interior is very functional and very traditional at the same time. Despite the tinted windows, it's bright and airy inside, with tan upholstery and light-colored wood fixtures in back. Durable sisal carpets have the right look and the vinyl upholstery is durable enough to use in a school bus. The no-nonsense dash is pure VW, with a single gauge pod for the driver and minimal controls, although a modern AM/FM/CD stereo head unit has been fitted into the dash with box-style speakers underneath. Amidships, you'll find a functional kitchenette with table, seating, and a sink, plus plenty of clever storage nooks all around. And honestly, despite its diminutive size, who wouldn't want to spend a weekend hanging out here? Even the sleeping area in the back is inviting in its own minimalist way. And it's all very well restored and nicely detailed, with a lot of time and money invested in the final results.

The engine is a warmed-over 1600cc flat-four with that unique VW soundtrack. However, it sports a few upgrades that help push this slightly rounded brick through the air with greater efficiency, including 87mm pistons and jugs, dual port heads, and a weber carburetor. The engine bay is nicely detailed and so shiny you'll be as eager to show it off as the interior, and it runs down the highway at modern speeds without breaking a sweat. Part of that is due to the Wagons West swing-arm suspension conversion and a narrowed front beam, and while you're underneath, take a moment to admire just how solid and robust the undercarriage really is. It's not as detailed as the engine bay, but it's really, really nice. The lowered stance looks cool without sacrificing practicality, and with those shiny wheels and 195/50/15 Toyo radials, it has a distinctly modern stance.

Everyone thinks this is a cool bus, and with the prices on its siblings skyrocketing, it very well may be a smart investment, too. Call today! 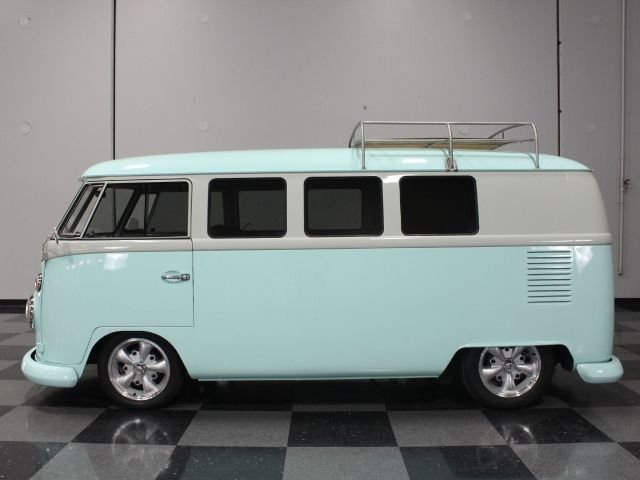