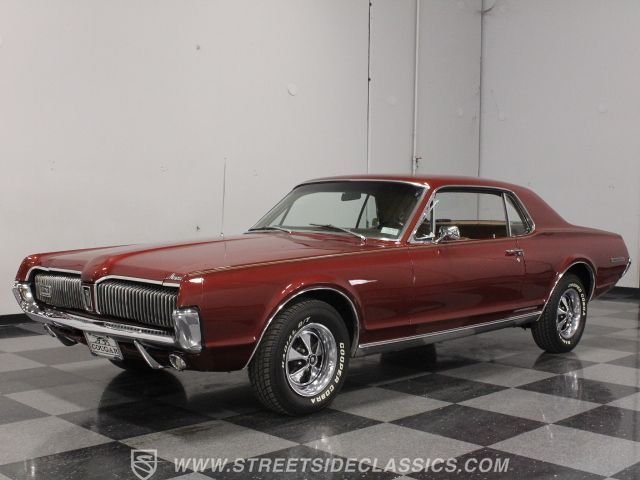 Go to any car show and you're guaranteed to see row after row of early Mustangs, but what you won't see is another 1967 Cougar as nice as this one. With the same great 289 as the Mustang, and with a more upscale overall look and feel, the Cougar remains an appealing, affordable alternative to the usual pony car.

OK, so the guys in charge of naming colors at Mercury weren't the most creative fellows around, but the handsome Burgundy paint looks exactly right on the slightly more formal cat. There's no denying that there's some Mustang DNA flowing through its veins, but Mercury's mission was different from the Mustang and as a result they gave it a very unique look where almost none of the critical parts were interchangeable. And check out the considerably more detailed bodywork, with crisp folds for the peaked fenders and on the quarter panel, plus the slick hood that includes a central power dome that would be Mercury hallmark for years to come. The paint was done a few years ago and shows signs of use, but that doesn't do anything to diminish the overall good looks, and it's easy to see that this car has led a pretty good life. The chrome is in good condition and highlights the folding headlights and "electric razor" grille, plus the taillights that were clearly designed to match. There are a lot of enthusiasts who will argue that the first Cougar was also the best-looking, and this car makes a compelling argument.

The Cougar can also lay claim to a more luxurious and attractive interior than the Mustang, and rendered in tan it speaks volumes about the car's intended audience. Handsome bucket seats have been reupholstered with newer seat covers, the door panels have neat textured inserts, and there's a center console trimmed to match the padded dash. A few well-chosen pieces of woodgrained material warms it up a bit, and the same "garage" storage compartment found on the '67 Mustangs can also be found here. The gauges appear to be original and in good condition with some light fading, but otherwise the interior remains a high-class place that perfectly captures the swinging '60s vibe. From the slender chrome shifter for the 3-speed automatic transmission to the aircraft style controls for the heater and defroster, chrome was definitely in style. For entertainment, this one has been upgraded to an AM/FM/cassette head unit with speakers on the rear package shelf, and the trunk is finished with a reproduction mat and spare tire cover.

The same snarling 289 cubic inch V8 powers the Cougar as the Mustang, and thanks to a 4-barrel carburetor, it makes 225 horsepower and moves the handsome hardtop with ease. Dressed in Ford Blue livery, it's quite stock, right down to the original air cleaner. It starts easily, looks right, and is a delight around town or on the highway, where the muted burble from the dual exhaust sounds exactly right. The C4 3-speed automatic transmission was recently rebuilt and spins the original rear end, and while the undercarriage is quite original, it's also in very good condition. Those handsome wheels are reminiscent of the Mustang's styled steel wheels and wear newer 205/70/14 Cooper white-letter radials all around.

A handsome, upscale coupe that will stand out simply because it isn't the usual pony car. With a long-term owner and lots of receipts, why not give this big cat a try? Call today! 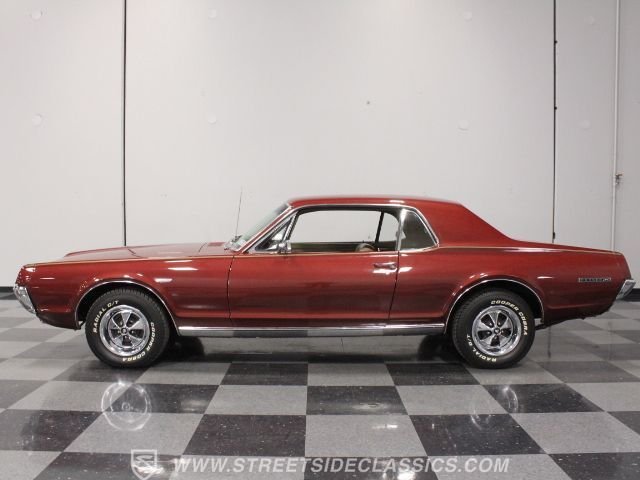