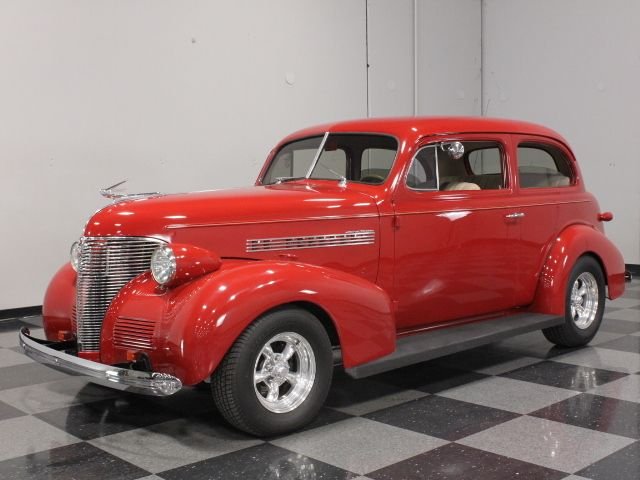 You're seeing more and more rods like this 1939 Chevrolet Master Deluxe for a number of reasons. First and foremost, sedans (both two-doors and four-doors) from this period are some of the most handsome cars ever designed and look good no matter how you dress them. They're also plentiful and affordable and if you have a family, there's no better way to cruise the highways of America than in some vintage American iron with a small block V8 purring away under the hood.

Built in the mid-2000s, this all-steel 1939 Chevy showcases some of GM's best design talent before the war. Streamlined and sleek, the swept-back grille and rounded fenders give even the entry-level Chevy a substantial, important look. None of the bodywork has been altered, although the design came from the factory looking like it had already been chopped, suggesting that those guys back in the '30s knew cool when they saw it. Vivid red paint wasn't on the menu in 1939, but it looks fantastic rendered in modern urethane and highlights the many details on the car that look custom, but aren't. Take those taillights, for example, which are exactly the way the factory made them save for blue-dot lenses. Bodywork and the finishing on the paint are quite well done, and while it does show some signs of use, this is a car that will serve you well for cruise nights and events like the Power Tour. It's also nice to see the original chrome fully intact, including that sweeping grille, full bumpers fore and aft, and the delightful emblem on the deck lid just below the license plate.

The interior got a full makeover as well, but like the bodywork, respects the original design. That appears to be the original bench seat, fully upholstered in a combination of tan vinyl and cloth, and the rear seat has been finished to match. The wide pleats are quite similar to what was there in 1939, and the custom door panels have an art-deco flair that looks right. Billet instrument panels house modern VDO gauges, and there's still a clock in front of the passenger, just like there has been for the past seven decades. A/C has been tucked under the dash and there's a modern JVC AM/FM/CD stereo head unit neatly installed front and center. Combined with a tilt column and leather-wrapped wheel, this really is a fine place to spend a weekend and it's easy to feel instantly at home in this Chevy. Even the trunk is big enough for a road trip, and includes a space-saver spare.

A 350 Chevy and reliable TH350 3-speed automatic transmission deliver the power and the engine bay is dressed for success. Some chrome dress-up, finned valve covers, and decent service access all mark a well-designed rod. Edelbrock supplied the 4-barrel carb and the ceramic-coated headers and Flowmaster mufflers give it a suitably muscular tone that is entirely right on a rod like this. Power steering and power front disc brakes mean it handles like a modern car, and the staggered Torque Thrust wheels with 215/70/14 front and 235/70/15 rear tires add just the right rake.

Not all rods have to be priceless roadsters and coupes, and if your interests run to driving and cruising with family, then perhaps this 1939 Chevy two-door sedan will fill the bill even better. Call today! 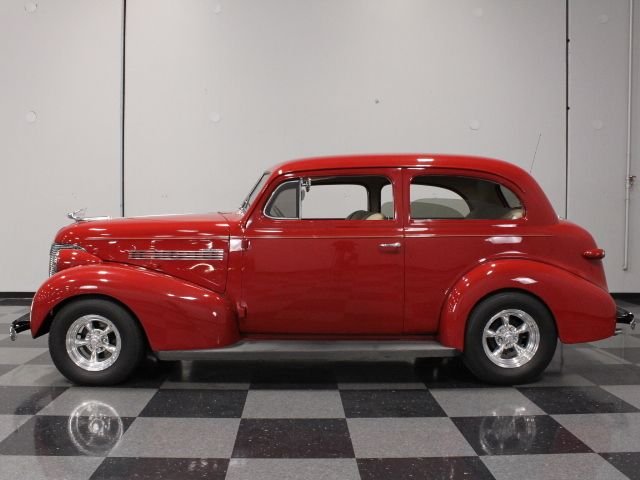