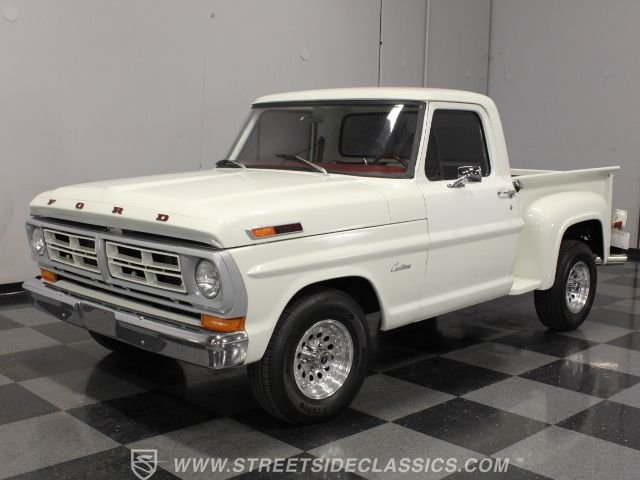 You can tell at a glance that this 1972 Ford F-100 has a lot invested in it. The subtle white paint doesn't give away much, but underneath there are a lot of details that took time and money to get right. And if you like the vintage look of a step-side bed, this truck is a great blend of old and new that will stand out wherever you go.

These were as popular in the 1970s as the F150 is today, so you undoubtedly saw them running around when you were a kid. Ford made them handsome in a rugged sort of way, and now that age and use have weeded out many of them, the nice ones like this tend to stand out. Given the shine on the paint and the fit of the bodywork, someone has quite a bit of time wrapped up in this one and they gave it a cool look without resorting to flashy graphics or other modifications. Those fat rear fenders definitely give it a tough-guy attitude that makes it immensely appealing, and the tinted glass only helps. The grille is in remarkably good condition and I like that it's painted instead of chromed, helping to keep the sleek look. Note that the FORD lettering on the hood has a touch of red in it to match the interior, while the tailgate spells it out in big, black block letter. The bed itself is still wood (yes, even in 1972!), and it has been refinished with the sides protected by spray-in bedliner material. It's cool-looking while remaining completely usable.

The bright, cheerful red and white interior is the prefect contrast to the all-white bodywork, offering a dose of original flavor with a custom touch. The seat cover, door panels, and dash were all color-matched to give it a new look, and a few upgrades make it very comfortable for long hauls. The most visible upgrade is the shiny new wood-rimmed steering wheel, but you'll also find period-correct under-dash A/C (it works!), a trio of power outlets for phones and navigation, and a center-mounted set of cup holders, which you don't really appreciate until they're missing. The original gauges monitor the engine and yes, that's the original AM radio in the dash, but it's either appealing vintage kitch or an easy swap to the entertainment system of your choice. Regardless, this is a great place to spend some time.

The engine is Ford's truck-only 360 cubic inch V8, nicely dressed in Ford Blue and without any significant modifications to affect reliability. With torque as its primary calling card, this engine does a great job of moving the pickup around with authority and thanks to power steering and upgraded front disc brakes, it feels light on its feet around town. Nice details include the original air cleaner with decal, a few red painted components to add some contrast, and plenty of evidence of care over the years. A throaty Magnaflow exhaust system sounds great and as long as you're looking around underneath, note how clean this truck really is. A 3-speed automatic powers the original 9-inch rear with easy-cruising 3.00 gears inside, so this really is a nice highway cruiser. Flashy aluminum wheels with fat blackwall radials give it just the right look.

A nice old truck with a lot of fresh work, this Ford preserves the look and feel of the original and gives it a new lease on life. Call today! 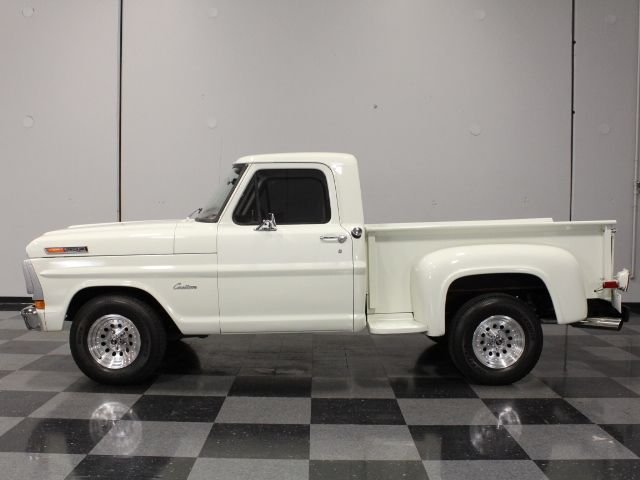