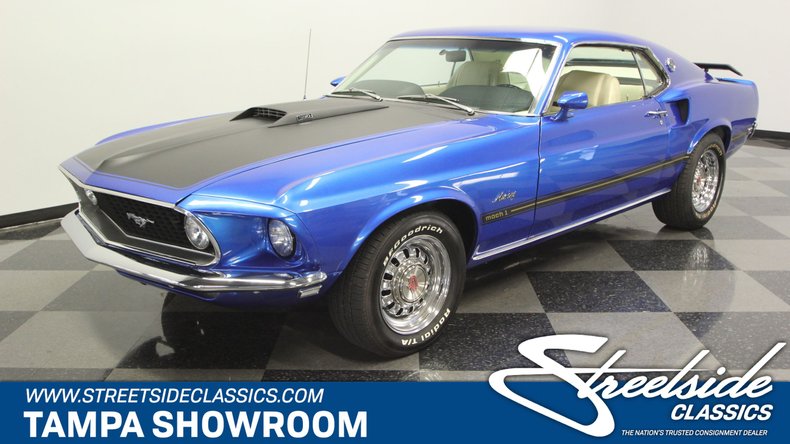 The 1969 Ford Mustang Mach 1 is one of the baddest-looking street machines of all times. But finding one this unique is the true treasure. The original 390 V8 is still under the hood, but it's been rebuilt with sturdy and speedy components. And they made plenty of other great investments all around the car – from the A/C interior to the shimmering paint.

We know you love the color on this coupe. It's called Stratto Blue. It looks akin to 1969's Acapulco Blue, except there's an undeniable radiance that comes from the modern color. There was nearly $8k invested in the paint alone, and the restoration photo book will show you it has been a long journey to the deep blue ocean you see today. They really took time and care in this restoration, and that's why the panels are so straight and the bumpers shine like mirrors. And of course, they took the time to get the sporty details right. The hood alone is a great aggressive piece with its large scoop and full blacked-out treatment. Then, add in more features such as the fastback profile, side stripes, and full-length rear spoiler - this is a full intimidation package right down to the shining GT wheels.

Ford was going upmarket with the Mustang at this time, and a great way to showcase that is with a pristine white interior. It's an ideal pairing where the light-colored vinyl cleans up in a snap, and the black carpeting hides any dusty shoes that might enter. The woodgrained steering wheel matches the paneling on the dash, console, and doors, which all adds to the upscale ambiance of the Mach 1. In total, you'll love the investment that was made in this coupe, because it looks like a time machine taking you back to 1969 with all the correct details. Even the AM/FM stereo is still cranking out tunes! In fact, the most noticeable modern upgrade is one that you don't see, but instead you feel it. The restoration included the addition of a modern R134a air conditioning system. And you might have noticed the well-placed addition of a tach on the steering column, which is an indicator that you'll love what's under the hood.

This S-code Mustang left the New Jersey factory with a 390 cubic-inch V8, so it's great to have the date code correct block still under the hood. But one look at this tidy and shining setup will tell you that there was plenty left in the restoration budget for upgrading. The motor has been enhanced and fortified, and it includes the block was machined .03, the crank was machined .01, and new 30mm oversized pistons were added. The head was milled before adding new valves, springs, and lifters. It features a Howards camshaft, Clevite bearings, and Protronix II electronic ignition. The consignor went to extra lengths with some original components – including stating the original water pump was rebuilt, original exhaust manifolds were re-coated, and the original radiator has a new core. This V8 is topped with an Edelbrock intake and a large Holley 750 CFM four-barrel carburetor. So it makes plenty of power while also giving a sweet tune to the H-pipe dual exhaust. But don't just listen to the rumble; check out its path in the undercarriage photos. There you'll see more evidence of a fresh restoration were no expense was spared. The three-speed automatic transmission is believed to be original, and it was rebuilt to ensure crisp shifting. Plus, with power steering and power brakes w/discs up front, it's easy to show off this stunning Mach 1 everywhere.

This is car has so much originality and investment that you'll be glad the sale also comes with build receipts, restoration photos, maintenance records, and the Marti Report. This is the Mach 1 you've been waiting for, so don't let it slip away. Call today!!! 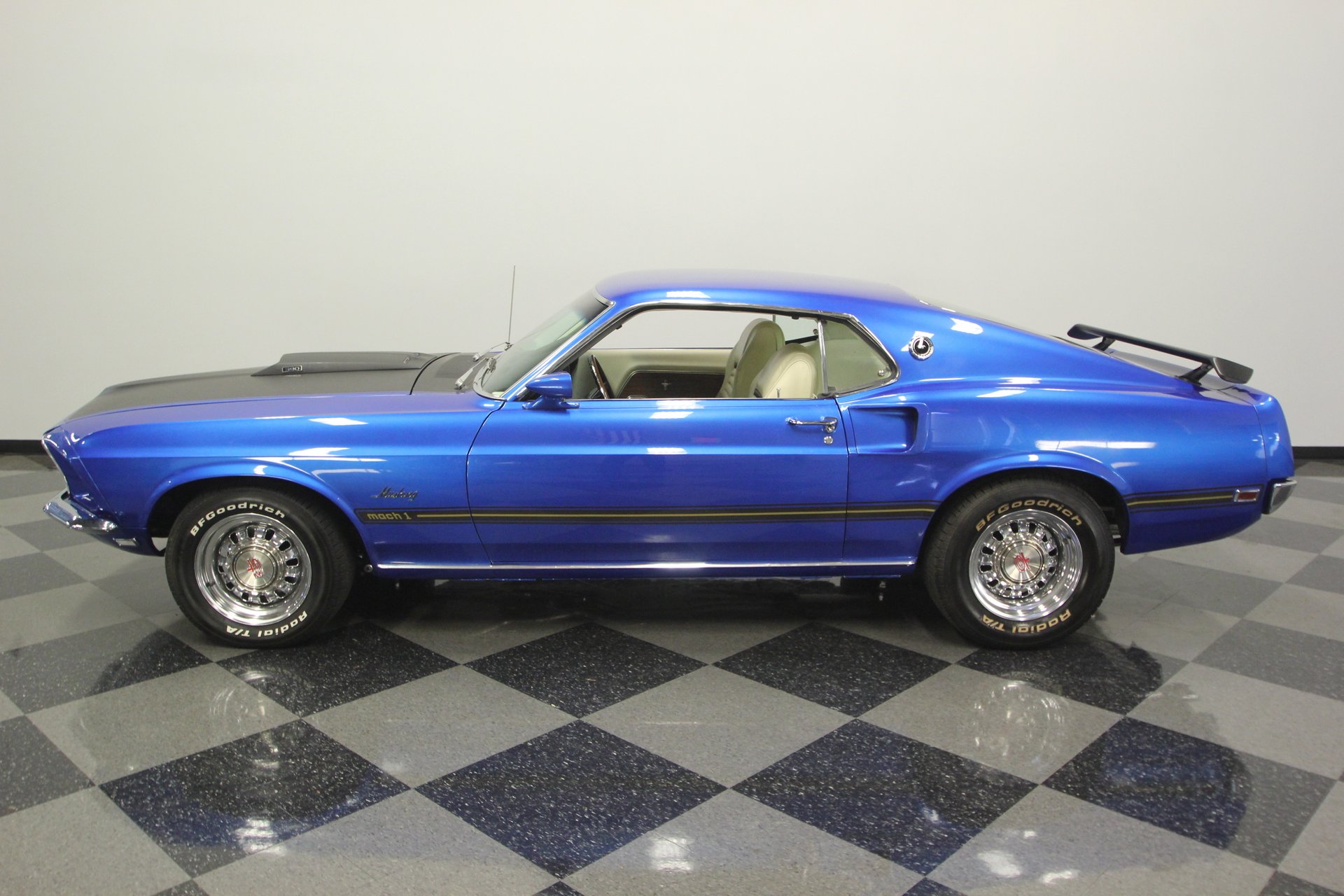