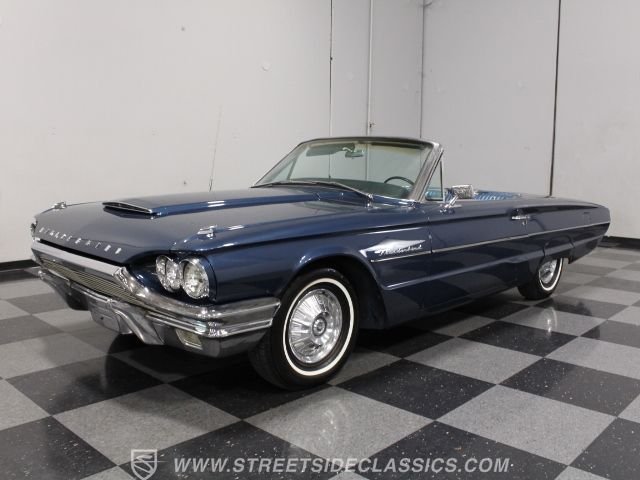 What a lot of folks don't seem to realize is that this 1964 Thunderbird convertible is more Lincoln than Ford. Luxurious, powerful, and with a wonderfully intricate top mechanism, it's top-down luxury at a shockingly affordable price.

Following a repaint in 2010, this Caspian Blue T-Bird is one heck of a good-looking car. The gentleman who was restoring it passed away before he could see it completed, but that doesn't mean it can't be enjoyed right now, but rather that it does have a few things you can fix and personalize along the way. As a life-long Georgia car, the frame-one restoration was made easier by starting with a solid car, and the straight bodywork with razor-sharp creases shows it off to great effect. The paint has the right look, with just a hint of metallic in it, and the color certainly looks elegant on the upscale Thunderbird. All the traditional design cues were there, including a hood scoop, fender skirts, and twin taillights that still look like some kind of modified jet exhaust ports. The doors fit well, the hood lines up just right, and with a turn of the key, you have access to the trunk area via the same electric motors that make the top disappear, which is always a trick that draws a crowd. The chrome and stainless looks quite good and is a combination of original and restored items that give the car an all-of-a-piece look that's quite appealing.

The interior is largely original, which speaks volumes about the car's life and current condition. It appears that the carpets are replacements (maybe), but otherwise it is remarkably well preserved. Both front seats are still supportive and comfortable and with that swing-away steering column, it's easy to slide behind the wheel. Interior styling is wonderfully ornate, with individual spherical pods for the auxiliary gauges and a sweeping stainless panel that blends seamlessly into the center console. The A/C was recently and extensively serviced so it blows cold and if there's a better way for four people to get around, I can't imagine what it would be. The top is based on the mechanism that was used on the "Retractable" hardtops of the 1950s, so it's a treat to watch the gymnastics of it folding and stowing itself under the rear deck. The bright white top itself is new and looks great against the dark blue bodywork, although if you're like most T-Bird owners, you'll hardly ever see it.

The engine is the original 390 cubic inch V8 which delivers more than adequate performance and makes the 'Bird a superlative highway cruiser. Nicely detailed under the hood, it's dominated by the big gold air cleaner, A/C compressor, and expansion tank, but underneath is one of the more reliable and potent Ford powerplants of the era. Performance is effortless, the kind where you glance at the speedometer and suddenly realize you're going 15 MPH faster than you thought you were just because it's so easy. The automatic transmission is unobtrusive and there's a 9-inch rear out back, all of which are original to the car. Factory undercoating still protects the underbody and a recent dual exhaust system sounds appropriately muscular without being loud. 15-inch steel wheels with original hubcaps and 215/75/15 whitewall radials enhance the stock look.

Documented with receipts and a lot of paperwork, this is a bargain-priced luxury cruiser with all the hard work done. Perfect those last few items and you'll have a stunning convertible that's only going to get more desirable in the years to come. Call today! 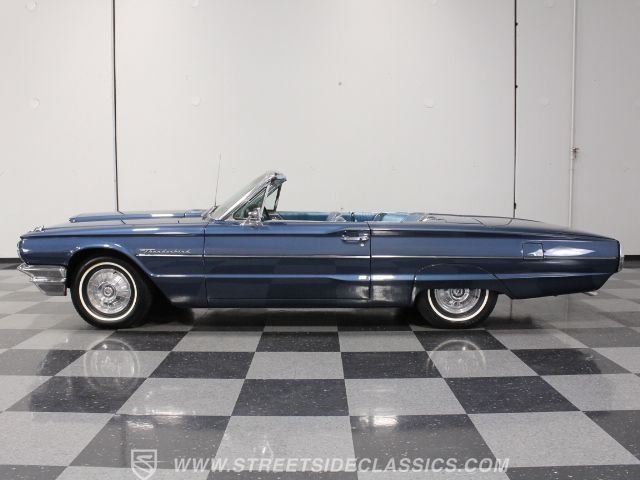