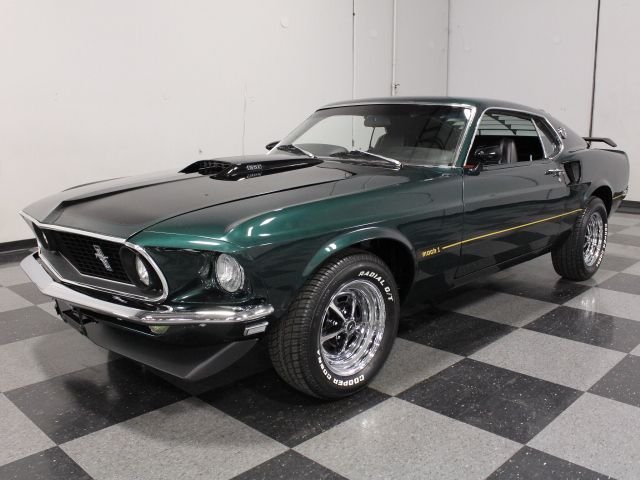 Prepare to be impressed, because this 1969 Mustang Mach 1 is not only a highly detailed show piece, but it also packs a stout 351 that'll make you forget all about its big block brothers. The unusual color is a big plus, too, so if you're looking to stand out on the street as well as the show field, this Mach 1 is definitely impressive. If you're already interested – keep reading – because you're about to find out why this one has it all, and might just be the best of both worlds.

Code 45 Silver Jade is rather rare compared to many of the other Mustang hues available that year, and although not the 'exact' match for that hue, there's no denying the appeal of modern twist on that color, and it gives this Mach 1 just the right combination of luxury and attitude. Actually, this one is mostly attitude, and with a chin spoiler, hood scoop, rear window slats, and a rear wing, not to mention the single yellow Mach 1 stripe, there's no mistaking this car's mission. Treated to a no-expenses-spared restoration, the bodywork is extremely impressive, with even gaps, a deep clearcoat shine, and body panels that are as crisp as the day they popped out of the stamping dies. The blacked-out hood treatment was correctly done, enveloping most of the hood, and the scoop proudly wears 351 badges and it would be unwise to tangle with this pony on the street. The grille, bumpers, and other shiny bits look fantastic against the dark green finish and if there's any criticism to be leveled against this car, it may be that it's simply too nice. I mean, I don't want to be the first guy to scratch it - do you?

Aside from a fat wooden steering wheel, the interior remains pretty much the way Ford made it, from the ribbed "comfort weave" seat covers to the woodgrained dash appliques meant to impart a sense of luxury to the Mach 1. Thanks to the restoration work, things like those seat covers, the carpets, door panels, and headliner were freshened to look like new, faithfully restored to the Marti Report specs. The gauges show crisp markings, bright needles, and clear lenses, so they've probably been to the restoration shop as well, and the center console with its Hurst cue ball shifter is practically mandatory on a sporting Mustang like this. A modern AM/FM radio slides into the original radio's slot in the dash without being too obvious about it. The back seat folds down to make for an impressive amount of carrying capacity for a pony car, and the trunk itself is neatly finished with a reproduction mat that offers a correct plaid pattern.

The M-code 351 Windsor under the hood is light like a small block should be, but packs a big-block-sized punch with 393 horsepower and 424 pounds of torque. Some of the goodies that make this possible are the 680 CFM Holley 4-barrel carburetor, ATK aluminum heads, and an MSD ignition system. On the other hand, despite the mods, someone did pay more than a fair amount of attention to the little things, including correct hoses and clamps, proper fasteners, and a factory-style radiator, which all give the engine bay a rather authentic look. Underneath, the chassis is highly detailed with fresh paint, shiny hardware, subframe connectors, and a mostly stock suspension setup. Long-tube headers feed a custom Flowmaster dual exhaust system with Y-pipe, so it sounds downright nasty. New shocks, gas tank, and lines mean that nothing has been overlooked, and the 15-inch Magnum 500 wheels with 235/60/15 BFGoodrich radials give it the perfect performance look.

I guess this Mach 1's new owner will have to decide whether he likes going fast or going to shows better. Actually, why not do both? With investment grade pedigree, Marti Report, a show-quality build, and an amazing resto-mod setup, this one is the best of both worlds. Call today! 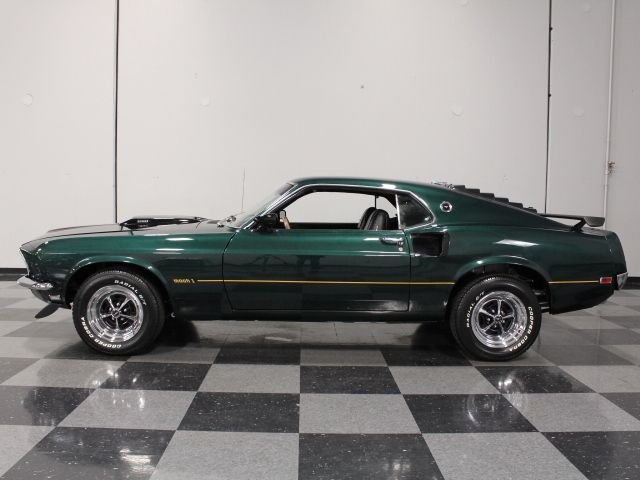