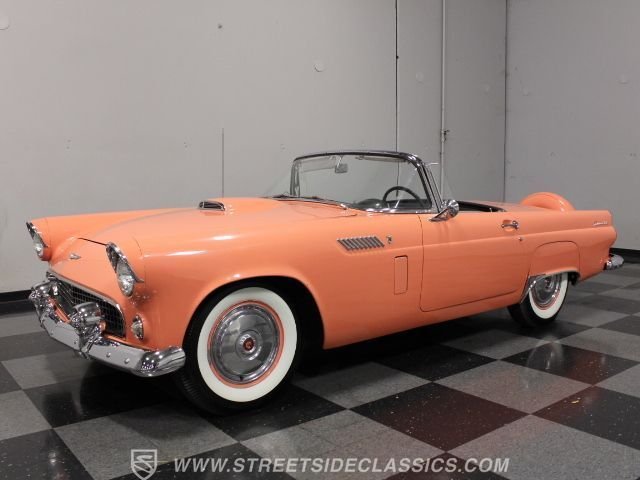 With so many early 2-seat Thunderbirds out there, wouldn't you rather have one that stands out from the crowd? This bright Sunset Coral '56 is not only a rare and unusual color, but also carries a 4-speed manual transmission that makes it a blast to drive and a pleasure to own.

To be up front and honest, this was originally a Raven Black car, but during the restoration, which was done sometime in the late-90s, the color was swapped for all the right reasons. The result is a flashy, attractive 'Bird that perfectly embodies the spirit of the '50s. Lots of chrome, a continental kit, and just two seats make this Thunderbird an icon regardless of the color. The paint is holding up well enough given that the car has been driven and enjoyed for the past several years, and you can still drive it proudly today. It fits together well, and the much-needed cowl vents fit flush and with the standard continental kit, many believe the '56s to be the most attractive of the early 2-seat 'Birds. And as for all that chrome, it remains bright and shiny with the exquisite detailing that typifies the mid-fifties Ford two-seater.

The code XA black and white interior was restored at the same time as the rest of the car and provides a dramatic contrast to the Sunset Coral paint. Also like the bodywork, it shows some signs of age and use, but there's an appealing look to the wide bench seat and stylish door panels. A power front seat was standard equipment on the Thunderbird, with controls on the driver's door panel , along with gorgeous engine-turned panels that wrap into the dashboard. A big, centrally-mounted speedometer is flanked by a tach and clock, all of which are in good original condition. A/C was installed under the dash in a very original-looking housing, but there are modern components behind the scenes.. But perhaps this car's biggest surprise is the 4-speed shifter, which makes it a delight to drive and more sporting than many of its siblings. A new convertible top was recently installed and the original porthole hardtop is also included. And thanks to the relocation of the spare to the rear bumper, the trunk is surprisingly spacious and useful.

Under the hood you'll find Ford's Y-block V8, which powered all early Thunderbirds in one form or another. It's a great travelling companion and the right choice for a grand tourer like the Thunderbird. Wearing the popular dress-up kit that includes the chrome air cleaner and gorgeous valve covers, the bubbly V8 looks fantastic and runs just as well. They made a lot of effort to get the details right during the restoration, so there's Ford Red paint on the block, a 4-barrel carburetor on top, and cast iron exhaust manifolds feeding a subdued dual exhaust system. The chassis is tidy although not detailed for show, and a recent gas tank ensures future reliability. It even wears correct 6.70-15 wide whitewall bias-ply tires on the original wheels with full wheel covers.

Yes, there are lots of Thunderbirds out there, but not many as dramatic as this '56. Nicely finished, but not too nice to drive and enjoy, you really need to drive this one to fully appreciate it. Call today! 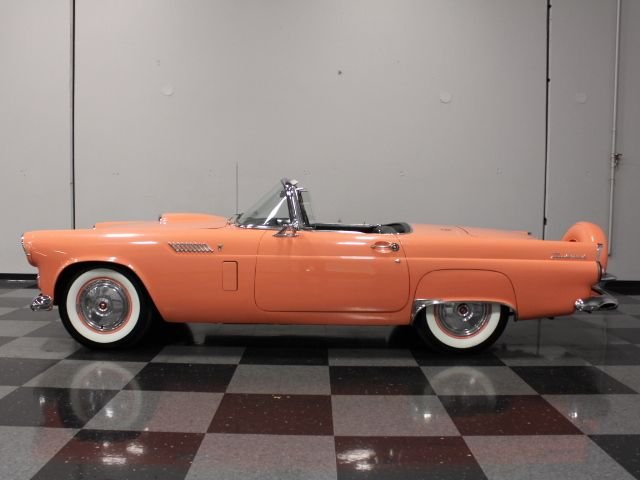